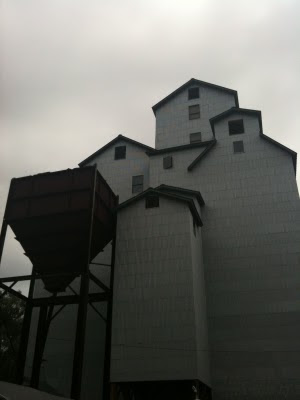 Climb up the narrow stairwell at Maxon Mills in Wassaic, NY and peek into the dark openings overlooking a seven-story shaft that murmurs and hums with a deep, damp hollowness and the sound of various recordings by Leah Rico at each landing. The space is sublime. So is the artwork that sits within its cathedral-like exterior.

Artists from all over the United States exhibited their work at the Wassaic Project on August 13-15, enliving the small hamlet, which is part of the town of Amenia about two hours north of New York City along the Harlem Line of the Metro-North commuter rail train. Visitors poured in from all directions and populated a designated camp ground with their tents and then rushed toward the Maxon Mill, once used as a grain elevator, to see the art and enjoy the live music on the front porch of the hotel that adjoins the seven-story industrial structure. The hotel is also no longer a hotel. Small rooms with slanted floors and half-height walls that allow natural light into the spaces through heavy-timber columns and beams housed a photography exhibit consisting of medium-size pigment and inkjet prints. It would have been a squeeze to have more than two people in each room perusing the exhibit. On a chiaro-scuro mezannine, a lone piano basked in the sunlight streaming through the windows, its keys rising and falling and clicking. No sound was produced. It was an exercise in silence and automation. Back on the main level of the hotel a tilted wooden model of a city block with photos pasted to the rooftops invited visitors to look through a magnifying monocular, which deciphered the contents of the photographs, otherwise too small for the naked eye to see. The piece referenced an ongoing participatory public/private urban spaces activity accessible by emailing the artist, Jo. Q. Nelson. 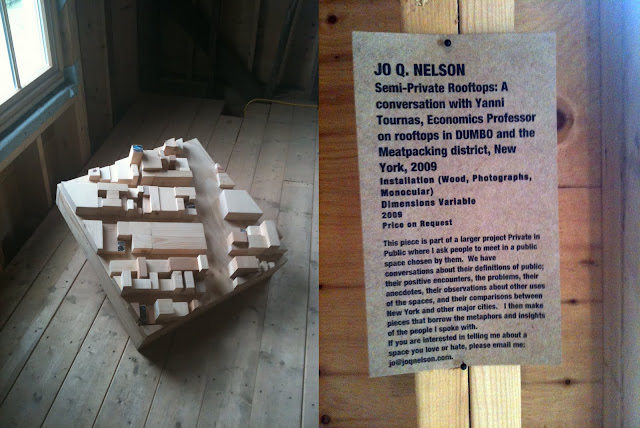 By no means was this the end of it. The exhibit wound up another section of the building with jubilant momentum. But safety first. As a volunteer at the festival, my job was to monitor the number of visitors climbing up the narrow fire stairs so that they did not exceed allowable capacity. I also had to make sure that nothing caught fire. Also acting as gatekeeper to the exhibits accessible through the back staircase, Gwen Charles's Safety Project provided orange life vests to visitors who wanted to wear them free of charge. "If you are not wearing a life jacket, it's not going to save your life," was written on the booth showcasing the vests. On departure, visitors could opt to buy these psychological failsafes for $45. Many who were wearing them commented on how comfortable and safe they actually felt with some degree of due irony. 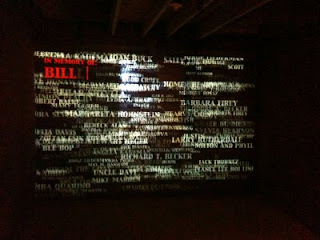 With over one hundred artists showing their work, the festival could have easily become a maelstrom, but the narrow stairs controlled the flow of people very efficiently through the vertical stacks of the industrial space. When I took a break from my volunteer job, I had a chance to glance through the 2nd and 3rd floor exhibits. I stumbled upon a dark room with a wall-width projection of names. Stephen Eakin's In Memory Of, a compilation of names of deceased individuals allowed visitors to enter the name of someone they wanted to commemorate through a user-friendly, touch-based interface. Dim lighting gave the space the somberness of a mausoleum and the visitors the privacy of remembrance. I entered my grandfather's name in the dense pattern of names and returned to my post at the base of the stairs where I had an excellent view of Brinton Jaecks's Unconscious Collective - a vortex of carved wooden beds attached to the ceiling and to each other with smoothly carved wooden chains and spanning across most of the ground floor. The piece references institutions and has a musical quality expressed through compositional tension and axial rotations of the individual beds. It is also a fine work of carpentry. 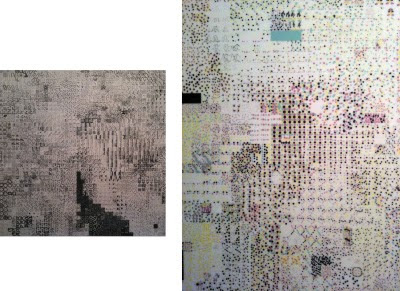 The festival accomodated both digitally produced work and manual processes. Clement Valla engaged 1600 individuals in the creation of two composite paintings on mylar through online software. Mary Lydecker created imaginary cities with traditional collage techniques, but the intersections were so seamless that the places became believable in their own right. She combined imagery from Stockholm and Hong Kong or Cocoa Beach and Stockholm, establishing a picturesque ambiguity about the sense of place. Her collages bridge geographic distances yet seem perfectly familiar at first glance because the patterns of development over the last century have produced odd stylistic and scalar juxtapositions.

Although there were other noteworthy pieces participating in innovative and polemical trends in the arts at Wassaic, for the sake of brevity, the remainder of the article focuses on the work of four artists who made a particular effort to engage their audience. 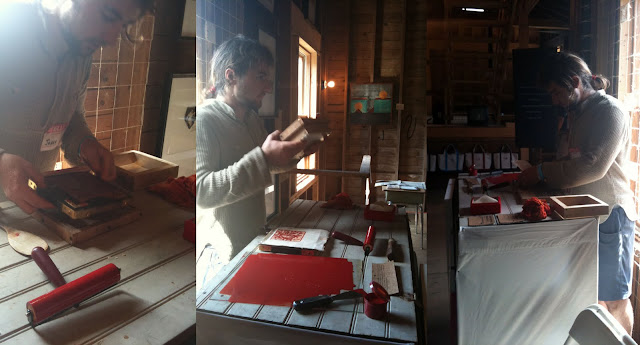 Jesse Kauppila
Printmaker Jesse Kauppila performed live demonstrations of his Bitmap Machine project for his audience. Collaborating with a mathematician, Jesse is generating combinations of "bitmap" prints, which will function as 2D, scannable barcodes. At the festival, he could be found shaking a box he had constructed to print the custom barcodes and explaining the process outloud. A ball-bearing grid underlay a metal, pixellated grid. Each time he shook the box, the ball bearings would land into random quadrants of their underlying grid and push up on the individual pixels of the grid above them. Jesse would then ink the end result and print the bitmap impression on Japanese rice paper. He was able to carry out this process without a press because the box he had built for himself performed all of the functions of a printing press. His individual prints became part of a larger twine-stretched grid, which he used to hang his pieces and keep track of the random combinations generated by the way the ball-bearings fell into place. His project aims to marry traditional print-making techniques with digital barcode technology. Throughout the duration of the exhibit, Jesse never tired of elucidating his process and answering questions.
He is based in San Francisco, where he practices printmaking and seeks collaborations with other artists.

Ben Cuevas
Installation artist and avid knitter, Ben Cuevas is inspired by British artist Damien Hirst and French social thinker Michel Foucault. When his frind taught him how to knit, Ben focused on how surgical the process seemed. His knitted hearts, skeletons, colons and scrotums among others, appear soft and plush and evoke the sense of comfort that any knitted apparel might. Structurally they are familiar because they are based on medical illustrations rather than photographic images of human anatomy. It is difficult to remember that they represent a disembodied grotesque. However, Ben insists that his work is not about representation. The installation piece he chose to showcase at Wassaic Project features a knitted skeleton seated atop a pyramid of Borden's condensed milk cans and a cloud of screen prints on Plexi glass suspended above it. The prints are of disembodied anatomical parts photographed in high resolution with diagrammatic illustrative overlays. Ben conceives of the piece as a reference to material culture and Wassaic's local history (The Borden Company had a condensed milk factory in Wassaic.) and a meditation on transcendence. The knitted skeleton is seated in the lotus position. His piece, like many of the other installation pieces in the exhibit drew the attention of the improvisational dance troupe comprised of dancers Charmaine Warren and Ashe Turner and musician John Ellis. Ben is based in Los Angeles and attended Hampshire College in Mass. 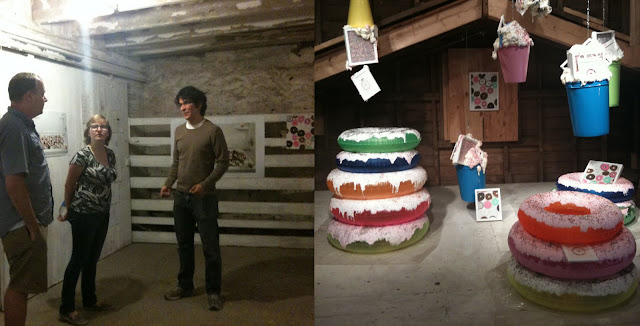 Josh Atlas
Josh Atlas wants to make you laugh. His doughnut-covered disco ball, frosting-laden beach gear and picture frames jammed in buckets with foam cushioning evoke Wayne Thiebaud's pastry paintings. Josh's work is 3D, however. It responds to lighting conditions, and both kids and adults love it. In order to prepare the doughnuts for his disco ball, Josh had to coopt another artist's studio and set up a drying abacus. To preserve the piece, he coated all his doughnuts in urethane and the frosting in epoxy. In order to provide a stable substructure for his disco ball of doughnuts, Josh used a beach ball as the core. His meticulous and finely-crafted drawings demonstrate the care and effort that went into creating his wondrous glazed amalgamations. Their precarious balance is due to a finely-tuned process.

A visit to Josh's studio affords a glance at a large photoprint of Josh submerged in a bath of doughnuts. He invites all to take a dip or watch him bask in the pleasure. One question we can all ask ourselves is whether such quantities of doughnuts express a love of them or an uncomfortable overabundance. Josh says he is just obsessed, and that this is an object-oriented turn in his work. He is also based in Los Angeles.

James Weingrod
The cosmos in a petridish comes to mind when James Weingrod starts painting with his custom-created water-soluble pigments and resins. He uses a clay-surfaced wooden base and films the process. A drop of silver fizzles and bleeds outward melting into the black, phalo blue and veridian green sea that Weingrod calls the universe. He invites participants to create the universe with him and explains doppler effects and supernovas as he reconstitutes the painting laying flat. It took him three years to master his materials and learn to control and predict their behavior. Weingrod's materials come from a small independent store called Guerra in New York City. Although he does not claim to be a chemist, Weingrod mixes all of his own paints. Dressed in a Tyvek suit and a Fedora hat, he has a knack for his participatory act and is not shy about engaging an audience and opening up his simple yet mesmerizing and infinitely engrossing process to all willing participants.

The Wassaic Project is an annual event, and it is organized by artists for artists. All the co-directors - Eve Biddle, Bowie Zunino, Elan Bogarin and Jeff Barnett-Winsby - had pieces in the exhibit and spent all year planning the well-attended, three-day event.

All photos and text by Bora Mici. Link to original article on Artists Speak: