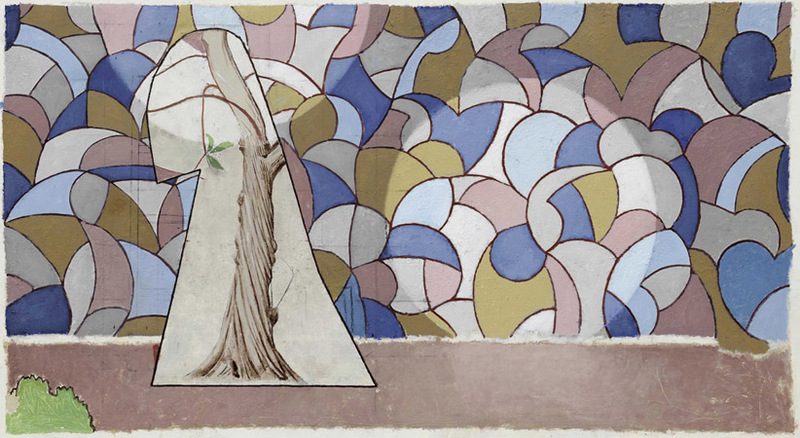 Three years ago Matthias Weischer (born in 1973) left Leipzig for a scholarship at the prestigious Villa Massimo in Rome to dedicate himself to nature drawing. In that time a collection of drawn vedutas, nature and object studies were developed, which were exposed for the first time at the Neuer Berliner Kunstverein in 2007. Back in his studio in Leipzig Weischer started painting again - first of all additive landscape illustrations and garden studies, inspired by his drawings.

Now Matthias Weischer is entering a new space, filled with his inventions, where no images of found places exist: Monte Carlo. Compared to the perspectively interlaced, collage- and interior-like sceneries of the earlier large-sized canvases, which are a delight because of their richness of details, presently the object itself comes into focus of the small-sized paintings. But according to his graphical shorthand, the objects are not captured in their totality. Donkey and horse have to get along only with their hind legs, whereby the artist put them a blue sneaker or a red high heel aside, just as if it would be useful in this situation. At this point not fixation but evocation of form has to serve the purpose.

Weischer offers an association of form to the audience, which obtains validity only in the context of self-reflection. Following the principle of additive landscape, Weischer arranges the plastic unities of animal, figure and object fragments made out of color as a pure act of painting.

The understanding of painting as something different from the reproduction of an illusion has become an artistic topos since the losing of topographic interest, for example in the landscape art of Cezanne.

The 19 canvases assembled under the title „In Monte Carlo" are not only consisting of mazy assemblies of small visual unities, which have emancipated themselves from any force of logic. In their shorthand they show the way to and through Monte Carlo, which can be a specific place, but does`nt want to. It is rather a place of fantasy in the mind of the single person arising out of his own experiences.

Posted by Abhilasha Singh on 8/2/10
RELATED ARTICLES
COMMENTS (0)
ArtSlant has shutdown. The website is currently running in a view-only mode to allow archiving of the content.