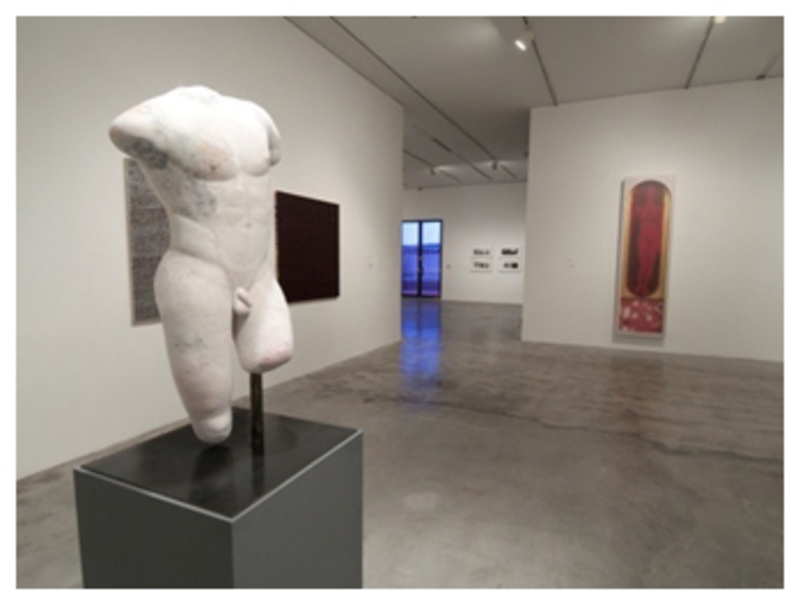 MAM Takes a Shot of Its City

Sweat, high heels, dried dead bugs, alcohol (but a shortage of cups), and a heck of a lot of people coming out to support the Miami Art Museum and some 35 local artists in New Work Miami 2010. This pretty much sums up my first opening preview party at MAM.

Curated by MAM’s Peter Boswell, assistant director for special programs/senior curator and René Morales, associate curator, New Work Miami 2010 brings together examples of work being done by Miami artists today.  In the tabloid accompanying the show, René Morales describes the show as a “snapshot” of the work being produced in Miami right now.  The works in New Work Miami 2010 were chosen during studio visits while the pieces were in various degrees of completion and contemplation.

Getting back to the dried dead bugs...  About one quarter of my way into the show, I was overcome by a strange odor.  I first noticed this while in the small room housing a provocative installation, Untitled (Sketches) by Felecia Chizuko Carlisle, which utilizes various projections bounced off of one large, centered mirror.  The artist will be coming back throughout the show to change up the installation.  On the evening of the opening, the room danced with fragmented light patterns, some bringing to mind car headlights on slippery, rainy evenings.  People like to look at themselves in mirrors…so this room was quite full during the opening.  At first I chalked the smell up to body odor from so many people in a small space.  However, as the room cleared out and I was able to enjoy Carlisle’s piece without human shadows getting in the way of the projections, I noticed that the smell hadn’t left along with the pretty people.  I realized that it was actually permeating from the work directly outside; a beautiful, intricate, coffee colored wall drawing expanding onto four walls.  Fabian Peña’s Untitled has a center image of a bridge mixed in with cursive text that wrapped around the wall and the entire piece is completely made up of fragmented cockroach and fly parts.  An impressive and surprising execution.

Another work using innovative material was from the collaborative team, Guerra de la Paz, made up of Alain Guerra and Neraldo de la Paz.  Male Torso 1 sits on a slick black museum pedestal and is brightly lit like an antiquity.  However, this statue is made up of discarded clothing and shoulder pads, a commentary on modern day ideals of attractiveness and materialistic desires.

Vickie Pierre’s quiet Elemental Mistresses painting borrows part of its forms from a child’s rubber stamp of a veil.  These shapes make up two amorphous forms that are connected with dangling, overlapping, and reverberating, string-like drips; the forms separate but still connected.

A large-scale graphite on paper drawing The Hunting Ground by Christina Pettersson resurrects Juliet from Shakespeare’s Romeo and Juliet.  Accompanied by symbols taken from the play, expertly drawn reptile companions.  As the viewer, you feel as if you are catching Juliet at the precise moment when life comes back to her eyes.

The aforementioned works are just a sampling of many that demonstrate the discipline and commitment that is apparent from this “snapshot” of Miami artists.