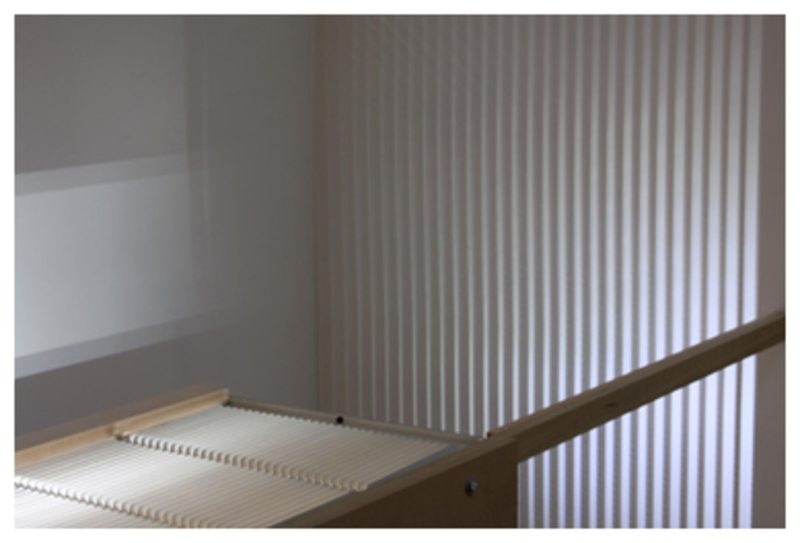 
Minimalism has always been an important sub-text for much of the work shown at Hogar Collection, and it is no surprise that the 2010 summer group show at this fine Grand Street gallery showcases work that could easily start a discussion on the genre, or perhaps the existence of  “Neo-Minimalism”.  Called Lateralisms, Hogar’s group show of  painting and sculpture is curated by Matt Wycoff, an artist who is represented by the gallery.  Featured in Lateralisms is the work of four contemporary artists who have all achieved a respectable amount of exposure without actually working during the period in which minimalism was accepted as contemporary.  In fact, taken out of context, the work in Lateralisms might not seem to be excessively influenced by the work of the 1960’s at all. However, for this show, the curator has taken the opportunity to expose the latent underpinnings of the earlier movement in these artists' work and how, criticisms aside, Minimalism continues into our age almost intact.

A good example of a contemporary minimalist approach can be observed in James Woodfill, who has created a pair of illuminated works that spill a cold white light out on to the walls and ceilings of the gallery.  In both pieces banal household objects, such as, light fixtures, an A/C chassis and wood are assembled carefully to create simple but stunning projections and patterns on the wall.  In one piece, Untitled (Fragment A), the vents in an A/C chassis are used to project an exquisite descending series of shapes that recall a corporate logo or a test pattern.  The other piece, Untitled (Fragment B), uses an open channel in the object to cast a respectable, if not quite monumental, column up the wall and into the rafters where it diffuses into a space that may or may not be considered art.  The way that James Woodfill coerces anonymous, mass produced objects, to create specific anonymous forms, does fall neatly into a discussion, or post-script, of the original intensions of the minimalist movement.  This discussion is referenced in the press release for Lateralisms as a “horizontal movement” and is perceived as a response to criticism against Minimalism and Post-Modern dominance during the intervening era since the movement’s origins.

The question that remains is whether or not this difference could be sufficient to give the work in Lateralisms the proper “Neo” designation, but this might not be important when taken in context with the fact that it has already fulfilled such requirements, regardless of it’s title.