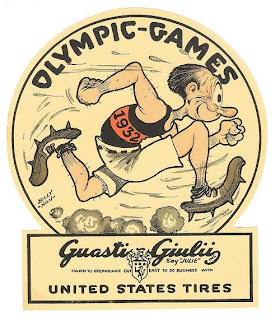 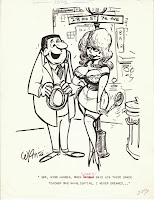 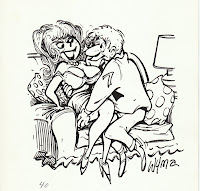 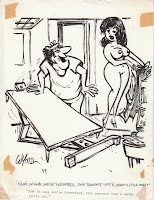 What little I know about Pete Wyma comes from scrutiny of web sources, none of them complete. Wyma is another of those artists who never quite got out of the 1950s - 1960s comic underground, though apparently he is well- known among his peers. He is just on the cusp of familiarity (which means just before the web) Let's call information on the sketcher sketchy.


Here are some bits and pieces of Peter Edward Wyma.


Wyma was born in Chicago in 1922. He attended the Billy Hon School of Cartooning, also known as the Western School of Cartooning. While the institution no longer exists, it was at one time the most famous cartoon classroom around. Billy Hon, by all accounts, was a hard drinking and drawing guy who at one time lived with Bud Fisher, creator of Mutt and Jeff. He ran ads for his school in several newspapers and magazines during the 1940s. (Billy Hon was a pseudonym for Wilfred Honigsberg) Billy also published "Billy Hon's Famous Cartoon Book: A complete course in Cartooning" in 1927. Obviously, Hon and his school would seem to be a natural article for someone out in Los Angeles to research. Get to it Angelos.


Roy Delgado, a prominent cartoonist attended the school and provides some information, as well as showing a nice flyer for the school. Roy also shows an early work from 1953 by Wyma published in the Saturday Evening Post and claims "Peter Wyma probably influenced more cartoonists than anyone at that time." I've found several more ads for the defunct school and one of Billy's own drawings from a tire ad with an Olympian theme.


I am not sure what years Wyma attended, but by 1954 he was working on a comic strip with Helen Glynn in the Detroit Times, and the January 18, 1954 issue of Life Magazine has an ad he drew for Sanforized Cotton. His later work in the 1960s included stories for Monster Howls including Hannibal the Horrible Cannibal, and some covers for the digest Army Laughs. In 1966 a compilation book "I'm a Nut for Wyma" was published by SRI and a book entitled "More Race Riots: An anthology of Ethnic Insults" by Kanrom Books in 1973. (Maybe that ad for the Billy Hon School was useful here, though the books contains jabs at the Irish, Polish, Puerto Rican, Scots Jews and Gays as well!) Wyma had work published (and did the cover) for Broadway Laughs in December 1964.


Later work, of which the examples here are typical, was published in Sex to Sexty. Pretty funny work, but then I get the idea he was no Billy Hon.