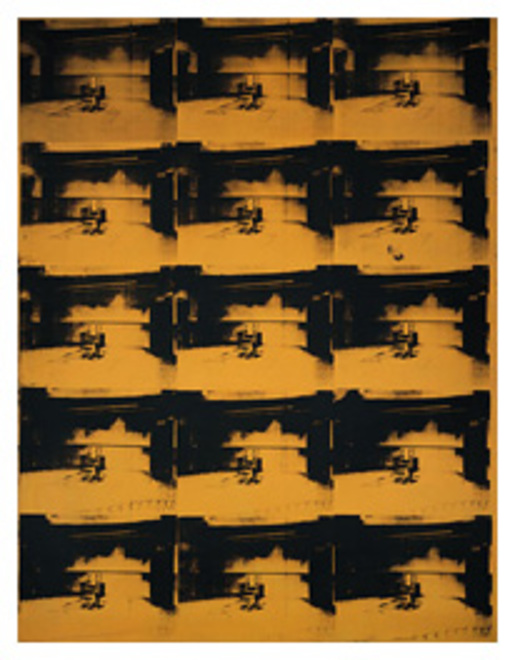 It's Summer! Who You Gonna Call?

Summer is known for its mass weekend exodus of metropolitan art viewers and influx of New York CityPass-toting tourists. Galleries and museums tend to drag out everything but the kitchen sink from June to August, dusting off works from basement vaults and permanent collections and mounting crowd-pleasing group shows more eclectic than those from the regular season. The result can be refreshing, haphazard, banal, idiosyncratic or cutting edge.

Haunted, Contemporary Photography/Video/Performance is a quintessential summer show. At first glance it looks like a mishmash of photography and video-based art from the modernist 60s to contemporary, lumped together under the auspice of being haunted. The premise being that art refers to the past and that photography and video have the unique ability to conjure up lost moments like ghosts. With an impressive list of artists from Tacita Dean, Christian Boltanski, Sophie Calle, Bernd and Hilla Becher and Felix Gonzalez-Torres, to Roni Horn, Zoe Leonard, Robert Rauschenberg, Cindy Sherman, Richard Prince and Andy Warhol, the show presents juxtapositions of modernist, postmodern and recent works side by side. The Barthian notion of photography reshaping the past is intriguing but hardly new.

Jennifer Blessing and Nat Trotman explain their curatorial strategy: “Much of contemporary photography and video seems haunted by the past, by ghostly apparitions that are reanimated in reproductive media, as well as in live performance and the virtual world. By using dated, passé, or quasi-extinct stylistic devices, subject matter, and technologies, this art embodies a melancholic longing for an otherwise irrecuperable past.”

The show explores ways in which photography asserted itself during the second half of the 20th century parallel with the rise of mass media culture and traces the development of postmodern techniques such as appropriation, restaging and recycling and their impact today. The resulting exhibition feels well-intentioned but uneven. Berndt and Hilla Becher’s water towers fail to engage in meaningful dialogue with Sally Mann’s blurred tea-stained landscapes and Sophie Calle’s parents minimalist graves have little in common with Nate Lowman’s Disney-esque tombstone. Within this visual cacophony, Raushenberg mixed-media combines dance off the walls, cruelly contrasting with Tacita Dean’s 16mm film (Stillness, 2007) in which Merce Cunningham serenely confronts death in utter stillness after a lifetime of movement. The better-known artworks tend to drown out the contemporary pieces, like maestros playing at disparate volumes.

On the 21st century level, the show works best when addressing the idea of art revisiting past traumas. Anri Sala’s moving narrative video, Nocturnes, 1999 of a recuperating war veteran struggling to reintegrate himself into civilian life by maintaining tanks of fish and acting out violent tendencies in Playstation is one of the more memorable works in the show, along with Janaina Tschape’s doll-like spinning in a German palace that once overlooked the concentration camp of Buchenwald. An My Le’s Small Wars, 1999-2002 a series of black and white photographs of Vietnam war reenactors in Virginia is both personal and engaging while Paul Chan’s laser projection 6th Light, 2007 simulates falling arsenal while recalling Plato’s shadows.

Some works from previous decades wear better than others. Photo collages and installations by Annette Messager and Christian Boltanski are still beautiful but look too recent to be historical and too dated to be contemporary, while Orange Disaster #5, 1963 by Andy Warhol, a repeating grid of electric chairs, feels as edgy as anything in the show. Sherry Levine’s appropriated Rodchenkos look passé.

Although Haunted is far from perfect, its interweaving of past and present raises questions about the future of art-making in an era of post-postmodernism where no clearly defined movement has rushed in to fill the void. As artists recycle the recycled, appropriate the appropriated and mirror mirrors, one can not help but ask where photography, performance and video art are headed.  Although Ms. Tschapes’s exhaustive spinning might suggest that art has reached a dead end, the incisive political commentary and shared personal experience of artists such as An My Le and Anri Sala point the way out.