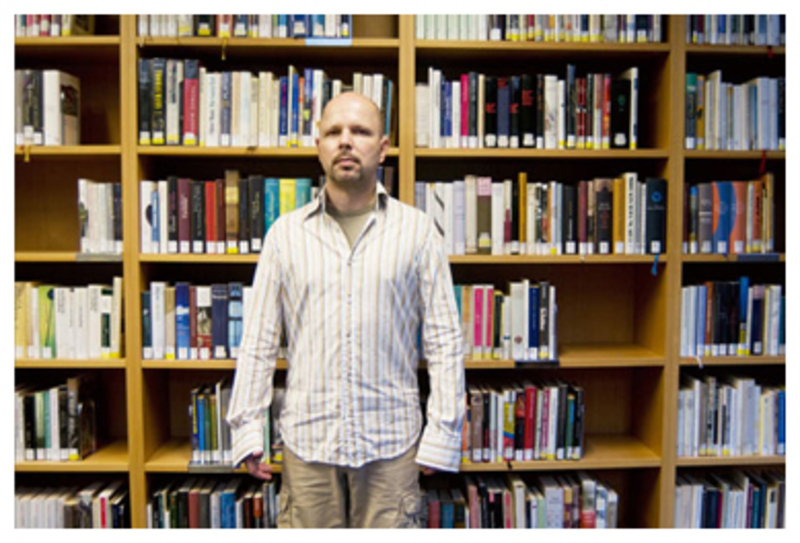 Elisabeth Smolarz’s Farewell East Germany is a straightforward three-channel video that explores the remnants of collective memory in individuals raised in communist Eastern Germany (GDR). A former resident of the Eastern Bloc, Smolarz was born in Communist Poland and emigrated to Germany in 1989, following the fall of the Berlin wall. The video assumes an added meaning when viewed within this personal context—it is not only historically informative, but also embodies the artist’s quest to piece together fragments of her own identity.

The most poignant of the three channels is the frame showcasing Uwe B., a man in his early forties, who explains how the connection to Russian culture was instilled in him during his childhood in the GDR.  In order to strengthen the Eastern Bloc’s affinity to Russia, kids were taught Russian in school, and required to recite songs in the foreign language. Uwe B. demonstrates how entrenched this habit had become with his ability to sing Russian battle songs, poems, and children tunes to the camera more than twenty years later. Although he recalls most of the lyrics and is able to explain the meaning of the songs—his delivery is automated. This documentation is valuable to the understanding of how collective identity is influenced, formed and sustained for ages.

The next frame introduces Peter S., also a man in his early forties, who is standing in a firearms shop with an AK-47 laid atop the counter in front of him.  The video’s caption explains how as part of his mandatory military service in the GDR, he was trained to dismantle and reassemble this firearm in a pitch-black room.  Smolarz requested he perform this task again, twenty-two years later, wearing a blindfold. While he breezes through the task of disassembling the rifle, he visibly struggles when attempting to reconstruct it, before finally admitting failure and removing the blindfold.  As with Uwe B., Peter S.’s actions reveal how elements of his past are embedded in his psyche, though are beginning to erode with the passage of time.

Nestled between these two screens, the third frame provides a silent, slow-motion tour of a room in the former New York residence of West Germany’s Ambassador to the United States. It has been said that the GDR’s fate was determined in this room in 1989, during a meeting between West Germany’s Foreign Minister/Vice Chancellor and the Soviet Union’s Foreign Minister.  The inclusion of this documentation punctuates the irony embodied in Peter S. and Uwe B.’s composite identities. Through their actions we recognize the strong influence the Communist rule had on the formation of their identity. Yet at the decisive meeting – where the components of their self were officially severed – they did not even have a representative. In providing an intimate perspective of these personalities, Smolarz simply, but poignantly comments on shifting identities in light of historical turmoil.