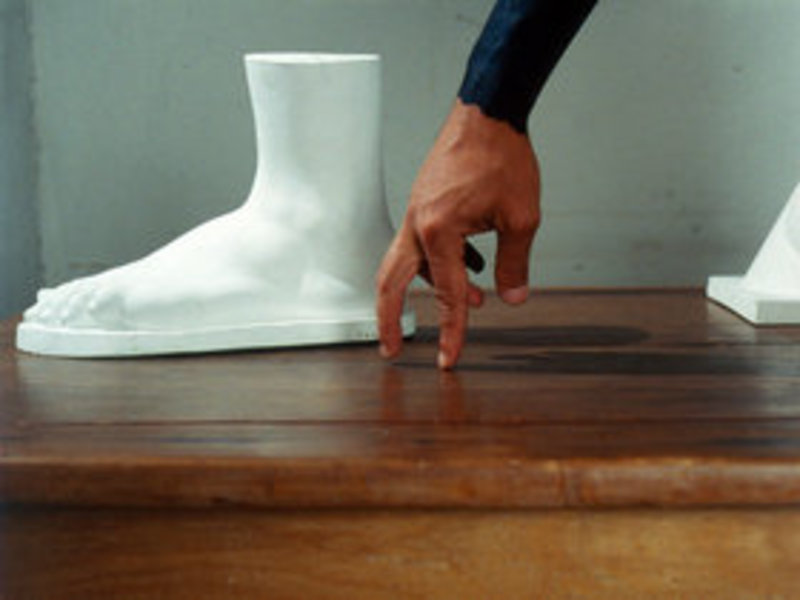 We met a man in Brazil who was called Tarciso, a former prospector of imperial topaz who 20 years ago found the largest precious stone ever discovered in the state of Minas Gerais. At that time he was happy: he fell in love with a native Indian woman, “a fire woman” who he made love to and lived with for several years. She later ran away and life became stale, Tarciso turned to alcohol and now spends his life drinking cachaça (rum) and endlessly repeating the story of Brazil’s largest topaz, the incredible rock that he once exchanged for a pile of money; and of how he blew all of this money on cars, houses, cachaça and girls.

We asked Tarciso to explain to us what the similarity was between a topaz and a woman. “That's a daft question: they're both precious stones.” There was nothing in Tarciso’s life that wasn't expressed in terms of topazes: a Brazilian stone that varies in transparency and purity and is preferably more red than yellow. For Tarciso, something only had value if it was a stone, or if it was an analogy for those almost invisible properties that only a true gem connoisseur knows how to appreciate. “A giant topaz. From my hand to my elbow, as big as an arm! So pure it was the same colour as this cachaça here.”

“That's what it's like to be a miner. You can't keep money: if you sell a stone, you have to spend it all in within the week, or you’ll never find another! That’s why prospectors are poor. Because they spend! They have to. What’s money for?” And he explained to us that the philosophy of prospecting was a lottery. Sometimes he would wake up in the morning and find the stone that he had dreamed of the night before, but usually he wouldn’t find anything. Was it a matter of luck? Yes, that’s why Tarciso didn’t want to have anything to do with money, “Having lots of money drives your luck away”. During the conversation, we began to realise that all of Tarciso’s dreams were topazes and that while he slept, he saw himself crossing sparkling geometric fields where everything was transformed into precious stones. Tarciso was thin. They told us that people who drink rum have no appetite, they don’t like to eat, perhaps in his dreams he eats perfect crystalline polyhedra.

“In the dark,” he said, “even in the dark you can tell whether a crystal is a topaz; it has to have four sides.” He closed his eyes and put his hand in his pocket. He then explained what kind of a man he had once been, of how he had led a disciplined life, starting work first thing in the morning and how he had thrown away those stones that the prospectors collect today. “The stones they find now are like the ones I used to give to the kids to sell to tourists.” If we had asked Tarciso if he thought the other prospectors were looking for topazes in the right place, he would have said no: “This mountain is just earth and mud, it doesn't have any more stones in it!” He had already looked there and found the best gems. “All that's left there now is rubbish.”

He also told us that the topaz in the Ouro Preto Museum, an impressive stone that we later saw in the university mineral collection, was glued together in the middle and that nobody knew. Already very drunk at this point, he laughed and said: “It's a beautiful topaz, but broken, in the shape of an orange pen. As clear as can be. If you look into it, it looks like this cachaça here.” He was the one who had sold it.

Mining Meaning Colette Campbell-Jones
6/18/11
COMMENTS (0)
ArtSlant has shutdown. The website is currently running in a view-only mode to allow archiving of the content.