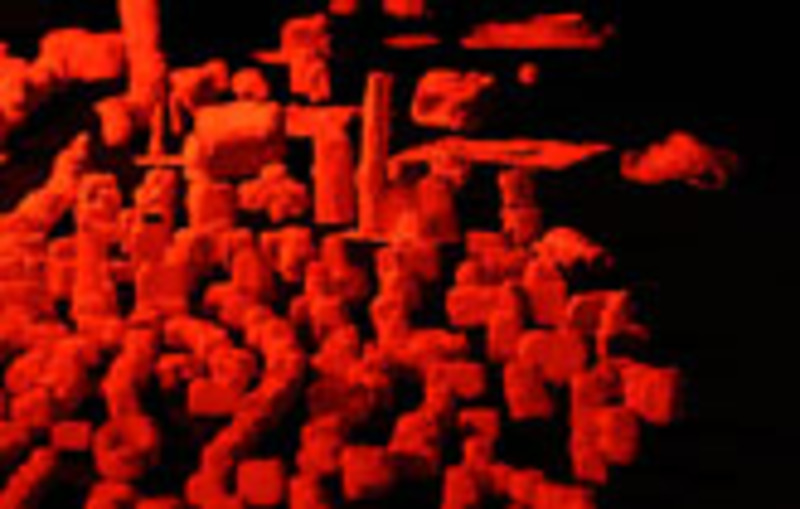 The modus operandi of Ludlow 38, the downtown satellite for contemporary art of the Goethe-Institut New York, is to organize shows in collaboration with other European art institutions, largely in the Kunsthalle tradition.  Committed to non-commercial art, they often present lesser-known European artists in their cozy and compact Lower East Side space.

For their latest show, in typical Ludlow 38 fashion, Abstract Derive presents a visually spare group show whose works are grounded in a kind of research-based approach. Curated by Alexl Weider and Tobi Maier, the show is informed by an earlier commission of Cristóbal Lehyt at Künstlerhaus Stuttgart in 2008.  Part of that work, which is re-presented here in this show, is a large-scale model of the city of Stuttgart made out of plaster, paper, and plastic that is installed in a darkened room with dramatic red lighting. The other works in Abstract Derive approach their specific socio-political investigations through abstraction, drawing on questions of historicity and the tense relationship between form, representation, and history.

For example, the two video works in the show both use a slow, static approach to their subjects, presenting images with steady voiceovers that narrate and raise questions about the very history they are presenting. Judith Raum’s machine subjectivity (2010) shows various types of wooden handlooms in Germany and Turkey, while Mariana Castillo Deball’s Entropology (2008), depicts images from CERN (European Organization of Nuclear Research) in Geneva, which range from minerologists in the lab to collections of stones. Both videos are a kind of simple presentation of information, but through the specificity of the histories that each explore, they become formal tools for denaturalizing the social, a critique both of the history and of its effects.

Another grounding work in the show is Kasper Akhøj’s Abstracta, an ongoing, 4-year long project that began as a journey on the “Autoput  Bratstvo i jedinstvo” (Brotherhood and Unity Highway in Serbo-Croatian), the only modern roadway in the country built in the 1940s and 50s to connect the four constituent states.  For his installation at Ludlow, Akhøj presents a version of the Abstracta display system designed by Danish architect Poul Cadovius and found all throughout his journey – a shelving unit that over time become a globally ubiquitous, easily adjustable and portable structure for the presentation of goods for sale. Comprised of a modular sculpture made of steel and glass, Akhøj’s minimalist presentation of the ostensibly utilitarian unit is a graceful handling of the materials, one that quietly gestures towards open questions about trade and culture.

The artists in Abstract Derive are definitively invested in questions around history. Their approaches combined here amount to a proposal in a politics of abstraction, a politics that take form as central to critique.

Posted by Hong-An Truong on 6/11/10
RELATED ARTICLES
COMMENTS (0)
ArtSlant has shutdown. The website is currently running in a view-only mode to allow archiving of the content.