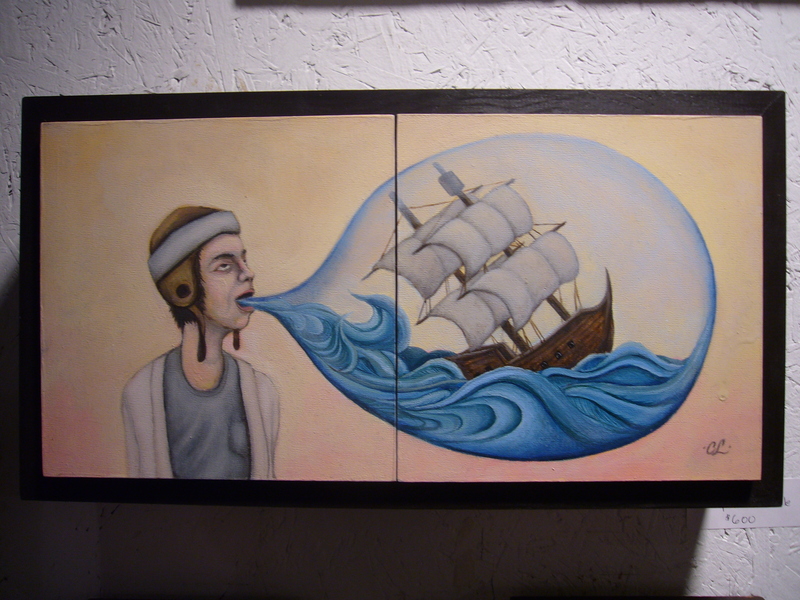 On the Edge at Fountain

The DIY spirit of Fountain art fair is apparent from the first step onto the rusty pier and into the pieced-together interior of the swaying ship. Everything is makeshift, the contours of the architecture dictating placement of the booths.

Our first stop, naturally, was the ArtSlant booth where we displayed the winners of our 2009 Juried Showcase: Julie Davidow, Michael Zeheloski, Adam Jahnke and Yo Fukui. Davidow's biomorphic painting extended from her canvas to envelop the entire wall; Zeheloski's 3-D objects rendered 2-D perplexed with their exquisite and literal exactness; Jahnke's photographs of industrial agriculture portrayed a world we wish was too weird to be true; and Yo Fukui's felt and wood sculpture was a colorful jolt that begged to be touched. The placement of works, curated by ArtSlant's own Trong Gia Nguyen, was in contrast to many of the other booths, who seemed to be suffering from a case of horror vacui. Along with the rather chaotic mishmash of various pop culture referents and grotesque subject matter portrayed in much of the work, and the occasional sway and dip of the craft with its associated creaks and groans as other boats passed down the Hudson, one could almost feel somewhat seasick. We were positively inundated by images; the entire experience seemed to speak to the overwrought, media-saturated condition of contemporary life.

One artist, however, not only exemplified the chaotically cluttered, distorted aesthetic but amplified it to the degree that the overwhelm itself became the subject matter. The 200+ artworks by Greg Haberny became a whole installation, clustered from floor to ceiling surrounding an ominous bound baby doll atop a funeral pyre. The works themselves dealt with pop culture, advertising and authenticity in a wry, tongue-in-cheek, verging on anxious manner, and the artist's intense glare as he handed out price lists and surveyed us surveying his work lent the installation a sense of urgency, as if at any moment he could light the entire thing on fire.

(We Are Familia, Keepsake Box No. 8/25, "Bricolage." Designed by Fabian Bedolla and Jennifer Garcia, containing 36 diverse works of art including a diorama and doll by Kim Songhe.)

On the other hand, We Are Familia, a collective of about fifty artists, designers, filmmakers and architects, tuck their artworks neatly into compartments which fit right into their superbly fashioned, one-of-a-kind Keepsake Boxes. Created out of unique pieces of vintage furniture, the boxes are cool in themselves, but when opened contain treasures varying from artists' prints, videos, drawings, collages, photographs, ceramics, totaling to about thirty-five to forty unique pieces of art from the Familia per box.