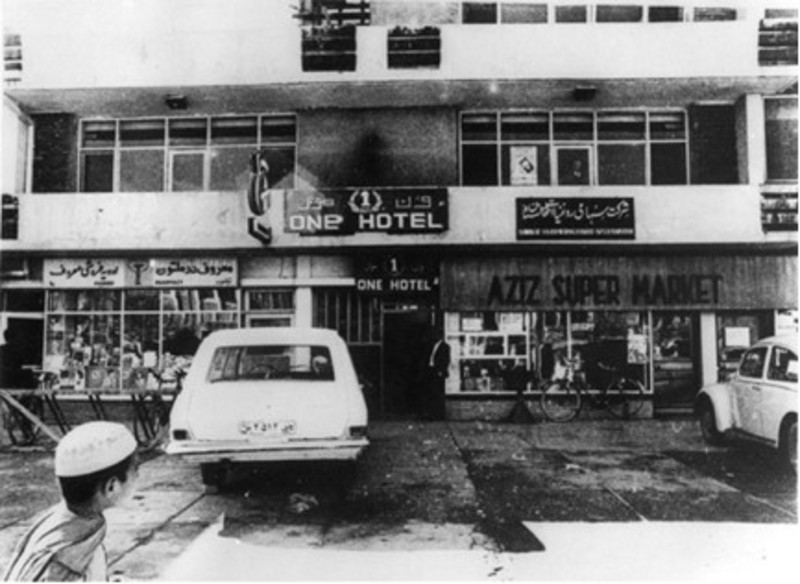 Garcia Torres at the Reina Sofia

Faxes always bear the marks of transit. Though only data transferred through phonelines, faxes always come out looking like banged up suitcases, damaged from distant travel. With the ink-faded printout of a fax machine, over twenty letters on display at the Reina Sofia document a kind of a journey. These letters, ostensibly by artist Mario Garcia Torres, lay tilted in a long vitrine, bearing the marks of their journey via fax, looking altogether real, and all the more serious, given their home in a museum.

The twenty-two or so letters all come, if you’re not reading too closely, from Afghanistan after 9/11 and around the time of the American occupation. These brief missives come from the exhibition artist, Mario Garcia Torres, to another older artist, the deceased Italian Aligherio e Boetti. The letters pertain to a trip that Garcia Torres embarked on in search of the famed One Hotel, the legendary residence of the legendary Boetti in the time he was living in and out of Kabul, Afghanistan. Nothing really solid is known about the hotel, pictures exist, so do accounts, but it definitely has more legend than fact mixed up in it’s story.

Like the novelist Paul Auster (whose work has been a subject of previous work by Garcia Torres) has in his novels a character named “Paul Auster,” I would like to posit that Mario Garcia Torres has a character named “Mario Garcia Torres” who's the primary actor/agent/provocateur in the real artist's work. The letters and their meanings are all crafted by the unhyphenatedly actual author, but the whole construct is one of a fictional wild goose chase, like the endless quest for Dean Moriarty’s daddy in On the Road, Sebald’s search for elusive human truth in the scattered pictures of his fiction, or in visual art, Beuys thoughtful build-up of his own dubious legend of the artist “Joseph Beuys.” But one can’t be always putting quotations around everything, quote marks always look like the earrings of pretension, so we let fact and fiction, legend and truth all mix together. The past is always filtered through the vagaries of the present, making for what might really be a true definition for the word history.

Mario Garcia Torres never went to Afghanistan to look for Boetti’s One Hotel. The video on display in the beautiful (though difficult to get to) bricked basement space at the Reina Sofia outlines the legends and myths of the Italian’s hotel in a deadpan voice, but one never knows if these facts too are fugitive. A part of the legend, the fuzzy grasp we have on history forces legend to loom larger than truth. Napoleon may not have been the best military tactician of modern Europe, there may have been better, less aggressive generals. It doesn’t matter, the legend shadows everything else.

The letters themselves are subtle allusions to Boetti’s practice. Jean-Christophe Amman outlines a project in the January 1990 issue of Parkett:

Boetti started using the post office and postage stamps in 1969. His most ambitious work consists of 20 letters sent to 20 friends and acquaintances (including deceased artists), whom he dispatched on a fictitious journey through northern Italy. The letters contained precise data regarding the seven to twelve stages of each person’s journey, individually planned according to a specially devised system. The first traveler, Giulio Paolini, was sent off on September 25, 1969. Since address and addressee did not match, the letters were returned undelivered with stamps, marks or notations that varied from place to place. Boetti put the returned letters in a new envelope and sent them to he next address. To keep track of the entire process, he photocopied all the returned envelopes. The final record of the journey took the form of a thick envelope containing all the other envelopes, a book of the photocopied envelopes, and the route of the journey as defined in each of the first letters.

Garcia Torres’ letters to Boetti renew the legend of "Boetti" using the Italian artist's practice to create a new legend, that of Garcia Torres in fictional search for the actuality of the mythology. As fact and fiction easily blend together, fiction becomes as real as its opposite. The expanded field of art has grown to include most everything, and here Garcia Torres deftly uses history as his medium. Rarely has an artist sought and found poetry in the cracks of history, specifically art history, more palpably and more craftily than has Garcia Torres. He uses Boetti’s legend like a yarn to spin an imaginary tapestry of the search, ever-elusive, for meaning.

Posted by Andrew Berardini on 2/22/10
RELATED ARTICLES
COMMENTS (0)
ArtSlant has shutdown. The website is currently running in a view-only mode to allow archiving of the content.