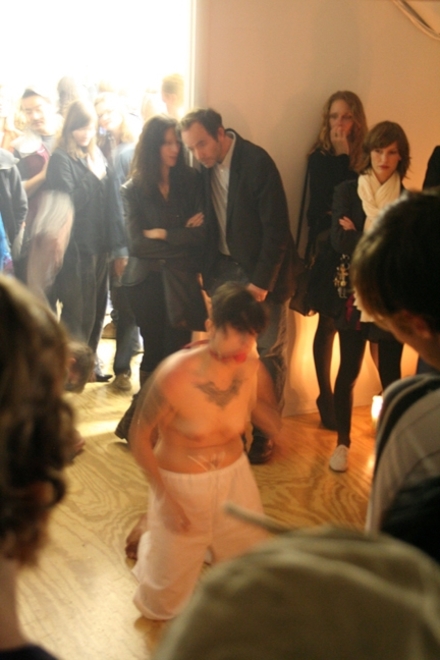 A Search for Healing in Twenty Ten

Most of us have at some point stumbled upon a variation of self-help literature, whether of the more traditional, Letting Go of Anger/Don’t’ Sweat the Small Stuff variety, or, god help us, the 48 Laws of Power and its ilk.  Many moons ago, a guy who was helping me work on a project handed me a tape:  “Listen to this,” he said.  “I think you’ll find it helpful.”  One side was called “What I Believe,” and the other side addressed the dangers of overusing the word “should,” followed by a lullaby-ish, meditative mantra.  The maternal voice narrating the tape was also its author:  Louise Hay, the self-help pioneer and publisher who became a phenomenon in the mid- to late ‘80s, publishing her own work alongside fellow gurus Deepak Chopra and Wayne Dyer, among others.  As ripe for derision as self-help will perennially remain, whether thanks to the intentional satire of Al Franken’s Stuart Smalley, or parody-friendly The Secret, Hay’s work seems to have flown under the satiric radar (despite Oprah’s endorsement) all these years.  Put reductively, it’s a philosophy of self-fulfilling prophecies, that what you think becomes your reality.  As with most practices, it has its holes, and as with all practices, it takes work, the kind of work that gets done with the frequency of the high holidays.

But when I saw that Emma Gray was curating a show entitled “You Can Heal Your Life!,” based on Hay’s landmark book (the ‘!’ being the only revision),  at Circus Gallery, I was both intrigued and excited about the timing. It seemed a full-fledged call to put in a cannon and shoot, colon cleanse, or otherwise expel and detoxify 2009 from our systems.  Indeed, Gray’s stepmother, Althea Gray, who is a healer, “dowsed” the space before the show’s opening, clearing (‘dowsing’?) Gray and Circus’ John Knuth while she was at it.  “Why not?” Gray figured.  “It was in the spirit of the show...and there was a genuine feeling of clearing the energy for a better year ahead.”  Who wouldn’t have lined up for that?

Gray makes clear that the show’s aim is not about tackling You Can Heal Your Life head on: “It's a bit cheeky, and I wanted to deliberately leave it open,” she said.  For her the idea was to include artists who use or address religion and/or spiritual iconography in some aspect.  “The title infers healing,” she said.  “Is art healing?  Is religion healing? Do we need healing after that terrible year(?)!”  The genesis of the show was her recognition of a trend in which a number of artists are “dealing with spirituality or new age stuff in a very sincere or open-handed way,” she told me, citing recent local shows of Rashid Johnson and Matthew Ronay – work that has mystical/cult and pagan/mystic vibes, respectively -  along with a number of the artists included in the Younger Than Jesus show from last spring at the New Museum.

While religion and spirituality (etc.) have always filled the landscape of art’s history, the extent to which the art is about such practices, versus of them, is what changes.   Or, perhaps an intriguing circumstance is when the art is both about and of a transcendent experience, which these days is the provenance of performance more than other forms.

At the opening for You Can Heal Your Life!, Dawn Kasper enacted the first of two slated performances:  by candlelight, and with a collection of ritualistic accoutrements and accompanying Alan Watts recordings playing from a collection of mini-digital recorders (though in the context, you’d swear they were from benedictions), Kasper flogged herself with a beaded cat o’ nine tails for roughly 40 minutes.  Her torso was bare, so one could see the resulting wounds, and she wore a ball gag, a reflection of more contemporary and secular rituals.   She created the piece based on the show’s title, and was aiming for transcendence, if a psychological one.   “I’m coming at this with specific emotions I hope to convey,” she told me the day prior to the piece.  “I hope to trigger the cognitive …to invoke a connection to healing and religion.”  Her intention, in other words, was that the remnants of the performance would stir up something, perhaps dormant, in its viewers as it gradually sunk in.  The perils of conducting such an exorcism, if you will, in the midst of a gallery opening that isn’t focused on said performance, do, as you might imagine, exist (conversations in the main space don’t fade just because there’s a flagellation going on in the other room).  The follow-up to this piece, an absolution, is to happen this Sunday (the 31st).  As great as it would have been to have been absolved first, I guess you have to clean house before you can let anybody in.  “The Healing” will include the Worship in Truth Mass Choir, and will take place in the midst of Circus’ closing party.  That the gallery will be getting such a send-off seems so 2010 (still reeling, but hopeful).

It’s a shame that Sister Mary Corita didn’t hook up with Louise Hay as they crossed paths: she would have been an unbelievably fitting illustrator for her books (as it is, they’re sweet if of the hearts/rainbows/fairy-dust variety).  You Can Heal Your Life was first published in 1984, while Corita Kent passed in ’86.  Her work, which bridges religion, 60s-activism and a healing-through-art sensibility, makes her the default poster girl for the show.  In addition to the Corita Art Center (which is right under Angelenos’ noses, in Hollywood), her legacy has been and is being carried on throughout the art world:   Mike Kelley name-dropped her in his performance, Plato’s Cave, Rothko’s Chapel, Lincoln’s Profile and also made felt banners mining her aesthetic; she was shown at the Hammer in 2000; and last year she showed, and is now represented by Zach Feuer, so further canonization, as it were, and a wider and more international audience, appears likely.   Her work – there are three serigraphs in the show – holds up impressively well, especially graphically, conjuring social activism mixed with a self-help vibe that Hay would probably be down with.  In many ways, though, the work here, modest in size, is overshadowed by Sister Corita, the myth and legend, herself; but her inclusion sets up a continuum for quasi-religious/quasi-spiritual work, as well as gets many of us who are un- or under-familiar with her work motivated to do a little digging.

A hallmark of Corita Kent’s practice was its sincerity, which is still a tricky business when it comes to associating with a practice or cause.  As with fluctuations in literature - towards irony and then the subsequent backlashes (or vice versa) - so might there be something similar in art.  Josh Podoll makes paintings deeply rooted in meditation practice- both his making them and viewers viewing them are intended to be meditative acts.  “I sort of enter a meditative state when I start working in the studio,” he told me.  “It doesn’t happen right away, it just happens through the repetition of certain activities,” (putting on the gesso, etc.).   By repeating these series’ of simple acts, he says “I feel my normal functioning, day-to-day mind sort of slips off to some corner, and I’m able to paint from somewhere else.  I hope that people experience the paintings from that place also.”  Along with a piece he made specifically for You Can Heal Your Life!, he has new work in a concurrent solo at Christopher Grimes.  For Podoll, the show offers a willingness to be sincere that people still want to see, even if they’re still interested in irony.  He talks about an openness that’s not without criticality:  “I think people would like to be open…but that we [artists] come at it in a more informed way…we’re still critical; thinking is still active.  We’d like to find something we can believe in…but that passes our critical judgment as well…whether the practice is even just looking, as a practice.”

Podoll’s paintings, which contain disparate, interweaving stylistic passages analogous to passing, meditative thoughts, aren’t easy.  They’re not of the Matisse-ian, settling into an armchair variety; it’s a more active looking that, appropriately, actually requires concentration and focus to give them due diligence.  Just as with self-help or any other practices, meditation doesn’t come easy.  One might argue that meditation is the oldest form of self-help out there- in any case, it seems to have become artists’ ritual of choice; a ritual that most of us should be setting aside time to engage in.  And, fortunately enough, if you’re in need of a little boost, the Hammer has begun hosting weekly 30 minute “drop-in” guided mindfulness sessions in the Billy Wilder Theater.  Call it passive-un-aggressive divine intervention.