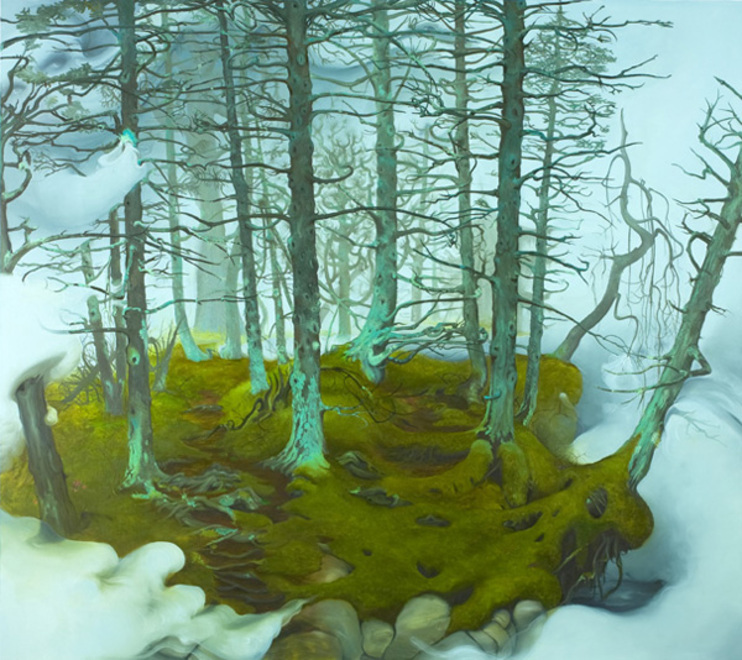 There’s a seed in each of Inka Essenhigh’s paintings from which compositions develop and grow. Often your eyes will alight on a color or a diagonal line and follow it out to the details. From there, subject matter takes over — seasonal landscapes containing spectacular, unnatural elements.

In Minor Sea Gods of Maine, the shore is inhabited by a couple of craggy creatures while the sea and sky consumes a whole different sort of being. The everyday experience of walking along the shores of Maine is turned into something like a passage from an epic greek poem. Though these are dreamlike pictures, the artist wants us to experience the substance of real life in a new way. As she stated in an interview in 2006, “I want my art to prod people into reflecting on the pleasure of moving, feeling, breathing and being alive, right now.”

The press release from the exhibition at 303 Gallery makes a connection between Essenhigh and 18th century artist and poet William Blake, quoting: “Imagination is the real and eternal world of which this vegetable universe is but a faint shadow.” These two contradictory statements are realized in Essenhigh’s paintings.

The connection to Blake continues a few blocks away with an exhibition of work by Patti Smith. There you can visit a life mask of William Blake that Smith has written directly onto. She has physically written on a lot of different things in this show, the best of which are photo emulsions created in collaboration with photographer Steven Sebring. The exhibition is called Objects of Life and reflects the artists impulsive attitude toward objects while maintaining the timeless connection to human experience. Here she is reading from her new book Just Kids: http://www.youtube.com/watch?v=Ynfs...

Posted by Nathan Sensel on 1/26/10
RELATED ARTICLES
COMMENTS (0)
ArtSlant has shutdown. The website is currently running in a view-only mode to allow archiving of the content.