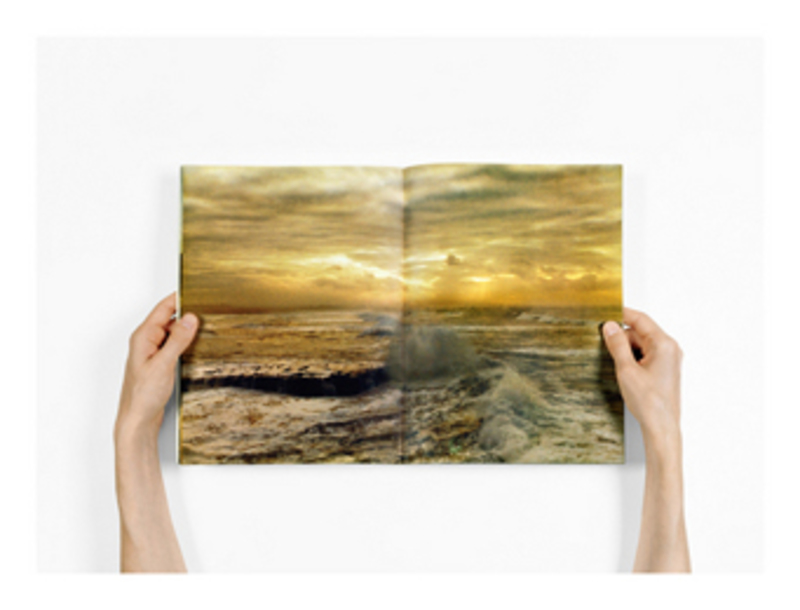 Anne Collier’s first full-scale solo show in New York is clear and concise, engaging with issues of identity and representation that seem somehow new and inspired in her deft hands. The exhibition consists of ten recent photographic works, which are displayed together in one open gallery, and a slide-projection installation, which occupies a second.  Collier gets right to the point: a C-Print entitled Developing Tray #2, which hangs at the entrance to the first room, brings immediately into focus the tension between object and voyeur, private and public, that she explores throughout the rest of the show.  The eponymous developing tray is photographed from above against a black ground, and contains a “developing” close-up of one wide-open eye, in sharp focus, which stares boldly, directly out.  Eye contact is impossible to avoid; a viewer is made immediately self-conscious of his role as such, and finds himself cast suddenly into the role not only of a viewer but a voyeur, caught in the act.  The work’s forced acknowledgement of this mirrored dynamic—“I-see-you-seeing-me-seeing-you” ad infinitum—mobilizes an awareness of Collier’s engagement with the mechanics of the gaze.

The next work on the wall, Open Book #2 (Crépuscules), reifies this discourse’s presence here.  In it, we are given access to someone else’s solitary act of reading: the image before us seems to have been captured from over a set of shoulders.  The two disembodied hands that brandish this spread, which depicts some roiled sea at sunset, tossing waves and a cadmium yellow sky (perhaps the symbolic content of a private inner landscape?), belong to a person who doesn’t seem aware of our intrusion into his space; the contents of his reading material remain eternally available to us.  The title is compelling—does “open book” refer solely to the bound set of papers pictured?  Once again, Collier forces us to consider the dynamics of identity and the role of representation and perception in its construction.

Images of found objects—the once-personal, appropriated and reconfigured as public—abound: twin copies of the magazine Uomo, its cover graced, fittingly, by artist Cindy Sherman; a box of jumbled puzzle pieces whose successful assembly would result in a Jackson Pollock (and who would be the author of the work, then?); the pages of a self-diagnostic personality test which indicate that the constituent elements of an individual are checkable bullet-points (would the perusal of a completed copy mean knowing the person contained within?); and another twin image—this time of the publication Zoom—which hits the message home: it pictures a naked woman sitting provocatively on a white couch, an enlarged camera in the place of her head and aimed at us.

The slide-projection piece in the back room, entitled Woman with a Camera (35 mm), takes the conflation of a woman viewed with a viewing apparatus and problematizes it further.  In Woman, Collier has sequentially projected 18 still frames from the 1978 film Eyes of Laura Mars onto the wall; they play, slowly, and then repeat.  She has chosen a moment from the film in which Laura Mars, a fashion photographer played by Faye Dunaway, has a graphic premonition of a murder while taking a photograph; Collier’s 18 frames take place within the few seconds that Mars, one eye pressed to her camera and the other shut, suddenly pulls back from the device and opens both eyes wide.  By isolating these particular eighteen frames, Collier deconstructs and then reconstructs a fragmented narrative of her own which has a new temporal, visual and semantic scope.  The woman in the image is watched while watching; she pulls back, a process that we see deconstructed before us frame by frame, and locks horrified eyes with us as we stand, staring, in the dark. The presence of the camera asserts that we must, again, consider our role as viewers and as viewed, that we are wary of the assumption that we can know what we see.