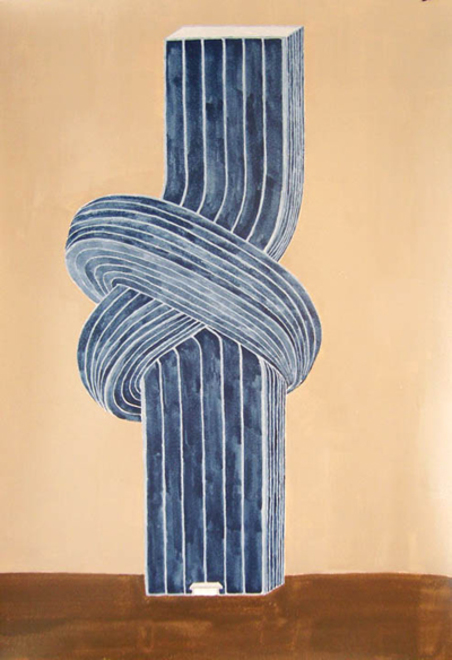 Andrew Berardini: Yes, this is a digital tape recorder. Speak loudly as this microphone is not as strong as I had thought. Does it look like it's on to you? So let me start then. Firstly, I'd like to say that I've never been to this Starbuck's before, it has a very desperate actor vibe to it. But that might just be because of those clones I see in line, is that Richard Grieco over there? (uncomfortable laughter) And secondly, I know that you have band practice in a short time, so I'll try to be short and concise with my questions. The last interview you did was part of the Edinburgh Fringe Festival where you made a quasi-conceptual performance working with retirees and security guards who volunteered to be your audience.  (I would love to see that!)  Again I promise you that this one will not be as lengthy and tedious as the last one was.  It seems to me that you are traveling a lot for exhibitions, so let me use that as a starting point to talk about questions of place and how that relates to being an artist.  It seems that a lot of artists I talk to seem to say that they really like to make work and show it to their friends, here in the city, as if, having a local community somehow fuels or helps generate a discussion about art, a sounding among colleagues and for many in LA, former classmates. Can you elaborate on this idea of space and making work here in Los Angeles? Or maybe, as an auxillary/addendum to that first question, I was wondering, if you, yourself, felt any deep and/or abiding connection to the art history of Los Angeles?

Joe Sola: I would prefer not to.

AB: A little bit louder next time, thanks Joe, I'm not sure if it's picking up your answers. This latest exhibition consists of a new video, "a short film about looking", 2010, where two men (played by you and artist Gerald Davis) perform what appears to me at first a play on the simple action performances of early conceptualism, as well as some deadpan commentary on what it means to be an artist, some over-the-top romantic notions of the intensity that an artist brings when looking at the world, like Kirk Douglas in Lust for Life. Are these all legitimate concerns with the work? And could you elaborate on the influence of conceptual art - whether you are most interested in the theoretical New York, the baked romantic California, or the absurdist, slapstick Dutch conceptualism?

AB: I have a lot of questions here that I wrote down, let me see if I can find them, okay here they are, I think. In the video itself, both you and Gerald Davis in the course of daily existence, take a moment and simply look, really hard, at different objects: a plug, a tomato, a gumball, a measuring tape, etc.. Some things are round, some things are square. One of the characters inhabits a large, deep space; the other occupies a shallow space. One space seems heavily designed and architectural; the other a mess, with exceedingly beautiful, disrobed women in it. The video concludes with a staring contest in a gallery-like space where there's a rather sad-sackish assistant and an elegant woman in black working in the gallery. The woman shows you two to your respective seats across from each other, where after some pretty intense looking, your and Gerald’s heads explode, and then the two gallery workers heads explode as well. Though I would like to later ask you some technical questions as per the exploding heads, if there's time of course, I did first wish to delve into the confluence of art history and science fiction in this work. (Is this thing on?) Even as I was watching, I caught the echoes (as I noted) of the simple action performances of early conceptualism, but I also couldn’t help but think of that scene in Scanners where the guy’s head explodes, the look on his face right before it happens. I feel like with this and other videos that you take some of the notions of conceptualism, particularly in the playful, humorous version endemic of LA, and take it to its absurd conclusion. How would you respond to that characterization?

AB:  Alright...also included in the exhibition are a series of watercolor paintings. They have this sweetly naïve style, but their subjects are often absurdly unrealizable. In one case, the work responds directly to the same imagery you play with in the video (an exploding head, for example) but mostly they create weird, unrealizable situations (though an exploding head itself is perhaps not the easiest thing to make up), such as missiles marked “yes” and “no,” and a Sola-Kippenberger collaboration where you tie each other’s cocks together in a very serious looking square knot, which I understand to be one of the strongest knots. You have said that painting is like writing, and that there are many kinds of writing: reportage, advertising, essays, legal, institutional, diaristic, etc..., and that your paintings are most inspired by writing that is literature, some contemporary some modern.  Would you talk about some of your favorite works of literature?

JS: I would prefer not to

Joe Sola, A Painting of a Book of Ridiculous Paintings (2009), Watercolor and pencil on paper, 23 x 23 in.; Courtesy of the artist

AB: Well, for me, despite the art historical precedents, I’ve also read a distinctly literary form of transgression at play in many of the works, which in some ways builds on the last question I asked about 'a painting of a book of ridiculous paintings'. Fiction writing and paintings I feel will always have value because of the simplicity of the materials and their equal ability to create what does not exist in the world with these relatively simple materials. This is almost Marxist. Sometimes the most original painting operates like literature, not only for it's ability to characterize or depict a space, but also in it's ability to create an image completely from the imagination, whether that is horror, humor, abject, or benign, at its best with poetical potential. Would you say that literature plays a greater role in your work than some of your earlier cinematic influences?

AB:  I wrote down here in my notes, though I don't remember writing it, that you said in an earlier discussion that you've participated on several experimental living/learning situations, almost communes. One at the Body Weather Farm is a small village in rural Japan studying Butoh dance with Min Tanaka, and then another in New Hampshire studying the American Transcendental literature with a bunch of, your words, 'bulgar bread-making hippie poets' from the University of Michigan. Would you say that these experiences have colored any of your recent performance work?

AB: Always as a conclusion, it’s nice to ask, what’s are you working on next?

ArtSlant would like to thank Joe Sola for his assistance in making this interview possible.

Posted by Andrew Berardini on 1/18/10
Tags: mixed-media, video-art
ArtSlant has shutdown. The website is currently running in a view-only mode to allow archiving of the content.