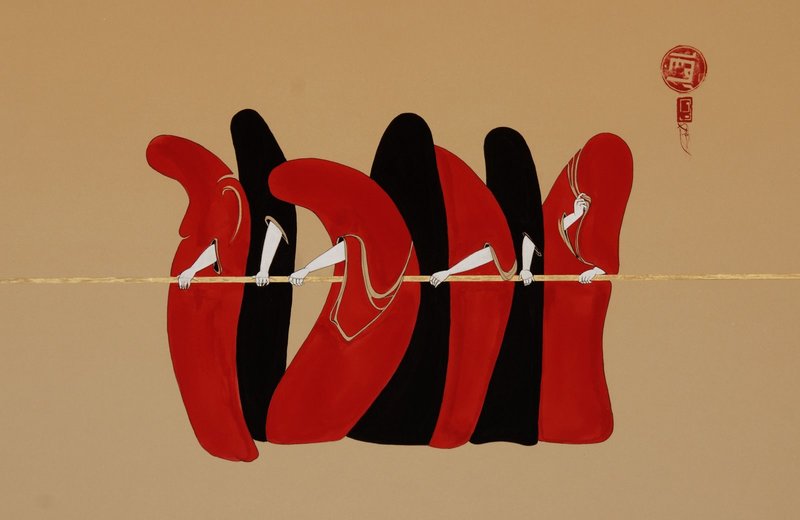 The Bagdad-born twenty-nine-year-old Iraqi artist moved to Sweden when she was eleven and studied graphic design at the Accademia di arte e design di Firenze in Florence. She currently shows with Dubai's taste-maker Third Line gallery and recently moved from Arizona to the San Francisco Bay Area. Here is the outcome of my recent email exchanges with Hayv, an artist whose work I have greatly admired for years.

Ana Finel Honigman: Are Western feminist theorists or particular Western artists such as Kara Walker or Amy Cutler influences for you?

Hayv Kahraman: Yes greatly. My major influences are mainly French philosopher and writer Simone de Beauvoir and American liberal feminist Betty Friedan. They revolutionized history questioning the traditionally accepted gender roles and were advocates for equality of the sexes. Their work is poetic and inspiring and has touched me deeply.

AFH: It's interesting to me that you, as an artist, cite Betty Friedan as a poetic and political influence. I find her fascinating for her actual activism whereas later feminist icons like Laura Mulvey, Judith Butler or even Andrea Dworkin worked mainly on symbolic and semiotic levels closer to art. Are you interested in feminist theory as well as feminist causes in history?

HK: Yes, I draw inspiration from many of the feminist ideologies both theoretical and practical. While I admire the work of Simone de Beauvoir and Judith Butler, I also believe that collective non-violent activism plays a major role in changing pre-existing perceptions. My work predominantly consists of representational activism. It’s a powerful non-verbal instrument of expression, and why not use it if it can be a catalyst for social change?

AFH: When you're making your work, how are you thinking directly of politics?

HK: Political issues - specifically gender based - are heavily present in my work. I feel a necessity or even a sense of duty to be involved in these issues. Having fled Iraq during war I’m constantly faced with the fact that I am not in the country of my origin, and while I live a safe and pleasant life in the west my fellow countryman and women suffer from unspeakable wars and injustices. As a result I’ve inherited an appetite for rebellion that exclusively takes form in my work.

AFH: What would you ideally want your work to help change in the world?

HK: Is it naïve for me to want to change the destructive attitudes and social dogmas regarding women? Am I being presumptuous when I hope for a speck of change? As much as I love the ideologies of the “aesthetic movement” and art for art’s sake, I’m still drawn to injecting meaning in my work. Robert Hughes once said; “If art can’t tell us about the world we live in then there is not much point in having it.”

AFH: Where do you feel most at home?

HK: This is a hard one. I am an uprooted Iraqi immigrant and I will be so for the rest of my life. Having fled Iraq at the tender age of ten, I wasn’t able to fully digest my Iraqi heritage. Due to war I was thrown into a completely different country with a different set of rules and language. Sweden became my new pseudo home and I had to learn how to adapt. The west gave me a wider perspective on life and it broadened my opportunities greatly but I always felt a nudge to return to my heritage. I think this shows in my work, and my paintings act as a gateway and a reminder of my identity; I will always be a tourist wherever I go. 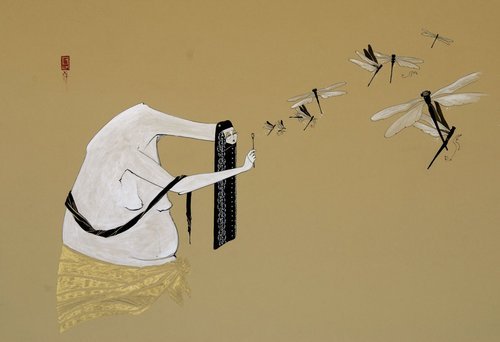 AFH: You have degrees in web-design and graphic design, yet your work directly references a host of ancient traditions pre-dating both fields. What influence has your education had on your work?

HK: This is correct. I studied design because I love problem solving and a part of me always thought that I would never be able to make a living as an artist. So, it sort of was my backup plan without any regrets whatsoever. My studies have really shaped me as an artist and given me the eye for symmetry, composition and design. It has allowed me to see the beauty in simplicity and the power of color. My previous work was very cluttered and erratic. There were just too many things going on in the painting. My studies helped me organize the imagery and strive for a cohesive balance in the work.

AFH: Were you addressing similar themes and imagery in your previous work?

HK: My early work was very subjective. I grew up as a surrealist believing in the power of the subconscious and dreams. The outer world didn’t really matter or at least that is what I believed. As my work has matured I still utilize “automatic drawing” in the process of creating a painting. It’s a technique considered to be a gateway to the subconscious mind by none other than Andre Breton. It entails a drawing process that has no predetermined thought or reflection. I don’t follow this fully but I try to incorporate it when I first start out on a painting. It’s very interesting to discover what surfaces and it sort of works as a dialog between my work and myself.

AFH: What is the general response to your work in the Middle East?

HK: The response has been good so far. In some areas the public is just not used to seeing contemporary women artists expressing their views on gender issues. It’s something that hasn’t happened before and might come as a surprise, although the general feeling I have perceived is quite optimistic and people are trying to understand what my work is about. I think the area is seeing exponential growth and the art world is blossoming.

AFH: How do you think the global recession will effect the art scene in Dubai, which always seemed really more hype than anything?

HK: Dubai was hit badly but there are some good signs showing up and the opening of the Louvre and the Guggenheim in Abu Dhabi will surely strengthen the reputation of the country.

AFH: Who are some of the other young female artists working the region you admire or feel an affinity for?

HK: Shirin Neshat is my hero! Her work is immensely inspiring and she really is a pioneer in her field. It’s an exciting time for female artists from the Middle East right now. Many are emerging with a powerful visual language and history is being made. 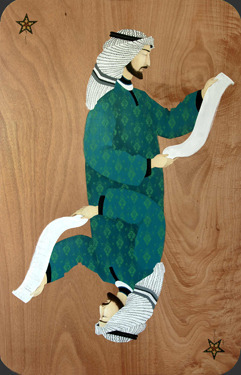 AFH: Have you noticed that men tend to have different interpretations of your imagery than women?

HK: Yes I have. The facts are simple; we live in a predominantly masculine world where men establish the rules and codes of the land. It has been ingrained for centuries that women are the inferior sex and many still believe that a man will most likely have an overall higher performance in life. I am not at all blaming the masculine sex here. I think the fight needs to be shifted against destructive traditions that have plagued us for centuries. Now is the time to ascend and recognize that both men and women are equal in life. And that is the essential message in my work. Weather a man, or a woman for that matter, will understand it or not is beside the point. I paint what I feel needs to be said in the hopes of touching the public in a rich and unprecedented way.

AFH: Have men expressed to you discomfort over your work?

HK: I don’t think discomfort per se although I have had a few men come up to me and make a joke or two about women “wanting” to stay at home while they are out working and making money.

AFH: You work a lot with metaphor, myth and symbolism. Why have you decided
to not explicitly represent contemporary reality?

HK: I’m a dreamer. While drawing references to the outer world is constantly present in my work, I do prefer to mix a cocktail of both reality and myth. I find it more interesting in telling a story that is conceptually based on reality yet visually symbolic and timeless. I gravitate towards a figurative approach in my visual language and sometimes when exploring difficult and brutal themes it tends to be too overbearing. So the intuitive response is to translate the brutality to a more tolerable image. And this is where the myth and symbolism come in. 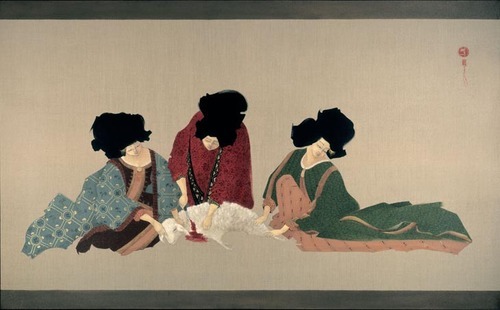 AFH: Why did you select the Sacrifice of the Lamb as the focus of a series?

HK: In that series themed “Sacrifice” I chose to portray a story of determined women taking conscious action on their current and future destructive social paradigms; inequality and injustice. The paintings present an analogy of the sacrifices that women make for the sin of being the weaker sex. This is disproportionate to the sacrifices that men make for their sin of power abuse. The lamb is regarded as a pure and innocent animal that in this series draws parallel to the female sex. The white lamb is an ironic visualization of the significant sacrifice (in orthodox Jewish code) for human sin.

The carefully calculated slit of the throat of the lamb is a metaphor of finally conquering misogyny by solid female assertiveness. An inspiring source to these paintings is the controversial story of Judith beheading Holofernes. The beautiful biblical protagonist Judith penetrates the general’s camp and convinces Holofernes through her eloquent speech and beauty that she is to be trusted. When Holofernes grants her access to his tent on a night of celebration, he gets intoxicated and lies on his bed drunk. She reaches for his sword, prays to God for guidance and beheads him, taking his head to her people, hence freeing and saving them from destruction. This is a biblical story where Judith contradicts one of the precious stereotypes of our culture, while actively empowering the feminine. The violence in my paintings is not to be interpreted as the way a woman should act but rather as a voice of upcoming revolution.

ArtSlant would like to thank Hayv Kahraman for her assistance in conducting this interview.

Posted by Ana Finel Honigman on 11/10/09
ArtSlant has shutdown. The website is currently running in a view-only mode to allow archiving of the content.