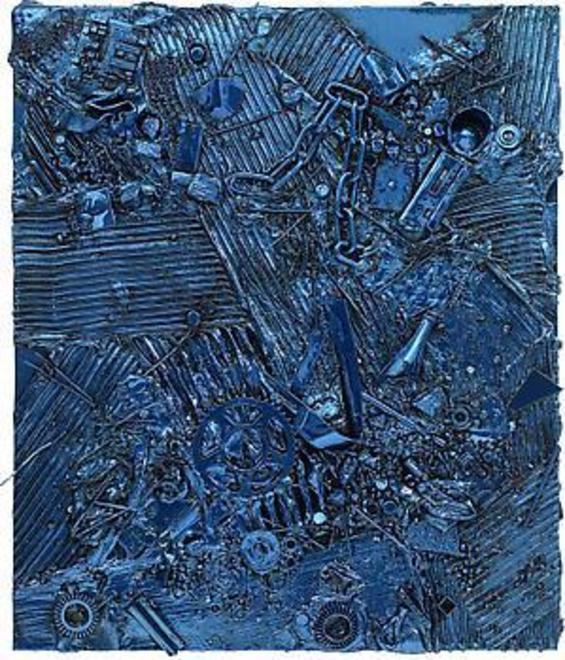 Entering Larry Gagosian’s 24th Street gallery in New York can be a daunting experience. The value of most of artwork on display often dwarfs the average person’s annual salary. It is one of the few, possibly even the only gallery I have ever been to that will not allow you to carry in a cup of coffee with you. The security guards hover suspiciously and are quick to instruct you to back away from the artwork. Though this is not unique to any one gallery, the employees sitting at reception rarely acknowledge your existence. Maybe this is all a clever marketing ploy to coax the general public into believing they have the pleasure of looking at some of the most exclusive works of art of the modern era. For crying out loud, the man hosted a museum quality Picasso exhibition earlier this year. Picasso! To live in New York and be able to walk through the doors of Gagosian is in some ways a privilege. Please note that you also have this privilege in Beverly Hills, London, Rome, and now Athens. “Go-Go” has built an empire and his knights are the colossal champions of modern art. So what does Larry have in store behind the frosted glass gallery doors right now? A divine example of contemporary painting and an astonishing body of work from a young giant in his solo show debut with Gagosian.

I didn’t do my homework before traveling to the gallery. I was in Chelsea the week before, over stuffing my senses with all the new work being rolled out for what is typically the blue chip season in the art world. I was towards the end of the session when I walked past Gagosian and saw ‘TAKASHI MURAKAMI’ typed on a sign indicating the gallery’s upcoming show. Had I read any further or even checked the website I would have learned that there would in fact only be one Murakami piece in the entire gallery. The main event would be Anselm Reyle.

I am embarrassed to admit this, but Anselm Reyle is not an artist I was terribly familiar with. I have seen advertisements for his shows in the past while flipping through Artforum (art porn if you will), or pictures of his work in books covering the latest in art trends. My exposure however has been limited. I was hardly prepared for the diverse array or scale of the objects on display. The massive chrome sculpture that greets you in the first gallery steals your attention immediately. Suddenly you are surrounded by a kaleidoscope of abstract sculptures and paintings. The pieces have a fetish quality about them. The artist’s chromatic spectrum moves the viewer to desire the mundane articles of debris. One cannot help but see the value of such objects when covered in a shiny, metallic patina, even if you feel like there is something inherently wrong about it. The show spirals through several galleries showcasing various stages of Reyle’s production. Some of the work is pure trance, pure form and color molded together to make a sublime aesthetic statement. What appears to have once been a lump of clay or plaster is suddenly on a plinth in a blue luster finish.  A mural-like sheet of steel, painted talc white with rusty overtones bleeding through, now assumes the role of a Reyle’s Guernica. Placed amongst the stark white walls of the gallery, all of the work radiates.

The reflection of the viewer in Reyle’s work really struck me. Watching your body morph from form to form or hue to hue as you negotiate your way around the sculptures creates unique surfaces with each encounter. As you circumnavigate Philosophy, a massive modernist sculpture consisting of a repetitive interwoven chrome form, your reflection actually takes its place in the work itself. The piece absorbs whatever colors may happen to be in your view, be it the purple or green painting hanging on either wall or a woman’s handbag as she passes behind you. The morphic quality of the piece presents so many visual toys with which one can play.

A new painting by arguably one of the biggest artists in the world hangs by itself in side gallery, almost quarantined from Anselm Reyle’s work. Japanese Pop Don Takashi Murakami’s A Picture of The Blessed Lion Who Stares At Death is a massive four panel, color saturated rendering of happy holocaust. The imagery is culled from traditional Chinese art forms ranging from mythical creatures to calligraphy. A smiling Karajishi (translation: China-lion) sits atop a rainbow of candy colored human skulls. As you approach you see how intricately each of the skulls is painted. The varicolored make-ups appear unique to each one with outlines in the eye cavity, allowing you to move from one side of the painting to another always discovering a new combination. On either side of the Karajishi you find waterfalls of vibrant acrylic pouring into the abyss beneath. The background has a cloudy glow that shifts in and out of light and dark from panel to panel, sometimes assuming a pattern of dots. The mesmerizing work held me in place for a good ten minutes. I couldn’t look away as I kept finding minute details of the work that continually drew me in further.

At the Murakami survey hosted by the Brooklyn Museum last year there were studies that showed the meticulous planning that goes into these paintings. The placement of each color is determined by marking the space with a number in a blue print. The work is much like a building with every aspect thought through prior to ground being broken. The artist vision is like that of an architect or a composer of classical music, applying tested formulas, years of training, and creativity to achieve the expected outcome. The result in this case is a profound, ethereal experience.

The work at Gagosian harks back to another time in art making while remaining distinctly contemporary. Reyle, with his modernist forms and finishes reminds me of the Minimalist artist Donald Judd’s use of auto paint on his sleek sculptures. Or Murakami, who pulls from the traditional arts of the East and produces work in a Warholian factory fashion. It is a feast for the eyes. Anywhere you look you are surrounded by such a highly exaggerated range of color. The gallery in which it all sits is, as Roberta Smith called it, the “Fort Knox” of the art world.  It reminds you of how big art can be, and for some that is the thrill. To feel dwarfed and overwhelmed by the art and its aura can be intoxicating. If nothing else, you are able to see artists that will more likely than not be hanging in some of the more exclusive museums in the world in the coming decades, and to me that is exciting. Regardless of what is said about an artist or their work, good or bad, witnessing art in the moment is a special thing. To think of going to a Jeff Koons show in the 80’s or an Andy Warhol show in the 60’s is pure fantasy. But take some enjoyment in the fact that you can see the great contemporaries exhibiting their work right now.

Under the Radar: Isabelle Schneider | Amanda Ramsay | Lauren Singer
11/16/18
COMMENTS (1)
Interesting Review
Thank you Philip for such a great review.
Comment by: ArtSlant Team on Thursday 10/29/09 at 5:02 AM
ArtSlant has shutdown. The website is currently running in a view-only mode to allow archiving of the content.