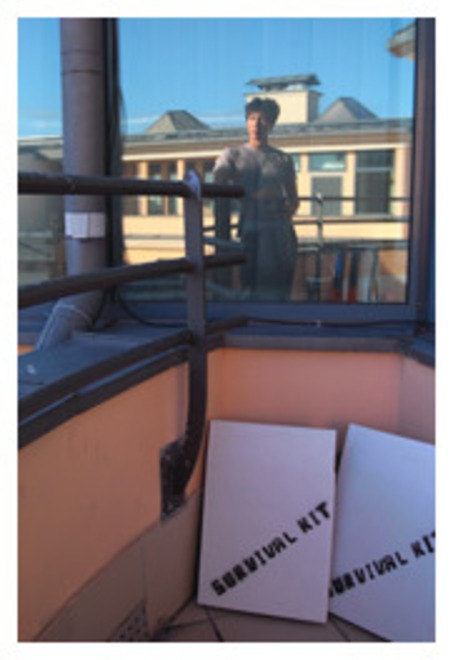 Walking down the wide streets of central Riga, with its gorgeous collection of Art Nouveau buildings (over 750, the most of any city in the world), I am occasionally unnerved by bicyclists who speed down the sidewalks within an inch of a spill.  There are no little tinkling bells warning their fellow pedestrians, though admittedly this defensive form of walking is a cheap thrill, like little insects surviving in the food chain.  Bicycling by the bigger numbers is a relatively new phenomenon here, where the economic crisis has taken a toll on riding gas-guzzling cars.  Those continuing to drive are apparently a reckless hazard to their two-wheeled pedalers, who have decidedly not taken to the streets.

My first two days here I explored medieval Old Riga, wonderfully preserved and restored. The city itself is filled with Soviet-era block-style apartment buildings, incredibly quiet streets, and a friendly population that is reserved and respectful.  This is not to say that the city is not lively, as that dimension certainly exists. But there is less of that spirit at the moment, with the country’s rapidly contracting economy under eminent threat of a collapse, its credit rating reduced to junk status, massive reductions on school and hospital spending, and all this to go with the coalition government’s implosion in January. Though they certainly don’t long for the 1991 pre-independence times, Latvians may be feeling the worse pinch of all the European Union countries.

As a visitor, one couldn’t really tell of the despair lurking behind Riga’s manicured Jugendstil facades and ample, clean-swept boulevards and small cobblestone streets. Less we forget, the Latvian capital is on the shortlist in consideration for Culture Capital of Europe in 2014 for a reason. So let’s talk art a bit.

In Old Riga, I visited the Riga Art Space, a small museum that featured Zeitgeist and the Atmosphere of a Place, an exhibition of the multimedia artist and architect Hardijs Ledins.  The show takes a look at Ledins’ Modernist architecture analysis of the individual’s existence within the 1980s city environment, and in the well-represented documents and photographs, one almost feels a sense of nostalgia towards the blocky buildings, which still stand today. Nearby at the Latvian National Musuem of Art, a traveling exhibition titled Private looks at contemporary Latvian photography through the lens of seven artists, including Vilnis Vitolins, whose saturated color interiors of Latvians in their equally bizarre and saturated (e.g. cluttered) domestic spaces would give David LaChappelle a run for his money. Another highlight in the show is Arnis Balcus, whose installation of old family photographs and constructed, new images tell the tongue-in-cheek but visually compelling story of a Latvian young man who goes to London to study, falls in love with a Muslim woman, gets married, and comes back home to live in Riga.

So that was yesterday afternoon.

The main reason I am traveling in Riga is to participate in a seminar (Playing Chameleon, curated by Anda Klavina) on art and the sunken economy, organized in conjunction with the festival Survival Kit, which opened in the evening. Coupled with the delicious apples and pears that are in season, the city known as the Baltic Paris is alight with this timely exhibition.  Curated by the Latvia Centre for Contemporary Art, Survival Kit utilizes vacated commercial properties that have gone bankrupt over the last year as economic crisis casualties.

Showing art in unused public spaces is not new, and there is plenty of it going on worldwide. And surely anyone can put on a show in a squatter’s space, but is it ultimately worth seeing?  What’s different about Survival Kit is that it is a concerted, citywide effort resulting in a well-organized, strong, and cohesive statement. The mantra for the festival might be “We will make it through this, and this is one way how.” For two weeks the festival is taking over storefronts that were formerly casinos, restaurants, perfume shops, clothing boutiques, etc., and presenting a spectrum of responses on how to contend with the devilish economy.

The fifteen-plus participating spaces each takes the uniqueness of its previous commercial life and suggests something more sustaining (hopefully). In no particular order of what was most memorable, I’ll begin with Kristaps Epners’ installation It’s a Dog’s Life.  The artist recreates a Scandinavian dog farm where huskies are kept leashed and fed only to wait for the winter, when their special coats and sled-pulling abilities make them a cold-hot commodity. Epners has faithfully rebuilt these kennels, each individually marked with a dog’s name and the amount of food it requires daily.  In place of the kennel doors, the artist embeds a monitor showing the dog and its real, very limiting day-to-day activities. The animals don’t appear to be mistreated, yet there is no freedom. The poignancy of Epners’ installation lies in its palpable, uneasy feeling of despair that perhaps can come not only with incapacitation, but also – 19 years and counting – liberation.

Design Group Zafte produced an installation/fashion show in a previous high-end, clothing boutique.  Members Inara Gauja and Ingrida Zabere used old clothes and garments to make their new ready-to-wear collection.  Though seeing pretty models joyously catwalking the roundabout rug and sharing a single baton “flour bag purse” provided a moment of escapism, the message might have been better delivered had the clothes been constructed with the closed stores’ draperies and upholsteries. This might have made for a more effective statement, considering that recycling second-hand clothes is by now a common staple of designers seen regularly in Fashion Week.

Every survival kit must include a match, so Kus Magazine asked the question “What are you going to do if there is only one match left?” 200 comic book artists and illustrators answered the call on sheets of paper sized to a matchbox. In place of a nail, each little work hung elegantly on its own, what else, matchstick.

In yet another defunct clothing store, Egija Inzule and Maja Wismer curated Is a Show, Is a Shop, Is a Book. The ambitious program in this pop-up bookstore will encompass guest lectures, talks, performances, and of course art books that are for sale. Hard to believe, but no such bookstore currently exists in Riga. Judging by the constant flow of hungry readers, the need for such a shop is in high demand. It seems the e-books have not yet won the war, and sometimes going back to simpler roots might very well provide the answers.

The most fulfilling – gastronomically at least – performance of the evening had to be the soup kitchen where Riga’s poets and artists cooked up some hearty fare and served it for free to all passerby. I imagine some of the most difficult problems were solved during kitchen chatter or over a meal.  Hunger is no laughing matter, though, and this particular happening organized by Katrina Neiburga is evidence that in a struggling economy, survival begins with a little sustenance. Cuisine meets creativeness.

After Riga gained its independence in 1991, Soviet street names and monuments were removed, including the Lenin statue on Brivibas (Freedom) Boulevard. As one of the parallel events to Survival Kit, Aigars Bikse recreated the giant statue (slightly smaller in scale) out of a blue tarp material with a wooden pedestal.  A lit text on the latter reads “Idealist. A Two-Minute Cycle of Historical Justice.” Starting right at midnight, the figure, which was initially deflated, filled with air and came to life, right arm raised in salute. Placed exactly where the original was before, and opposite the Cabinet of Ministers, Bikse’s version continued to alternately slump and then resurrect with authority. We may be feeling a bit blue right now, but justice, history, and economic depressions ultimately come and go. Until then, do as Lenin does and not as he said.  Breathe in. Breathe out.  And “after midnight, we’re gonna let it all hang out…”

There’s plenty more to see, but for now, that’s a wrap from la petite Paris and Survival Kit.

Images: From Top Left (across and down): One of the many Art Nouveau buildings in Riga; Pears and apples in season; Arnis Balcus, Contemporary Latvians (2007) installation at Riga Art Space; 1975 photo of Lenin statue in Riga; Aigars Bikse, Idealist. A Two-Minute Cycle of Historical Justice (2009); Egija Inzule and Maja Wismer, Is a Show, Is a Shop, Is a Book; Kristaps Epners, It’s a Dog’s Life (2009); Design Group Zafte, Boutique Fashion Recycled fashion show; Lotusland soup kitchen; Kus Magazine, The Last Match installation.