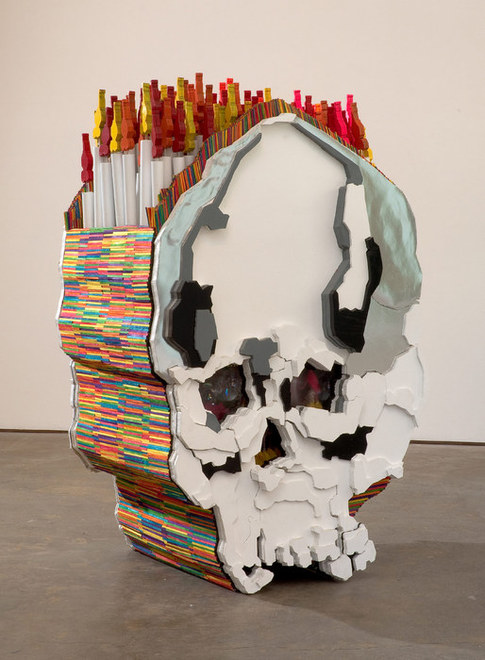 by Catherine Wagley
The Sundowners isn’t a group show; it’s a one-minded collective. The work belongs together, as if the six artists secretly made a blood pact and then brought the fruits of their séance to The Happy Lion Gallery. The gallery space becomes a communal terrain within which dislodged narratives attempt to find their place.

The six artists featured in The Sundowners are all in the early stages of their careers, having graduated from MFA programs at Claremont Graduate University and the San Francisco Art Institute within the last few years, and their work has a youthful immediacy. Candace Lin’s lyrically painted watercolor, Rogue girls, ridden by the hysterical spirits of Dr. Charcot, depicts six women battling the ghost of the French neuropathologist. Lin gives a vicious narrative of the history of hysteria but, next to Spencer Douglass’s illusory Mouth of the Mattole, Rogue girls reads as a sincere attempt to grapple with the mountainous landscape of historical narrative.

In Lin’s gory video, titled Little House on the Prairie and cleverly installed at floor level, a little house goes up in flames. On the wall opposite Little House, Meghan Reid has used collaged matchsticks as sun rays radiating out of the roof of an urban home. Reid’s assemblage reacts to Lin’s video, as if saying, “Well, yes, we could burn it down, but couldn’t we also light it differently?” On the floor, Naomi Buckley’s No one gets to keep anything forever participates in the dialogue, trying to burn and relight at the same time. Buckley’s figural sculptures simultaneously salvage and silence the characteristics of the roof tiles, digital prints and duct tape that make up their forms. The Sundowners creates a poignant world for itself, one in which questioning can occur and recur for as long as it needs to.