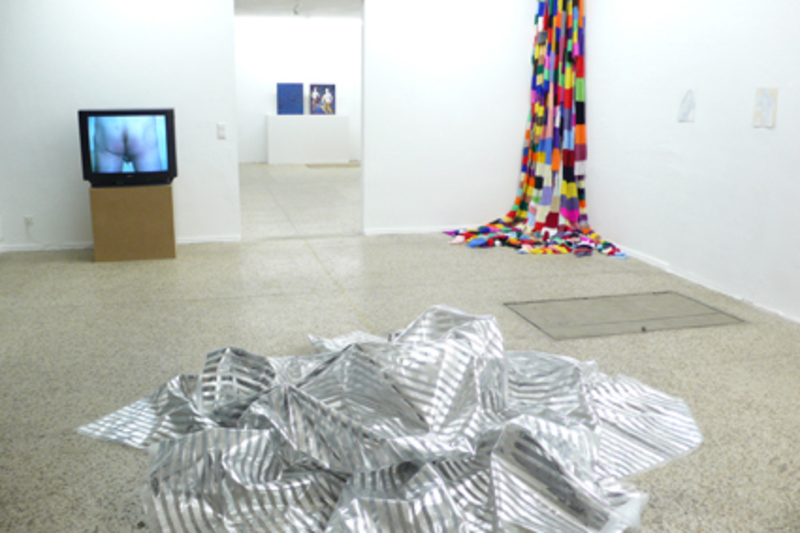 Andy Warhol's dictum that "Making money is art and working is art and good business is the best art," is often cited as a paradigm-changing contribution to contemporary art. In today's economy, however, artists need to re-evaluate those values and find other ways to gauge the cost-benefits of creative endeavors.

One such approach is offered by the moving and thought-provoking group show "More Love Hours That Can Ever Be Repaid," curated by Aaron Moulton at the Feinkost gallery.  It takes its title from Mike Kelley's seminal 1987 work by the same name. Kelley's show consisted of soiled stuffed animals affixed to a wall hanging which anthropomorphized the toys' fragile fabric bodies as martyrs to children's careless emotional demands. By contrast, the Feinkost gallery offers a humbling and inspiring array of process-oriented work produced by artists whose intimate emotional investment into each piece outshines the physical evidence on view.

One work evoking the stuffed animals' sacrifices is a 1991 video by Bob Flanagan, Sheree Rose and Mike Kelley titled "100 Reasons," which presents a performance of masochism and corporal punishment conflating pain, redemption and love. In another pivotal piece, redemption, but also relief, are plainly part of Cristiano Mangione's magnificent obsessive mark-making, which turns oversized sheets of canvas and the wall of his apartment into victims of his compulsive OCD hyper-activity.

However, subtler, sweeter and more commonplace exchange of sacrifice and affection exists in the two separate mother-child pairings in the eleven-artists show. On the floor, near the television set where "100 Reasons" is screened, is a low-tech surveillance blanket arranged in a crumbled form by Daniel Baker. The plastic material is adorned with mirrored stripes like those used in off-license cashiers' windows in the UK. People positioned behind the strips can see out but those outside can't see in. Baker intended visitors to crawl under the blanket and enjoy the comforting nest it could create.
A similar enveloping cocoon could be made from pastel wool knitted by Baker's mother, Celia, and hung in a spill from the gallery ceiling. For Celia Baker, making the impractically oversized scarf-shaped strips was a calming experience, but its proximity to her son's makeshift security blanket transforms her soothing habit into a lovely maternal gesture reaching out to envelop her child in warmth and protection.

In many ways, Sarah Pucci's series of hyper-elaborate kitsch sculptures can also be seen as receiving similar protection and care, in this case from Pucci's daughter Dorothy Iannone. Iannone is an established artist whose vibrant shamanistic sexual paintings are also on view in Feinkost, but her mother's work was private and unnoticed by the art-community before their posthumous inclusion in "Love Hours." Described by Moulton as "scintillat[ing], an aura of idealistic beauty on steroids that grows into a delicate grotesque," Pucci's sculptures are the summing-up of countless personal hours spent carefully crafting private totems to her personal aesthetic, which she then generously sent to her grateful daughter who returns the favour by showing them here.