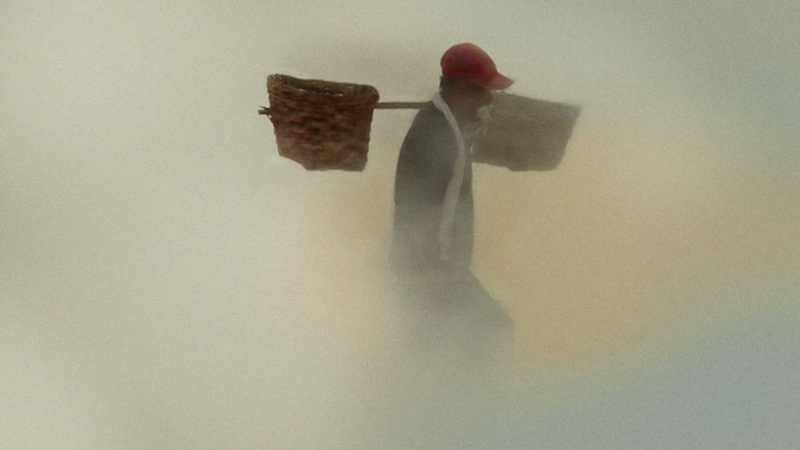 One can enter the loop of Darren Almond's 35 minute video 'Bearing' at any point; the viewer is bearing witness to a Sisyphean task. In the caldera of an Indonesian volcano, workers lay sections of pipe to channel the sulfur-laden steam venting from cracks in the earth. In one scene they 'seed' the plume to form precipitate, creating a hiss as sulfuric acid is made. People enter and disappear into the clouds, chipping away at the bright yellow rocks.
For the extended middle section of the video, Almond straps his HD cam to the body of an Indonesian sulfur porter, hauling close to 80 kilos up to the rim (in addition to the camera). The shot is tight on his face, and the porter breathes heavily through a wet rag clenched between his teeth, re-purposed as a makeshift filter. Over his shoulder, the viewer catches glimpses of the caldera's turquoise lake, bright chunks of yellow sulfur, and a sublime view made insignificant by the torture of the task. One can hear (but not see) other porters as they endlessly make their way up and down the slope of the mountain.
The long shot of the porter's hike (as is the entire video) is shown without voice over or commentary. The viewer's personal politics and sympathies are allowed free association. The gray in the porter's sideburns may invoke the eventual decrepitude that will bring his task to an end. Neo-liberalism points to the eventual uses of the porter's labor--plus raw materials--as sulfur is used in the refining of everything from oil to white table sugar. I shall leave it to religious and otherwise superstitious folk to make their own associations between the Old Testament's term for the element--brimstone--and Almond's video.
The news media bring us the results of globalization's economic force pushing people, products, and productivity like so much economic flotsam. Statistics transform Mother Earth into Market Price--as hydrocarbon-rich dinosaur sludge becomes the fluctuating rate for a barrel of Sweet Texas Crude. In the art world, seldom is revealed the personal among the protean mess. For  that rare personal connection to the other end of your supply chain, visit David Patton Los Angeles in Chinatown before the show closes on Saturday January 10.
Posted by Michael Buitron on 1/6/09
Tags: globalism, video-art
RELATED ARTICLES