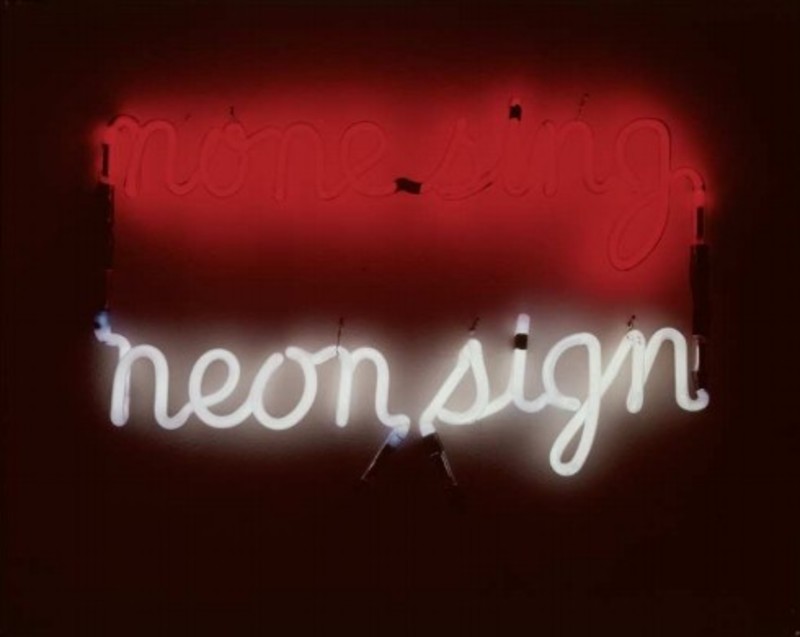 On the face of it, this exhibition, Néon. Who’s Afraid of Red, Yellow and Blue? is just plain fun. With the Maison Rouge all lit up in different colored neon lights, both industrially produced and hand-crafted  tubes bringing the walls to life, inviting us to walk into spaces saturated in impossible colors. A visit to Néon is ostensibly a joyful, light way to spend an afternoon. Then as we quickly realize, neon has more to it than meets the eye. Neon lights may look pretty, but they are potentially lethal: the transparent rarefied gases enclosed in glass tubes, shot through with an electric current are dangerous if leaked: helium, argon, mercury, and of course, neon are not to be inhaled. Thus, the art works may look light and fun, but they are made of materials that are simultaneously fragile and dangerous.

The exhibition is ambitious in scope. Although it disclaims to be a retrospective, it does cover the history of art in neon lighting from the immediate postwar period through (to my mind) the great conceptual artists working in neon in the 1960s and 1970s, and then onto contemporary examples. And the exhibition is also concerned to remind us that neon lighting, the invention of Frenchman, Georges Claude, in 1912 began its public life illuminating the streets by night. Given this vast territory covered by Néon, from the beginning, it sets itself up to disappoint. And indeed, its expansive embrace makes it unwieldy and overwhelming. 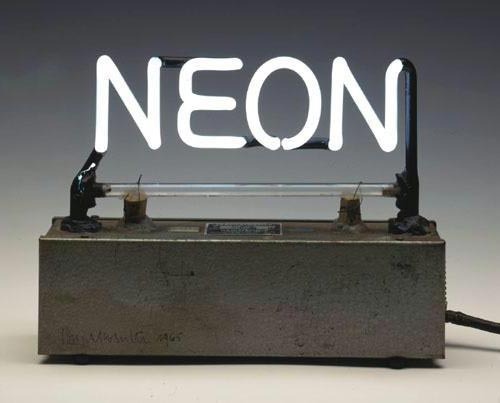 When I first entered the exhibition I was also concerned that all of the works were hung as if they were paintings on a wall. Surely the whole point about light art of any kind is that it is only brought into existence through the space that it creates. Light art both transforms the space that it occupies and is defined by the space that makes it. The conceptual works of Joseph Kosuth, Sarkis, and Alfredo Jaar among others in the first rooms of Néon, of course, use light intellectually, to challenge the significance of language, to crack open the lies of the historical past. But even these somber works, even though they are displayed as artworks, are not meant to be looked at in the same way we might ponder a painting. Indeed, difficulty of looking at them is palpable, as the flickering light challenges our look, creates headaches and dares us to look away, to rest our eyes. This iconoclasm and the conceptual drive of these works makes looking at them as paintings in a gallery very problematic.

However, despite being quick to criticize, once I was inside, especially by the time I reached the room collecting works entitled Crisis, a room in which works by a number of artists turn the space red, I had to reconsider my judgments. The further into the exhibition we venture, the more consuming is the experience of complete immersion in color, light, and when the two come together, their threat and simultaneous excitement. These works create reflections, headaches, vibrations. Their interaction with the floor and the walls, creating afterimages, giving off warmth, and generating a gentle buzz throughout the galleries I watched people taking photographs of the works on their cell phones and cameras, and the magic of light laughed at their attempts to document: the image in representation creates a whole new work that, because of the composition of neon, at times only slightly resembles what is seen by the naked eye. 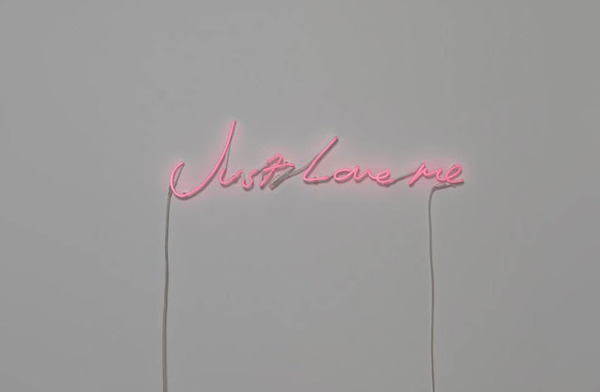 Tracey Emin, Just Love Me, 1998; Courtesy of the artist and La Maison Rouge
When I reached the room entitled Les Pionniers, I breathed a sigh of relief. These works by Nauman, Mario Merz, François Morellet, Piotr Kowalski, still stand out from the rest because they engage with neon in complex and creative ways. While more contemporary artists use neon in ways that suggest it could be replaced with other media (why does Tracey Emin’s work need to be in neon for example?) the pioneers take up questions of the tension between the old and the new, nostalgia as it is written in light which is supposedly at the technological vanguard. Nauman’s work, for example, not only plays on words, thereby demonstrating the emptiness of language, but the letters of None Sing, Neon Sign stammer and stutter as though they might not be working properly. Nauman thus exploits the inherent dynamism of the properties of neon, as well as its flaws, and then, pushes the light onto the verge of malfunction.
Today the discourse in neon is old; at least as a form of lighting, it might be seen as of another era. Neon lighting hasn’t changed much since the days when it dazzled the streets of pre-World War I Paris, and then by the 1920s, the major European and US cities. And as a substance or material, it can only be manipulated in so many ways:  it is what it is, an electrical current passed through a rarefied gas and cased in glass. In addition, there’s something about these gaudy lights, the trashy neon sign that reminds us of the hopeless aspirations of Tony Camonte in Howard Hawks' Scarface (1932) where the neon light is the emptiness of capitalism on display. And this is a capitalism that is now old. Because the aspirations, accumulation and wealth of the world's great cities is no longer written in neon lighting. Neon is a medium reflecting the intensified moment of industrial development in the years on either side of World War I. All that said, the best contemporary works in Néon are those that engage with that past, appropriate it, even if they don't criticize it, because in that gesture a tension and depth is created in the conversation between past and present.
—Frances Guerin