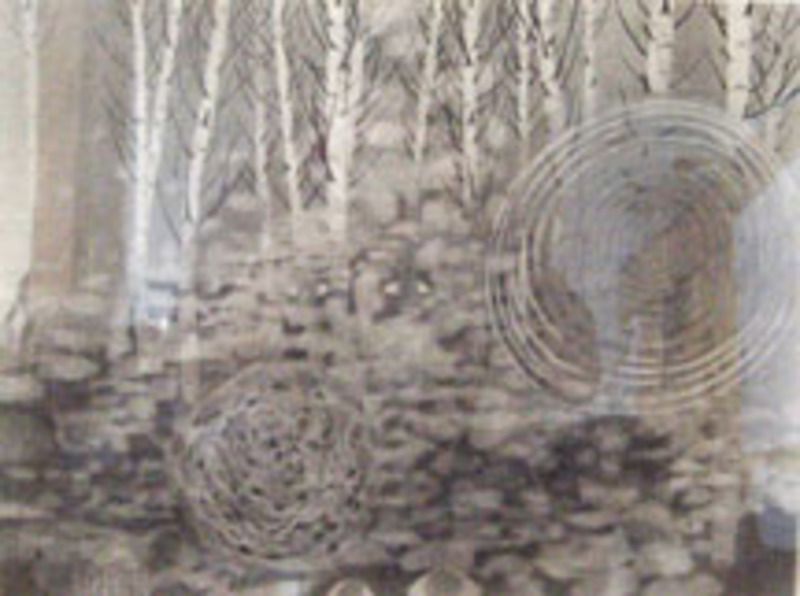 James Kelly Contemporary is pleased to announce a group exhibition exploring the reemergence of drawing and works on paper in contemporary art, with a focus on emerging and mid-career artists who are exploring the concepts of myth and mystery. This will be the first exhibition for all of the artists in the gallery and in New Mexico.

Blaze Lamper lives and works in Brooklyn, NY and received a BFA from Cooper Union in 2005. Lamper’s graphite drawing of a dark forest reads as if you are looking at a reflection, yet upon closer look the viewer is actually the one being watched. Pairs of eyes emerge from the murky forest pond scene staring out at you.

-Chris Larson lives and works in St. Paul, MN and received a BFA from Bethel College, MN in 1990 and an MFA from Yale in 1992. His drawings of other-worldly machines are hybrids of Rube Goldberg constructions and mechanical fantasy from the movies that seem to have no clear purpose. Intricately detailed, the drawings force the viewer to question where these fantastical machines originated and what function they were dreamt up to perform.

-Billy Malone lives and works in Queens, NY and received his BFA from East Tennessee State University in 1996. He refers to his work as “hillbilly landscapes,” detailed constructions of discarded pieces of wood fastened together in a haphazard manner with all sorts of found objects perched on top or incorporated throughout the setting. These still life drawings are a contemporary take on Dutch Vanitas paintings in the selection of objects that accompany the architectural forms (including plants, beer cans, insects, snakes, bundgee cords and antlers).

-Aleksandra Mir lives and works in Palermo, Sicily and received a BFA from the School of Visual Arts in New York in 1992. In her most recent body of work, Aleksandra has made collages that combine religious iconography with images of space travel. Mir sought to answer the question “If angels and astronauts share the same sky, isn’t it time they were introduced?” The melding of iconography and space travel was a natural combination for her. Living in Palermo, she is surrounded daily by similar examples of religious imagery, and she has been fascinated with space flight and travel from a young age and has explored the theme before in many of her earlier works.

-Kent Monkman lives and works in Toronto, Canada and received a BFA from Sheridan College of Applied Arts in Brampton, Ontario in 1989. Monkman explores the myths and tales of the Wild West from a unique perspective. The drawings on view are studies for large-scale landscape paintings done in the style of Thomas Moran and Albert Bierstadt, but with his own trickery added in. Monkman’s work calls in to question the authenticity of the myths and tales of history and re-interprets them in a modern context.

-Mio Olsson lives and works in Brooklyn, NY and received a BFA from the Malmo Art Academy, Sweden in 1998. Olsson explores the concept of space in her “silly things,” three-dimensional drawings that force the viewer to confront their surroundings. Although playful in nature, Olsson’s installations of drawings and constructions made of paper, reference various landscapes and are a new take on the traditional practice of drawing.

-Eamon Ore-Giron lives and works in Los Angeles, CA and received a BFA from San Francisco Art Institute and an MFA from UCLA in 2006. Ore-Giron explores the meeting point of cultures and is influenced by his own multicultural background. The delicate gouaches relate to Native American culture in the repetition of pattern, the chonguinada culture of Peru in the mask imagery, and Hispanic culture with the skull imagery.

-Ruby Osorio lives and works in Los Angeles, CA and received a BA from UCLA in 1997. Osorio’s work examines feminine imagery in a contemporary context, by making art using traditionally thought of as female materials and imagery. Hand stitching, collage, and intricate watercolors of flora & fauna, and females in varying states of undress explore notions of love and loss, family, relationships, and entrapment.

Posted by Abhilasha Singh on 2/22/10
RELATED ARTICLES
COMMENTS (0)
ArtSlant has shutdown. The website is currently running in a view-only mode to allow archiving of the content.