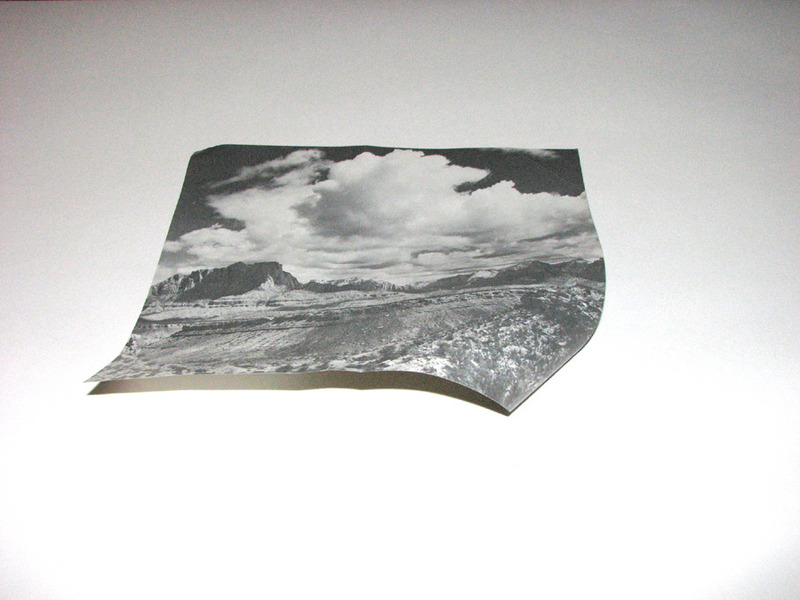 I’m told that Air Waves is a transmission. And this ambitious, fun and intriguing group exhibition broadcast is received at Painted Bird, a vintage clothing shop that curator Jasmin Lim (also an exhibiting artist) describes as the “antenna.” Confronted by Lim’s mysterious announcement card, or the press release, which consists of two lines from the Kraftwerk song “Antenna,” (which is also the title of this review) one might find the curatorial conceit behind Air Waves to be the product of discursive reticence, a form of conceptual driftwood, or some sort of eccentric sabotage deployed to put us out to pasture. Perhaps it is instead a cryptic treatise on the essentially unstable nature of form and media, and of the complexity of perception.

The opening reception was something of a transmission, with experimental/noise performances by ACWAY and Hana Lee taking place completely in the dark (save the dim light cast by a few spare videos). In between each set, bright lights were turned on and the more material works came into view. Lining a wall just above several clothing racks, photographs and digital collages by Joshua Churchill, Chris Fallon, Dana Hemenway, Lim, and Paul Schiek offer rather unnatural depictions of the natural world. And these strange landscapes continue in smaller polaroids by Sean McFarland and c-prints by Lee, Daniel Hipolito, and P. Wingert, as well as in a fairly retro-futuristic illustration by Corinne Matesich. Searching the store, these works are nestled into all available spaces—above hats and wallets, behind the cash register, outside the dressing room, and so on.

Meanwhile, silent videos pepper the space. In Michael Guidetti’s Ocean, 2008, displayed on a monitor atop a pedestal, something of a trapezoidal wave appears to morph and levitate above a still ocean horizon. The geometric shapes in Nate Boyce’s Untitled, 2009, seem to be self-destructing, as if magnetically warping at the left of the screen. Zane Morris’ Mirage, 2009, looks like an analog broadcast caught between channels—with fireworks, mountains, traffic, and swinging bells overlaid or transposed from every direction—but on a laptop and in a glass jewelry case. On a monitor atop a shelf and surrounded by shoes, Lindsey White’s Common Senses, 2009, shows a diptych of what looks like the same waterfall, cropped through the same cylindrical form, and its water seems to flow with and against gravity, in forward and reverse.

Befitting a transmission, the physical properties of sound waves can be seen through their effect on visible matter in Nate Archer’s You’re A Legend In Your Own Mind, 2009. Archer’s curious construction looks like a wooden table adorned with a solid asymmetrically shaped piece of glass covering a hole. On lifting the glass, sound emanates from within and a concealed black light shows particles of dark sand flying about in patterns as they vibrate atop a speaker. One can only speculate about Keegan McHargue’s Delicate Poetry, 2008, however, as McHargue stipulates the contents of his cassette tape must not be heard. Another cassette by Hipolito, provided with a Walkman and headphones, corresponds to his c-print, Woods, 2009. A rather dark and atmospheric recording, its intent is to sonically caption the abstracted photo, but the obstacle of the store’s sales counter makes the connection difficult. Peter Coffin’s Untitled (Gallery Soundtrack, 415-401-7027), 2008, can be heard by calling Painted Bird. A storekeeper answers the telephone and plays Coffin’s rapidly cross-fading field recordings and samples—from hippos and flies to bed squeaks and sex moans. It was also played during the opening reception between performances.

Because a Walkman, headphones or the telephone mediate the experience of the sounds, the idea of a vintage clothing shop transmogrified into an antenna becomes harder to feature. And some may find in all of this too high a dose of the familiar, hipster-filtered, west coast transcendentalism (often found in clothing shops) that contributes to various clichés, caricatures, and unwarranted assumptions about Bay Area cultural production. However, Air Waves is not your mother’s weed-infused-psych-jamming-energy-dispersal, nor is it likely that Lim really thinks Painted Bird is an antenna. She’s not insane. It’s more reasonable to say that what Air Waves transmits is aesthetic information, and it does so through a largely compelling array of works—each demonstrating something about the mechanics of perception.

In that sense, it is unfortunate that Noel V. Harmonson’s Hypnic Apparition, 2007, was only on display during the opening reception. There, equipped with a pair of LED glasses and headphones, I closed my eyes and saw a series of shifting light patterns flash through my eyelids, seemingly synchronized with the ominous droning in the headphones. Of course, any synchronization was a cognitive construction. The affect of Hypnic Apparition may result from the sensory stimulation and physical alienation introduced through those electronic apparatuses, but the work itself exists in that hypnagogic, perceptual space created within the mind of the receiver. Maybe seeing the apparition without the glasses is what Air Waves is all about.

Perhaps that’s how all of the works operate, there, in the antenna.

All images courtesy of the artists.

Posted by Chris Fitzpatrick on 10/19/09
RELATED ARTICLES
COMMENTS (0)
ArtSlant has shutdown. The website is currently running in a view-only mode to allow archiving of the content.