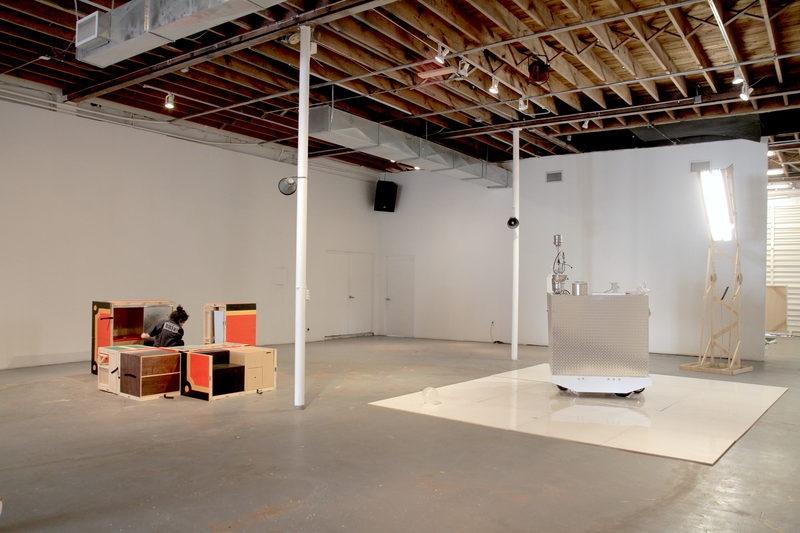 At Locust Projects, a Tale of Two Factories and Two Artists

As we seemingly find ourselves spectators to the acceleration of political and environmental decline, two Israeli artists, Rotem Tamir and Omri Zin, are targeting industrial factory processes in an exploratory, performative project. The husband-and-wife team are collaborating for the first time in Larval Acceleration: A Conversation in Chunks at Locust Projects in Miami. The piece encompasses two independent, modular “factories,” each managed and operated by the respective artists.

Tamir’s factory produces helium-filled latex balloons, in various organic shapes and colors, that rise to the ceiling before falling to the floor over a 24-hour period; Zin’s factory renders an industrial byproduct made primarily from lard (pig fat) that is pressed on the floor and will gradually build up, hampering the function of his factory, which is a mobile unit on wheels. Besides the obvious reactionary connotations, Larval Acceleration is an active dialogue between two disparate practices as they come together for the very first time. It’s both a testament to a personal and artistic relationship between the artists and a comment on the functional relationships between humans and machines. 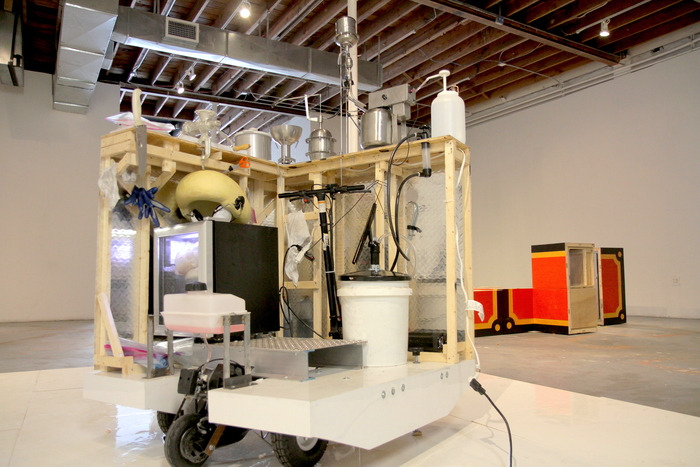 Zin and Tamir first met as undergraduate art students at Bezalel Academy for Art and Design in Jerusalem. They moved to States to pursue MFAs and stayed for teaching positions. They now live and work in Florida, where Tamir holds a position as a Visiting Assistant Professor at Florida State University in Tallahassee.

“It’s funny that our first collaboration came only after we had a baby together,” Tamir shared the day before the show’s opening. “You always hear about one artist in a couple having to stop working to support the other’s work, or manage a family… this was a way to support both our work,” added Zin.

Though there are natural benefits to a joint project between an artistic couple, the crux of the work lies beyond the logistical plusses. Over two weeks each artist will work independently at their station, for four to five hours a day. The rub is that the artists themselves are unaware of the result of their endeavors. “We haven’t really planned what is going to happen,” explained Zin. “Whatever is left in the space after the two weeks will be the physical remnant of the project.” 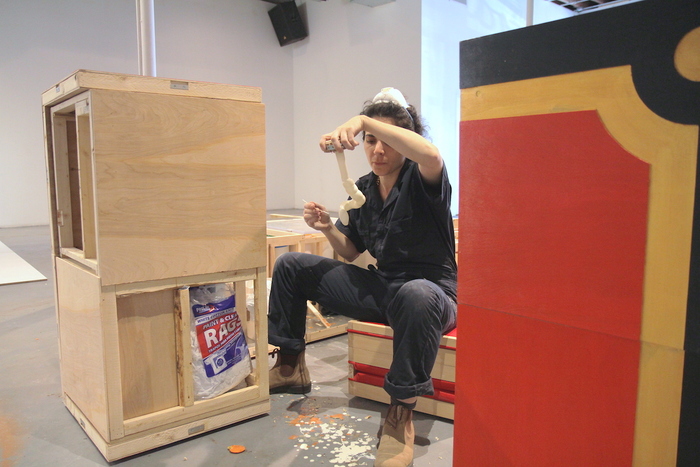 Will Tamir’s balloons gradually float down to the floor, getting caught in Zin’s sticky residue? How will these two self-contained operations meet, mingle, and interact? Those questions are left to time, chance, and hard work, in very much the same way an intimate relationship between two partners is often left to forces outside of their control.

But don’t let the couple’s blasé attitude towards the project’s material outcome fool you. Both artists have backgrounds in sculpture and installation, and place particular importance on the stability of the art object. For them the relationship between process and resultant object is imbued with meaning. The object serves as a remnant, artifact, or better yet, a footprint of the complex process that forged its existence. Whether the object can fully tell the story of the process is less important than eliciting inquiry from the viewer: What went on here? How did these materials come to be? These questions entice viewers to project causality unto the objects themselves, rendering Zin and Tamir’s process as a passive rather than active creative agent.

The piece takes its ideological bent from the work of philosopher Levi R. Bryant, who expounded on the relationships between humans and machines. Much like Marshall McLuhan’s theory that media are natural extensions of the human psyche or psychoanalytic concepts of inanimate objects as projections of the human body, Bryant believes that machines pick up where the human body leaves off, aiding in its functionality. Zin and Tamir share Bryant’s practical view of human-machine relations, a fairly atypical characterization and one that is often marked by a deep dystopian sensibility. 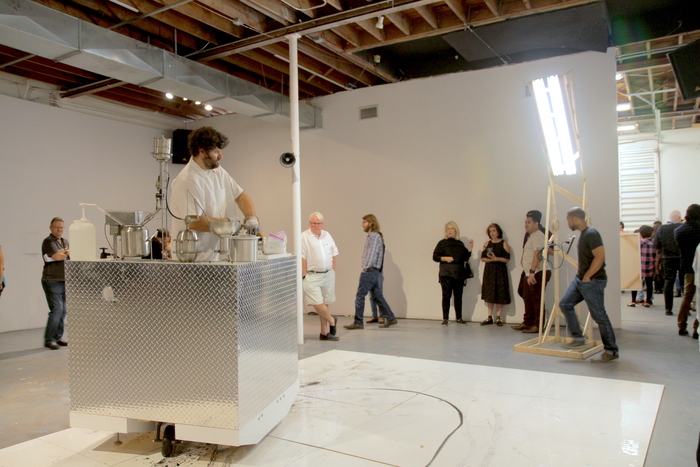 Perhaps the most unexpected implications of Larval Acceleration is its ambiguous stance towards the socio-political effects of industrial practice. Ostensibly the work is a bitter indictment of the monotony of industrial systems—generating work that is fundamentally unfulfilling for human beings—and the environmental effects of those same processes. The artists have even added an aural component to the piece: two different voice-overs are pumped into the gallery space as they work, recalling a radio played over a factory floor. The voice-overs tell tongue-in-cheek stories related to the respective products the two stations produce: the various sexual uses of lard and a cultural history of balloons.

It’s this same sense of humor the belies the work’s reactionary connotations, and the artists are also quick to downplay the reactionary elements. “It’s not really criticism of industry, because factories actually have to make something useful,” Tamir related. “We’re making objects for no useful reason… it’s more about the process.” 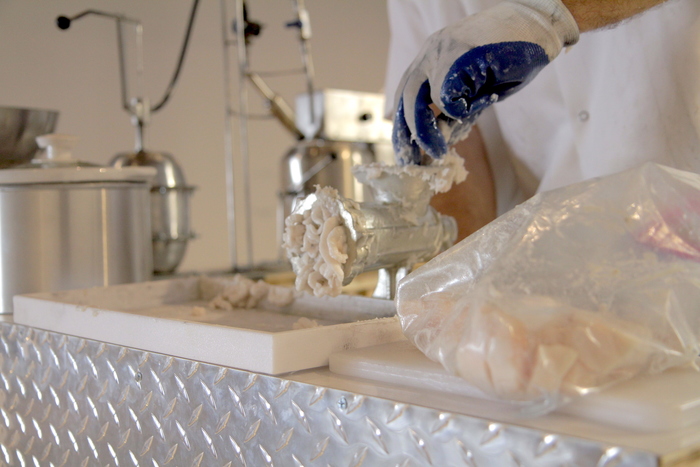 Still, that process is marked by overt references to industrial practices that increasingly bring our planet to the brink of environmental collapse. Indeed, it’s the industrial residue of each factory—deflated balloon casings and fatty sludge floor—promise to linger after the artists have closed up shop. Larval Acceleration’s environmental implications grow even more prescient in its South Florida setting. Low lying areas of Florida’s coast are particularly prone to some of the most pernicious effects of climate change, particularly sea-level rise. Local artists have drawn attention to the problem, lambasted climate-change deniers, and even offered solutions in their work.

For Zin and Tamir the question of how to combat environmental waste created by industry is more nuanced than outright deindustrialization. Their work points to the ambiguities of human-machine relationships. Machines at once add functionality and aid in creativity, while generating potential damaging and harmful consequences. How to mitigate the latter while expanding on the former is left up in the air, like a balloon before it falls.

Larval Acceleration: A Conversation in Chunks is currently on view through April 15 at Locust Projects, Miami.