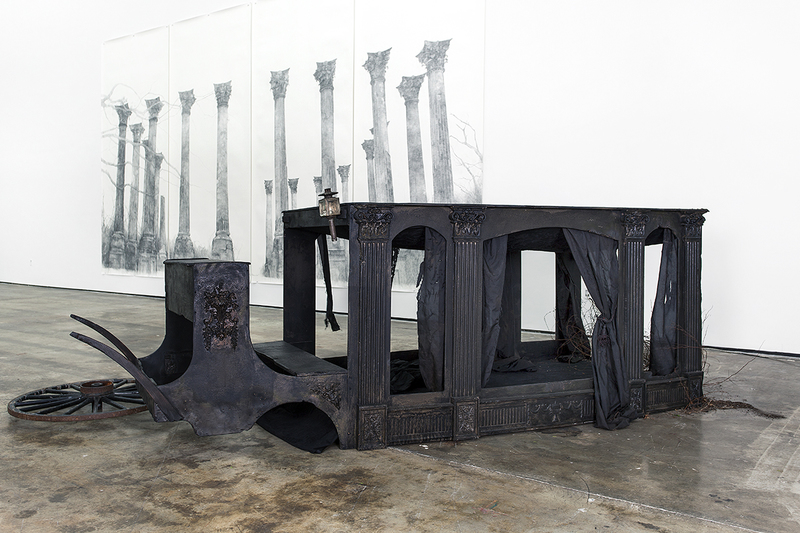 The Castle Dismal and the New Southern Gothic

Walking into Christina Pettersson’s current exhibition, The Castle Dismal, one is immediately struck by an unfamiliar smell of burnt wood and singed earth. The culprit is pine tar, an ancient Scandinavian preservative encasing the floor below a relief bust of famed opera singer Jenny Lind, also of Swedish descent, with her throat slashed. The sculpture is just one of many references to death, decay, and the deep folk traditions of the South known romantically as Southern Gothic.

The Castle Dismal is Pettersson’s first solo exhibition at Primary Projects' new downtown Miami location. The title is an homage to Nathaniel Hawthorne’s childhood home in Salem, Massachusetts, and just one of many references to American literary icons. The exhibition consists of three monumental works of graphite on paper—including the largest drawing of her career to date—three mixed media sculptures, and a roster of performances and events hosted by the artist and gallery over the course of the show’s duration.

The signature piece is unmistakably Pettersson’s installation, No Wealth, No Ruin, No Silver, No Gold, Nothing Satisfies Me but Your Soul (2014), a twelve foot funerary carriage that the artist painstakingly crafted by hand before distressing with a blowtorch. Its construction was inspired by similar models made by Merts & Riddle, a coach and hearse company with roots dating back to the 1860s. For Pettersson, the coach is symbolic of the journey that we all eventually take and is made for only one type of passenger (the dead kind). A sculpture of wrought iron gates and wax intestinal cords rest beside the carriage, again referencing the spiritual crossings over built with a penchant for tension and suspense.

The artist’s largest drawing to date, a tetraptych of Corinthian columns spanning thirteen feet high and twenty-four feet across hangs just behind the coach. The columns are those of the Windsor Plantation, a famous Mississippi relic known for its gargantuan columns (forty feet!) and tragic fiery demise. The plantation was the largest in the region and a testament to the Neoclassical architecture and empiricism of the colonial South. Pettersson’s rendition captures a particular corporeal void; its swayed branches reference the whistling wind tunnels, which were the reported namesake of the plantation. 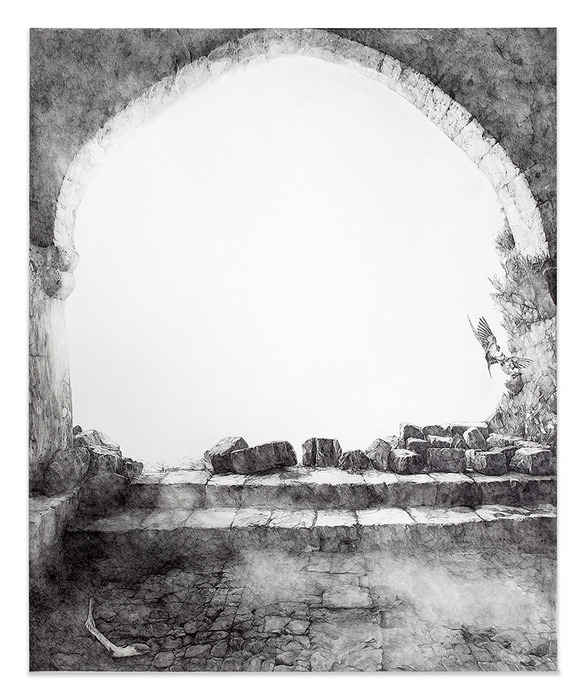 Christina Pettersson, Oh Lucius, This Gastly Flooring, It Wounds Me So, 2013, Graphite on paper, 48 x 72 inches; Photo by Zach Balber / Courtesy of the artist and Primary Projects

The exhibition continues with another large-scale drawing, Oh Lucius, This Gastly Flooring, It Wounds Me So (2013). This piece was the first of the series and was conceptualized while Pettersson was in residency (2012-2013) at The Deering Estate, a community based program dedicated to education, conservation, and historical restoration. The work references an old Spanish ruin and again signifies the notion of an archway or gateway to a passage unknown with our somatic limitations.

The final drawing is a detailed rendition of a Kudzu vine entitled His Own Name Startled Him, Flying Off the Faded Page Like a Medieval Moth Trapped in the Doomsday Book (2014). Kudzu was brought to the US in 1876 from Japan during the Centennial Exposition and quickly became an invasive species to the natural horticulture. Known as “the vine that eats the South,” the Kudzu is revered for its deadly beauty and carnivorous nature. With sweeping gesture, Pettersson drapes and swells the vine as it spindles its frenetic dance with a softness and grace.

The exhibition culminates in Primary’s Project Room, a 600 square foot installation space where Pettersson continues to play with ghostly references to the spiritual afterlife. Situated in an altar-like fashion, the artist suspends a miniature model of the SS Sultana, a Mississippi steamboat that exploded on April 27th, 1865. The greatest maritime disaster in US history, the event was overshadowed in the press due to the assassination of Abraham Lincoln days before. The reference is a staged conversation between the SS Sultana and Jenny Lind, who was made famous in the United States by P.T. Barnum for her cinematic overtures and maritime references. The room enables a séance-like experience where Lind’s ghost is called upon to resurrect the fallen Union soldiers whose untimely deaths were never given the full honor of commemoration. 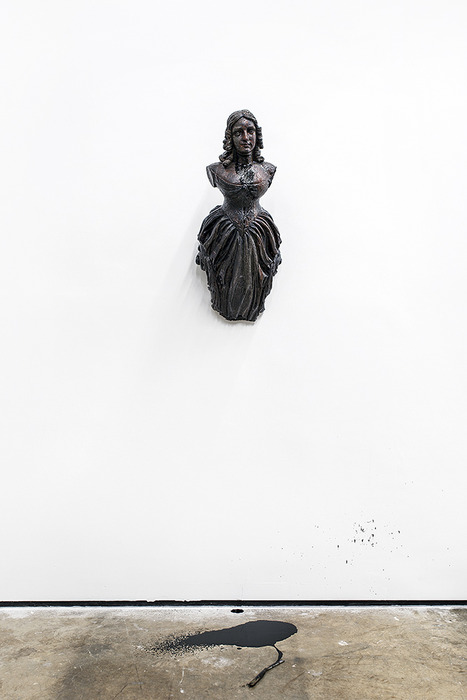 As if all that wasn’t enough, Pettersson and Primary Projects principal BooksIIII Bischof, as well as co-curators Cristina Gonzalez and Typoe, have extended the calendar to include an additional eight weeks of programming that run the gamut of artistic and civic engagement. Kicking off with BaynanzaBiscayne, a cleanup campaign of historic Virginia Key Bay, to The Feast of Species, a twenty-six guest dinner party in collaboration with Red Flag Magazine celebrating the good ole’ fashioned days of Southern Masquerade. Just as Pettersson constantly finds inspiration in her surroundings, the goal of this creative entourage is to activate the community through seeking inspiration in the local environment.

(Image on top: Christina Pettersson, No Wealth, No Ruin, No Silver, No Gold, Nothing Satisfies Me but Your Soul, 2014, Mixed media and wood, 151 x 47 x 49 inches; Photo by Zach Balber /Courtesy of the artist and Primary Projects)