And the Award Goes To...

All the world’s a stage and it’s not just the Oscars, but the contemporary art fairs of late, who are commanding it.   I, for one, have been a reluctant participant in this global drive for exposing contemporary art to the masses.  But thanks to Art Miami LLC and its director, Nick Korniloff, I too have become a member of the captivated audience of the art fair. Art Wynwood is its star and has given sunny Miami an event that lives up to the hype of its current art scene, one often written about but rarely experienced firsthand.

Without a doubt, Art Basel put Miami on the map and elevated the city from one of vacation destination to cultural hotspot; however, Art Basel and the infinite number of fairs it anchors, have become a firestorm of exhibitions that leave the visual senses wanting, not to mention bombarded, and the newly minted collector gasping for air.  Unfortunately Art Basel, the same event that catapulted Miami into the narrow spotlight of the art world, is now metaphoric for the very reputation that Miami has fought to escape, one of superficiality and excess.   Enter Art Wynwood. And here are some of the reasons it wowed.

First, there was consistent quality throughout the fair and regardless of the kind of art one prefers, Art Wynwood had it.  Galleries spanning the globe occupied the easily navigated space, and the significant number of local galleries chosen showed a variety of works easily on par with exhibitors from Manhattan’s Chelsea, as well as those from abroad. From a curatorial point of view, the amount of art and choice of works gave visitors an opportunity to fully digest the display and the ability to walk away with a grasp of the current mindset in contemporary art and the market. 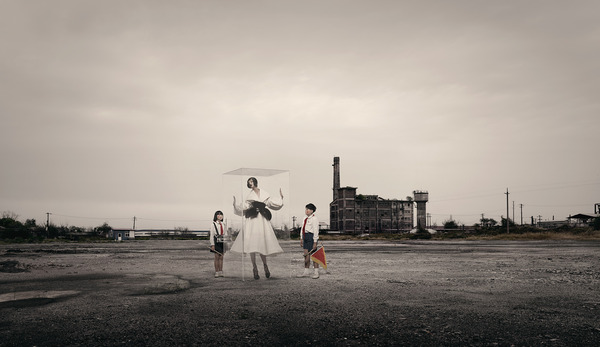 One Miami gallery worth mentioning is Art Lexing.  I was surprised to learn that Miami has a gallery specializing in emerging Asian artists, and this is one to note.  At the fair, Lexing featured works by photographer Quentin Shih from his Stranger in the glass box (2008) and Shangai dreamers (2010) series, which were commissioned by the French design house of Dior.  In these photos Shih forges images of Chinese society with fashion for the sake of political commentary.  What remains are exquisite renderings of pre-reform China infused with the dreamlike worlds of models and haute couture.

A show-stopping exhibit that was not to be missed was New York’s Claire Oliver Gallery.  If you haven’t seen the work of Norwood Brunner, take that short flight to New York and go directly to Claire’s Gallery.  Brunner’s mirrored pieces combine Swarovski crystal and glass allowing the viewer to reflect on his or her own image.  Phrases like “imagine you are flawless” and “a smooth sea never makes a skillful sailor” are central to the artist’s work and create an active cognitive relationship with the viewer, revealing the beautiful possibilities of life. If delving into the depths of psychology is a bit much, these works still have something to offer.  They are nothing short of gorgeous to behold, not to mention an added bonus of visual decadence while admiring oneself.

Without a doubt, one of the most impressive exhibitors was Victori Contemporary, a virtual gallery whose owners utilize fairs to further expose their artists to the market. Based out of New York, directors Ed Victori and John Haas clearly have a knack for choosing unrecognized, gifted artists with the credentials to back up their talents.  According to the gallery’s mission: “In the age of technology where overnight fame for talentless actions is commonplace, it becomes increasingly unfortunate to discover true artistic talents tucked away in the studios and corners of the world…” Gentlemen, I couldn’t agree more, and Victori Contemporary is a great example of what the general public and the art market are starved for, visual works with a clean esthetic that awaken the senses and ignite inner dialogue and conversation. 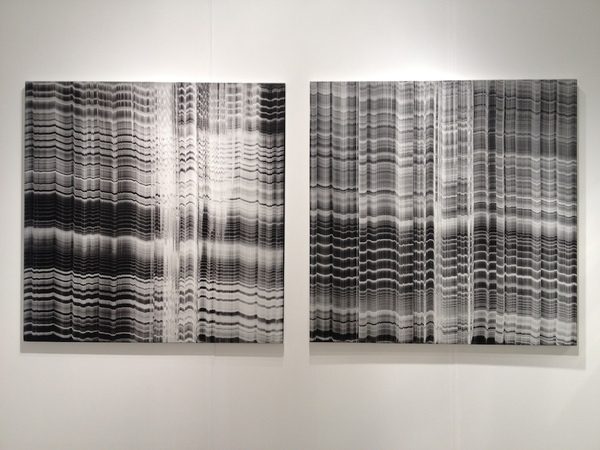 A diptych on display by Victori’s Miriam Cabessa, Black and White 1 (2008) and Black and White 3 (2008), two oil on linen created by the fluid and rhythmic movements of Cabessa’s body, left me breathless.  The renderings result in vacillating forms that flow forth from the static picture plane. The abstractions present themselves in waves and can be seen as anything from fabric to seismic recordings.  The work of Gerhard Richter might be comparative, but even Richter’s omnipotent works don’t possess the meditative power of the symphonic vibrations created by Cabessa.  As a collector it’s also worth noting that this artist was chosen to represent Israel in the Venice Biennale and is still virtually unknown.

Yet another reason Art Wynwood hit the mark was the attention it gave to local graffiti art and the legacy of Tony Goldman and his Wynwood Walls.   Artists such as Ron English, RETNA, and Kenny Scharf were given a specially curated exhibit that weaved throughout the remainder of the fair.  The graffiti and street art of Miami is some of its most powerful and have made it a formidable force within the international artistic community.  Once seen as art that fell outside of the coveted category of fine, this edgy, smart, and thought-provoking work often forces the viewer to reflect upon life and societal concerns and is now being seen in well-respected collections and museums.

Consider one of the major shows given by controversial director, creative genius, and entrepreneurial superstar Jeffrey Deitch at the Museum of Contemporary Art, Los Angeles.  “Art in the Streets” from 2011 was the museum’s most attended show in history and more than a third of the Wynwood Walls artists were featured.  Art Wynwood is proof that, like the separation between street and fine art, the line drawn between art and daily life is constantly being blurred.  Art is ever more accessible and resists containment.  And if the air of Art Wynwood is any example, even gallerists have fallen suit. Once unapproachable and opaque, these highly knowledgeable gatekeepers were friendly, open, and eager to share their talented artists with the world.  Thank you Art Miami LLC and Mr. Korniloff because the world is ready.

To read more stories like this one, go to www.seanicahowe.com!