Ted Vasin, the Russian-born psychedelic artist known for his meticulously drawn, dark psychedelic works is returning to Miami for a month-long exhibit of his latest work. “Poison Bliss” is the just-completed collection he began in 2009, and will be showcased at 101/exhibit in Miami from April 14 to June 6, 2012.

Meticulous in realism yet beautifully unsettling, Vasin’s work evokes the isolation of a dark, drug-induced hallucination, and frequently pairs drawings of detailed environments with shocking hues and metallic paints.

“Poison Bliss” continues Vasin’s tradition of using large-scale canvases to capture his truly exceptional drawing abilities, incorporating twisted iconography, hallucinations and an uncomfortably skewed vantage point. This series evokes the isolation of a man hypnotized by the psychedelic invasion of his body and the world around him, and his violent reaction to the perceived threat. Vasin will appear in person at the April 14th opening to discuss his work, accompanied by his signature electronic music. 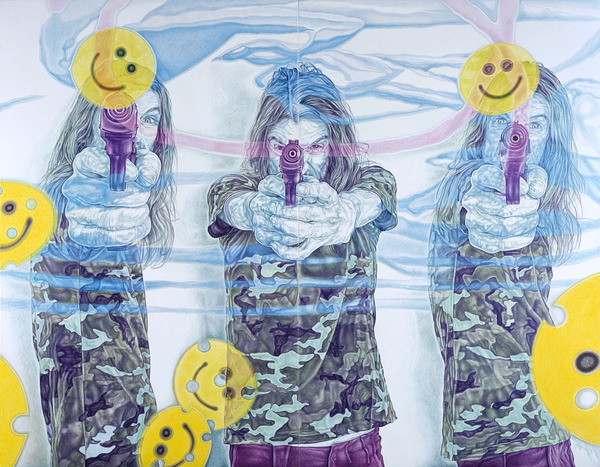 "Accuse Vasin of paint-by-number pictures with limping vitals, but at its best his work induces a kind of superflat vertigo, as if Murakami and Rosenquist works blew up on canvas, then the canvas followed suit. His use of negative space is pocked with brilliant description, and opaque shapes joust for attention with the translucent rings and ribs. Applause is extended for his refreshing lack of irony; if any statement is being made, it’s in the gesture of creating." (read more)

San Francisco-based artist Ted Vasin creates a wide range of works, often bound by their digital origins, presented as painting or as sound.

Vasin was born in Russia and currently lives and works in San Francisco. The artist has exhibited internationally including shows at the 101/exhibit, Limn Art Gallery, Davis Art Center, artMRKT Hamptons, Frey Norris Gallery, Tarryn Teresa Gallery, Sotheby’s New York, Tel Aviv and Amsterdam, Stanford Art Spaces and more. Vasin participated in two residencies through programs at the Fine Arts Museums of San Francisco, exhibiting at the Palace of the Legion of Honor and the De Young Art Center. In 2006 Vasin was a recipient of the Pollock-Krasner Foundation Grant. His work has been reviewed by the ArtWeek, San Francisco Chronicle, ArtSlant and has been featured in the American Art Collector, New American Paintings, Fashion Week Magazine, Wired Magazine as well as online in Juxtapoz, Hi-Fructoze and Beautiful/Decay.

Posted by Abhilasha Singh on 4/11/12
RELATED ARTICLES
COMMENTS (0)
ArtSlant has shutdown. The website is currently running in a view-only mode to allow archiving of the content.