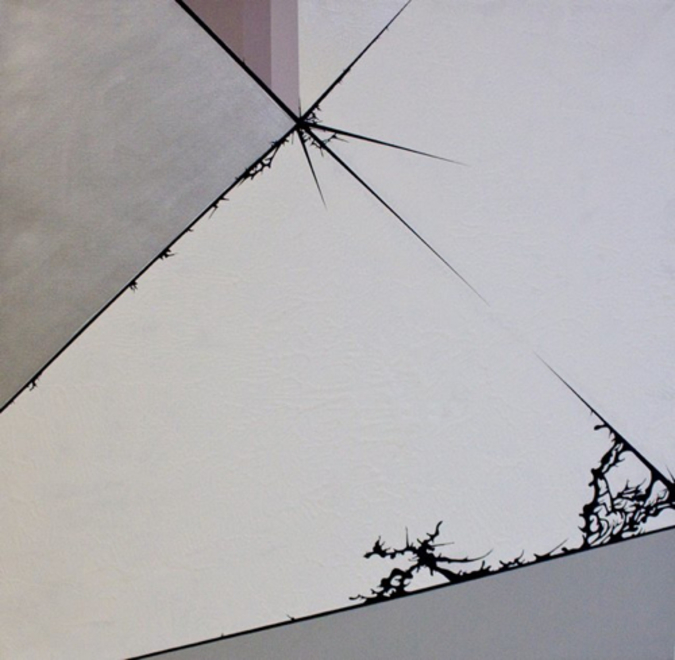 Julie Davidow is no stranger to ArtSlant. In 2009 she was the Grand Prize winner of the Golden Frame/Showcase Series (now officially known as the ArtSlant Prize). She won $5000 cash and a show at the Fountain Art Fair in NYC.

“Architectonics,” her new solo exhibition that just opened at Diana Lowenstein Gallery, reflects her signature style – a juxtaposition of measurable geometries and organic lines on flat surfaces.  The title of the show refers to her deep interest in the formalism of Deconstructivist architecture, and she has paired this new subject of her affection with a fresh palette.

Davidow starts with a sample photograph of the subject, but her paintings are not contingent on the source. They appear as independent fields with their own sense of space. Her lines are diagrammatic while distorting past notions of linear perspective. The artist investigates space using rudimentary elements, yet imbues the canvases with a layer of subtext and content beyond pure form. Organic cellular aberrations appear along delineations as references to the organic body. They are root-like and resemble a nervous system that follows the distinctive paths of an implied network matrix. Unlike the predictability of a symmetrical grid, her compositions achieve a dynamic sense of balance within a tightly woven structure. 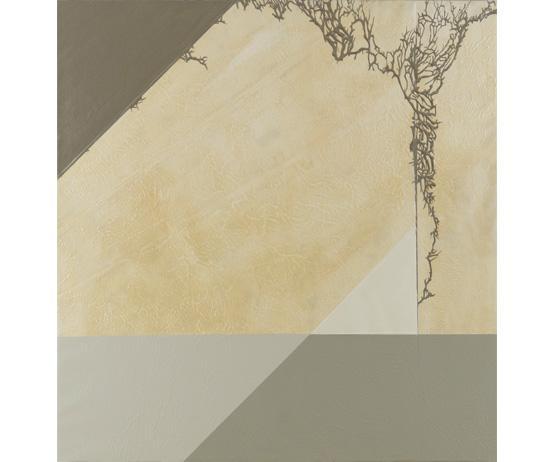 The color palette is soft with metallic layers of opalescence painted on fields of white. The contour lines are bold, contrasting blacks that rise to the surface of the picture plane and recede into deep pictorial space. This “push and pull” dynamism and manipulation of spatial perception are essential qualities in buildings designed by contemporary architects like Daniel Libeskind and Santiago Calatrava. Architecture that has been categorized as “Deconstructivist” breaks away from modernist ideas of pure form, or the notion that form should follow function, resulting in buildings often characterized by a sense of controlled chaos. Their shapes are distorted Pythagorean theorems frozen in motion. The movement is often expressive and organic, balancing structure with emotional dynamism.

Davidow has adopted a similar approach to the subjects in her paintings. To produce “Architectonics,” Davidow specifically researched art museums that were built in the Deconstructivist style. She started looking at the “museum as a monument” and considering how and where art is “enshrined.” She analyzes and extracts the essential geometries from each building while imbuing those traces with a sensation of the organic, the living, and the biological.

Although her works are primarily formal, they map spaces that are particularly loaded and in the process of mapping, the original is lost to vague appearances of itself. Much like a memory, the monument is folded into the past of the object, literally, as an effect of the process of bending and unbending the canvas. She states that “each space has a rhythm” and she is “trying to get a sense of what that is through painting.”

At the Guggenheim, Artists Enlist Architecture to Subvert and Expand Histories
8/11/16

Wednesday Web Artist of the Week: Sabrina Ratté
6/29/16
COMMENTS (0)
ArtSlant has shutdown. The website is currently running in a view-only mode to allow archiving of the content.