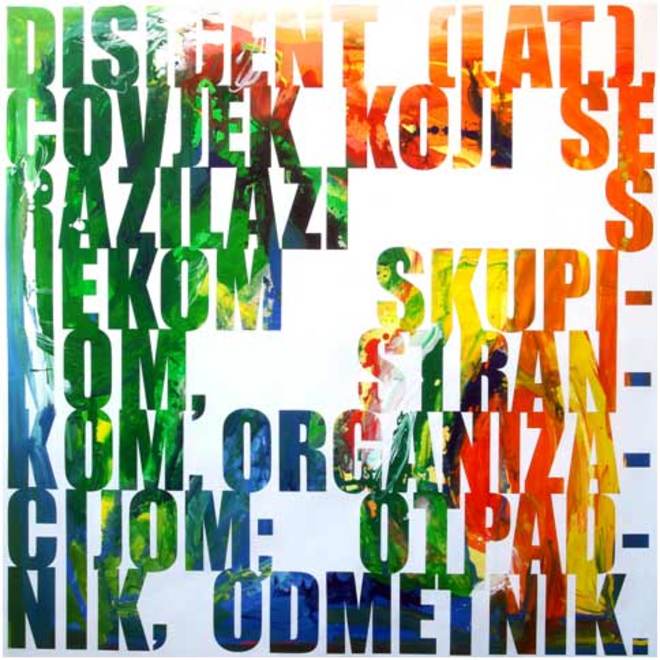 To be a dissident in an authoritarian one-party state such as Cuba is no small thing: it takes great courage and conviction. Similarly, to be an artist living in Cuba and to make work that focuses directly on the themes of dissidence and exile—that also takes courage, as well as creativity. José Angel Vincench is just such an artist, as this outstanding solo exhibition—his first in the U.S.—ably demonstrates.

It bears mentioning that I myself am the son of a Cuban exile, so these issues, which are personal to Vincench, are also personal for me.

Upon entering the gallery, one is greeted by two pieces which face each other on opposite walls. Both are comprised of a series of canvas tote bags whose front panels, when viewed together, form elongated Cuban flags. Each bag has been shaped into a different letter: in one piece they spell the English word "EXILE" while in the other they spell "DESTIERRO," the Spanish equivalent. All the bags appear to be empty, which is fitting when one considers that Cubans, when fleeing into exile, have generally not been allowed to take much, if any, personal property with them.

These introductory works set the tone for the rest of the show, in which Vincench uses words and their translations not simply as subjects, but also as metaphors for dialogue and discourse, argument and dissent. In a pair of related pieces, the words "EXILE" and "DESTIERRO" are made out of brown paper bags. In another piece, Vincench uses black tote bags to spell out the word "EXILE." The solid black color gives the latter work an ominous look; the letter "L" in particular looks like a boot—perhaps that of a soldier or police officer.

Two non-text pieces also convey the idea of exile from Cuba. In one a solid black shoulder tote bag has been altered to approximate the shape of the island. In another a clear plastic shoulder tote, also in the shape of the island, has been filled with earth—a grittily appropriate symbol of the Cuban exile's strong attachment to the homeland, which s/he carries within, even as s/he leaves it behind.

The centerpiece of the exhibition is an impressive series of fourteen large acrylic paintings, each 48" square and each containing the word "dissident" along with its dictionary definition or translation in a different language. Vincench's technique in this series is integral to its concept. He first creates a beautiful abstract painting, using brushstrokes, drips, and/or splashes of color. Then he lays down stencils of the letters, and paints the negative space around them a uniform white. The white paint serves as a kind of censoring white-out, blocking a full view of the abstract underpainting—although in many cases a pale version of it can still be seen—while at the same time providing crisp edges that allow the colorful text to become more or less legible. The tension between the positive and negative space echoes the tension between the dissident and the system against which s/he rebels. While obviously stemming from a personal interest in the especially unhappy fate of dissidents in Cuba, the variety of languages that are represented reminds us that dissenters play an important role in all societies.

Vincench uses the same white-out technique in his Exilio series, which consists of twenty small canvases arranged in a grid on the wall. Half of them contain the English word "exile" and its Spanish translations, while the other half have the Spanish term "exilio" along with an English definition—"somebody living outside own country." These paintings have a similar kind of tension as the "dissident" paintings. However, in this case the focus is on the tense relationship between Cubans living on the island and those who live in exile in the U.S.

An even stronger statement is made by the series Cuba y la Noche [Cuba and the Night], consisting of 100 small canvases, each 8" square, arranged in five long rows on the wall. Each of these paintings has a unique, colorful underpainting—just as in the "dissident" and "exilio" series—and each has letters that are defined by the negative space around them. However in this case that negative space, instead of being white, is an obliterating black, reminiscent of sensitive documents that have been redacted or censored by an oppressive government. Repetition is used to powerful effect here, with all 100 of these paintings containing the same Spanish text: "DISIDENTE ADJ. Y N. M. Y F. QUE SE SEPARA DE UNA DOCTRINA, CREENCIA O PARTIDO" [Dissident, adjective & noun, masculine & feminine, one that separates from a doctrine, belief, or political party].

Bringing together the intertwined themes of dissidence and exile, Vincench's Reconciliation Tree sounds a more hopeful note. It consists of strips of wood that have been incised with text on both sides, and attached at various angles to a vertical pole, roughly in the form of a Christmas tree. If you stand in a certain position you can read the complete dictionary definitions of the word "Reconciliation" in English. Stand on the other side and you can read the Spanish definitions of "Reconciliación." Yet no matter where you stand, sitting at the apex of the tree is a single, unvarnished star, recalling the single white star in the Cuban flag—the national flag that is beloved by all Cubans, no matter where they live and no matter what their ideology. 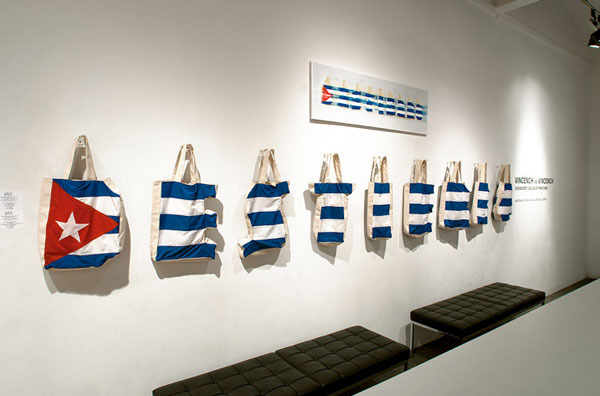 Posted by Eduardo Alexander Rabel on 2/6/12
RELATED ARTICLES
COMMENTS (0)
ArtSlant has shutdown. The website is currently running in a view-only mode to allow archiving of the content.