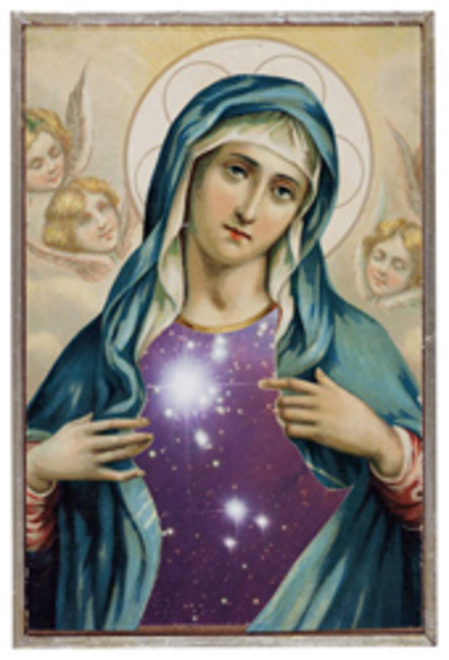 Space Is the Place

From the Press Release:

Gavlak is pleased to announce two solo exhibitions by Aleksandra Mir (b. 1967, Poland) and Mungo Thomson (b. 1969, California). While both artists work across a variety of mediums and concepts, the two bodies of work on view continue their ongoing interest and exploration of space-related themes.

For her second solo exhibition at Gavlak, Aleksandra Mir presents a series of collages made while living in Palermo, Italy. Combining religious iconography with images of space travel, Mir asks, "If angels and astronauts share the same sky, isn't it time they were introduced?" Her stunning hand-cut collages with gorgeous gold leaf frames ponder the intersection of religion and science as much as their differences. As stated by Mark Baker in literature for her exhibition The Dream and the Promise, "Religion was science as science is now religion. The justification of our lust and thrust for the infinite, away from our sensory paradise, comparable to the search for the deepest recesses of our minds, are both ways of seeking the answers to creation, purpose and demise."

For his first solo exhibition at Gavlak, Mungo Thomson expands on ideas first explored in his Negative Space project, an ongoing series of edge-to-edge photographic wall murals which invert the contents of images taken from the Hubble Space Telescope's online archive, with a new series of silkscreen prints. These prints use glow-in-the-dark ink to produce images of starscapes based on photos taken by amateur astronomers found online. Thomson replaces the photographic image with vector graphics that recall the do-it-yourself glow-in-the-dark sticker starscapes of childhood, but the logic is reversed: in Thomson's images it is empty space that glows when the lights turn off, not the stars. The result is a nearly invisible image of a night sky in negative that reveals itself when the lights are turned off and the gallery is closed. In this way, like much of Thomson's work, they subvert – or invert – the exhibition itself.

Mungo Thomson has had solo exhibitions at the Hammer Museum, Los Angeles, The Kadist Art Foundation, Paris, and GAMeC, Bergamo, Italy. Recent group exhibitions include the 2008 Whitney Biennial Exhibition at the Whitney Museum of American Art, New York, The Cinema Effect at the Hirshhorn Museum in Washington, D.C., The Possibility of an Island at the Museum of Contemporary Art, North Miami, The 8th Panama Biennial in Panama City, Panama, Nothingness and Being at Collecion Jumex, Mexico City, Mexico, and Compilation IV at Kunsthalle Dusseldorf, Dusseldorf, Germany. In 2010 Thomson will exhibit at the Olympic Sculpture Park, Seattle, Washington, The Los Angeles County Museum of Art, Los Angeles, and Castello di Rivoli, Torino, Italy.