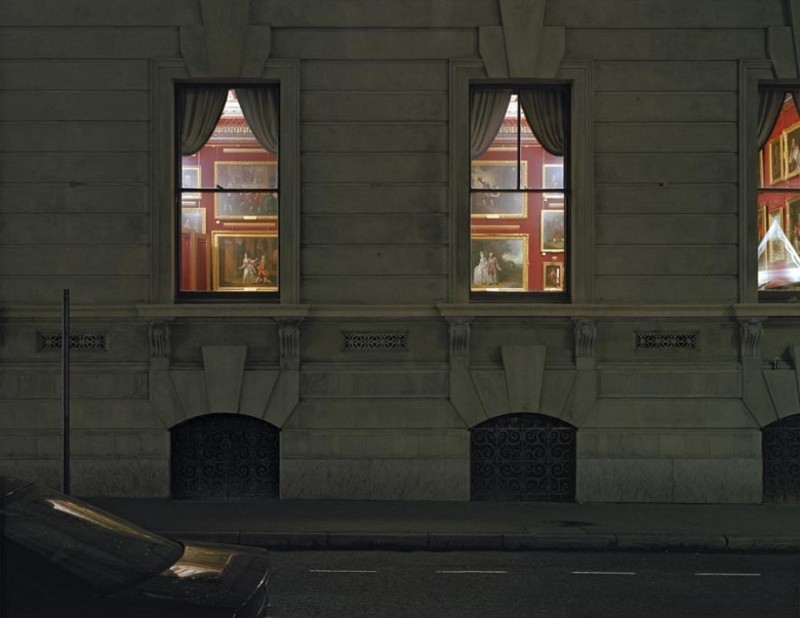 ‘I hope that we occasionally can see them; the solid constructions that surround us,  that we can defeat our expectations and leave behind the pessimism that says all worlds will look and feel the same.’ -John Riddy

The fourth exhibition of photographs by John Riddy takes a deceptively subdued look at the London landscape. Riddy makes a quiet journey around the urban sprawl recording a wide range of subjects from council estates to institutions such as the Bank of England, with settings punctuated by the flat dark expanse of the river Thames. The mystery is in the detail, for instance ‘London (Burgess Park)' takes in an apparently mundane courtyard of tower blocks, in a composition that brings forward their sculptural identity; the black guard rails on balconies combine with inserts of yellow glass and red brick sections to recall a Mondrian abstract relief. There are also views of upper establishments; 'London (Garrick)' where 18th century paintings of the actor and his stage are spied from a darkened street through illuminated  windows of the Garrick Club in Mayfair.

Elsewhere statues and ornamental embellishment gain a ghostly presence, 'London (Westminster)' records the broad arched door of the Cathedral; its black studded frame and relief of sculpted figures offset by the black tarmac and stark white chevrons of road markings.

The artist’s excursions lead him to the night-lit location of Limehouse, where he focuses on a broad webbed winter tree, its stripped branches drawing a complex web against the night sky. Elsewhere his attention is caught by a corroded wall, 'London, Wapping', where patterns of peeling white paint give way to mouldering red brick, urging feelings of communal memory and the infinite stories lost to history. The suite is displayed in a sequence of untitled frames, and employs the broad exhibition space to make a quiet but memorable commentary of engaging potency.