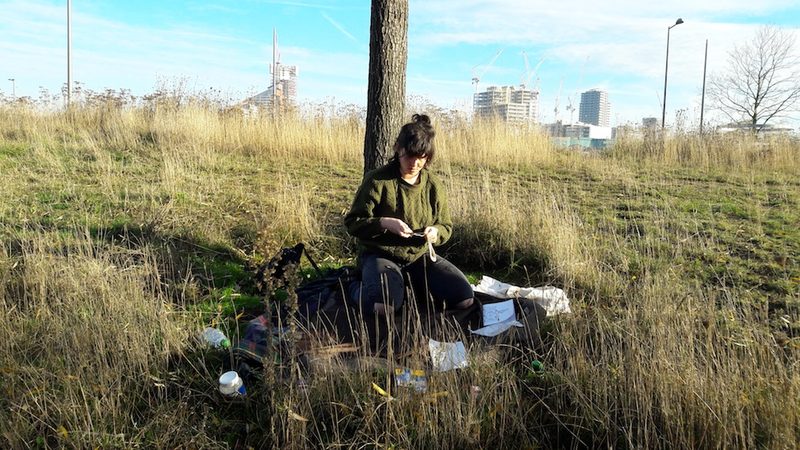 It’s a decidedly vulnerable act many of us have experienced: the frantic search for something in your bag, bent over or on your knees in airport or a train station, personal articles spread out around you as you hunt for missing keys or passport, maybe trying to keep certain items hidden—tampons, condoms, echoes of bodies and sexuality deemed too personal for public exposure.

Berlin-based artist Tanja Ostojić’s ongoing project Misplaced Women?, first performed in Zagreb in 2009, centers on a simple but familiar choreography Ostojić both undertakes herself and delegates to other performers: the careful unpacking and repacking of a bag, the turning inside-out of things, in public spaces. Often performed by Ostojić or her delegates in sites of transit—airports, train terminals, bus stops—the performances sometimes take place without audiences, though just as often as not, they occur under the suspicious gaze of security personnel. Misplaced Women? evokes not only the physical borders suggested by her chosen sites, but the borders between the personal and the public these moments expose. 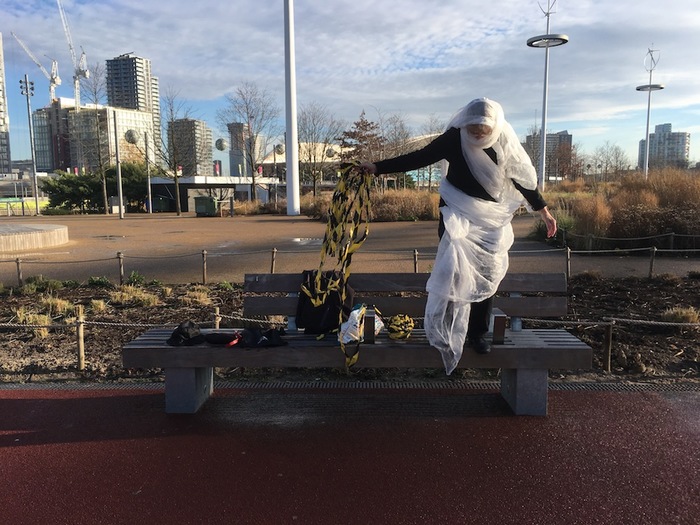 Anyone who re-performs the project can submit to an archive of stories and images. Additionally, Ostojić holds workshops and invites individual artists to perform the piece or to expand on its score. Its most recent iteration took place last month, not in a liminal site of transit, but in a neighborhood in the throes of transformation. Invited by artist Elena Marchevska, Ostojić hosted a two-day workshop at the current home of Live Art Development Agency (LADA), in the East London neighborhood of Hackney Wick. Marchevska was undertaking a residency with LADA’s Restock, Rethink, Reflect (RRR) project, an ongoing initiative to support artists engaging with issues of identity politics and cultural diversity. Over the last decade residency themes have included race, disability, and feminism; RRR’s fourth iteration, which runs through 2018, is specifically focused on questions of privilege.

As an academic researcher and artist, Marchevska focuses on questions of displacement, considering feminist and artistic interventions as strategies of “hospitality.” She had invited Ostojić and fifteen participants of the Misplaced Women Workshop to the once “edgy” Hackney Wick for two days to take on the surrounding neighborhood as a laboratory in which to research and perform. Until the 2012 Olympic Games in London, Hackney Wick was a former industrial neighborhood of food packers and factories, increasingly populated by affordable art studios, venues, and fabrication labs. Preparation for the 2012 Games saw the construction of massive stadiums and parks in the area, followed by the sudden explosion of condo complexes, the enormous Stratford Westfield shopping mall, and awkward landscaping attempts to turn the Olympic site into “useable” parks. Along with physical changes came increased rents and the inevitable loss of arts spaces, including the important venue ]performance s p a c e [, which moved to Folkestone following complaints from residents of newly built condominium complexes. 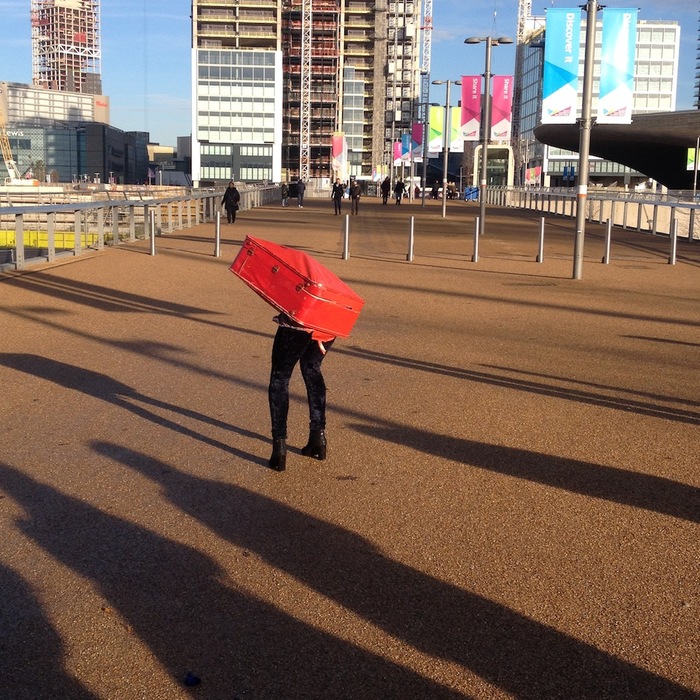 As workshop participants unpacked and repacked their bags throughout this transformed, and transforming, neighborhood, their actions engaged and pointed to the all too common predicament of Olympic legacy neighborhoods and gentrification in general. They enacted Ostojić’s basic score in posh shopping malls full of fake snow and foliage for the holiday season; they performed in children’s playgrounds surrounded by unfinished development projects and the sounds of construction—and, notably, no actual children, despite the oddly temperate December weather.

These generic pseudo-public spaces and the vestiges of old Hackney Wick became the backdrops and contexts for reiterations of Ostojić’s performance encompassing both personal and more pointedly geo-political critiques. Among the fifteen participants selected by Ostojić and Marchevska from an open call were practicing artists, architects, journalists, activists, and volunteers concerned with displacement.

In one performance, UK-based, Polish-born artist Dagmara Bilon, whose practice draws on her own experiences of migration, motherhood, and art-making, unpacked a red vintage suitcase and distributed the artifacts of her own past performances—costumes, personal objects, and large papier-mâché “pussy”—to participants and audience members to carry. She then stepped into two leg holes cut into the suitcase, zipped herself inside and, blinded and in high-healed shoes, tentatively crossed the bridge to the entrance of the Westfield shopping center. A procession of objects and onlookers followed in her wake. The piece was met with varied responses of delight and bemusement by shoppers (and suspicion by a golf-cart-driving security guard). 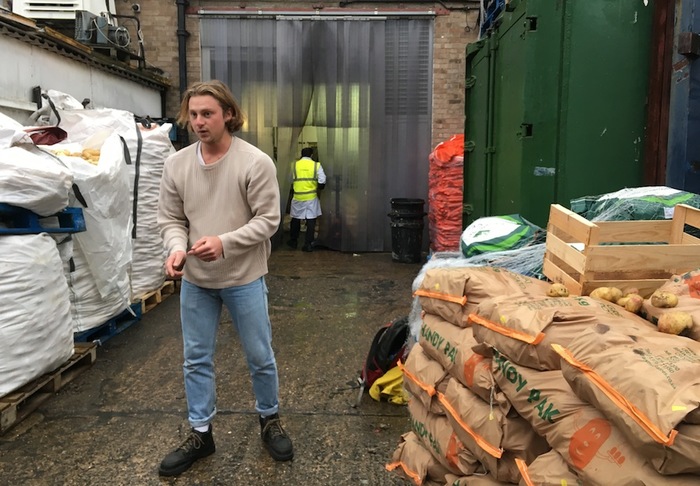 Nick Harris’ performance, a mimed unpacking, recreated the work he does with children as a clown in refugee camps in Europe, including the former “Jungle” in Calais. His performance, which is initiated by a loud call of “Dayira!” or “circle” in Arabic, used to create an impromptu space in the camps, drew the attention of some workers in a food shipping business opposite the former home of ]performance s p a c e [, who came from behind a refrigerator curtain to watch.

Teresa Albor, an American artist and journalist based in London, carried with her a selection of personal effects from The Things We Leave Behind, a collaborative project with photographer Lais Pontes. The project creates photographic archives of lost or abandoned objects collected through their work with The Dirty Girls of Lesvos Island, an organization which collects, washes, and redistributes discarded clothing from asylum seekers arriving on the beaches of Lesbos, Greece. These items, including now-useless money from people’s departure countries, family photographs, and once valued religious objects, lost or left in transit, were unpacked and carefully repacked under the watchful eyes of security guards and holiday shoppers in a temporary Christmas village in the mall, and again in the old Hackney Wick packing yards.

These varied interpretations of and engagements with the notion of “dis/misplacement” arise from both Ostojić’s commitment to Misplaced Women? as a locus for discussion and experience, as well as from Elena Marchevska’s investment in the feminist politics of the notion of “hospitality.” In a truly collaborative turn, both artists left the determinations of each performance to its participants. The workshop was, thus, a kind of nesting doll of various iterations of sharing space and stories; each participant’s work was forged within Ostojić’s archive, within Marchevska’s residency, harkening as much to histories of activist consciousness-raising circles as to an arts workshop. LADA, which is itself currently threatened with relocation from Hackney Wick, also acts more as a hosting institution than a traditional gallery or performance venue, helping to support and foster new works and building archives of underrepresented projects and artists who work in live arts. 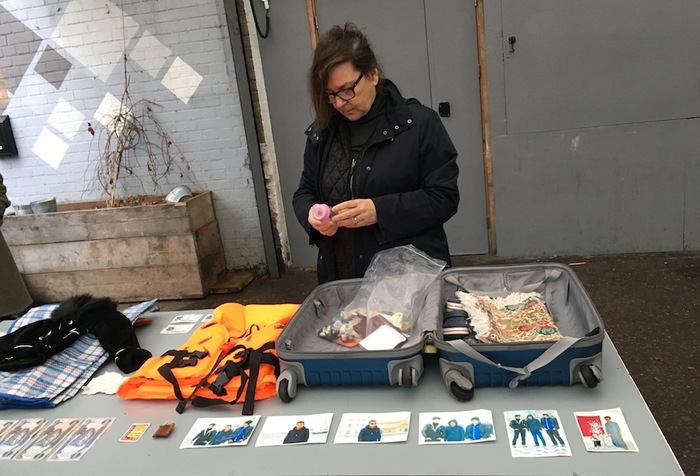 Large-scale geopolitical displacements have been the subject for many artworks in the past year, some of them extraordinarily visible and well funded. High-profile artworks, like Ai Weiwei’s life jacket installations in Berlin and Vienna, often attempt to represent the issue though monumental scale. But the Misplaced Women? project and its participants engage with mis- and displacement on an intimate level. Their performances draw from individual migration stories, as well as embodied experiences such as ageing, motherhood, and illness. The performers’ unpackings thus resonate on a personal scale as much as they reflect the local site of a gentrifying neighborhood and open onto urgent, broader themes of geopolitical mass displacements. Collectively, these projects work to connect separately understood questions of borders and their crossings. Through a seemingly small, quotidian gesture—the opening up of a tiny, personal space in public—Misplaced Women? grapples with how, in turn, borders redrawn by economic and geopolitical forces themselves traverse our bodies and spaces. 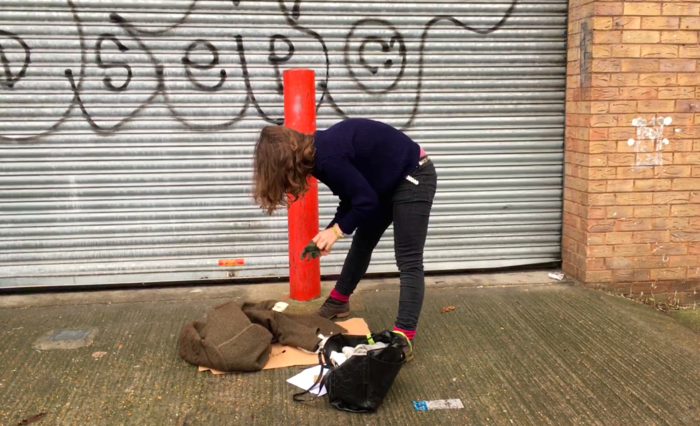 As part of her ongoing research residency at LADA, Elena Marchevska is inviting artist contributions on the subject of displacement through January 20, 2017.

Tanja Ostojić accepts submissions to her Misplaced Women? website, an ongoing archive of personal experiences with recreations of the project.

Danyel M. Ferrari is an artist and independent researcher currently based in Istanbul, Turkey.