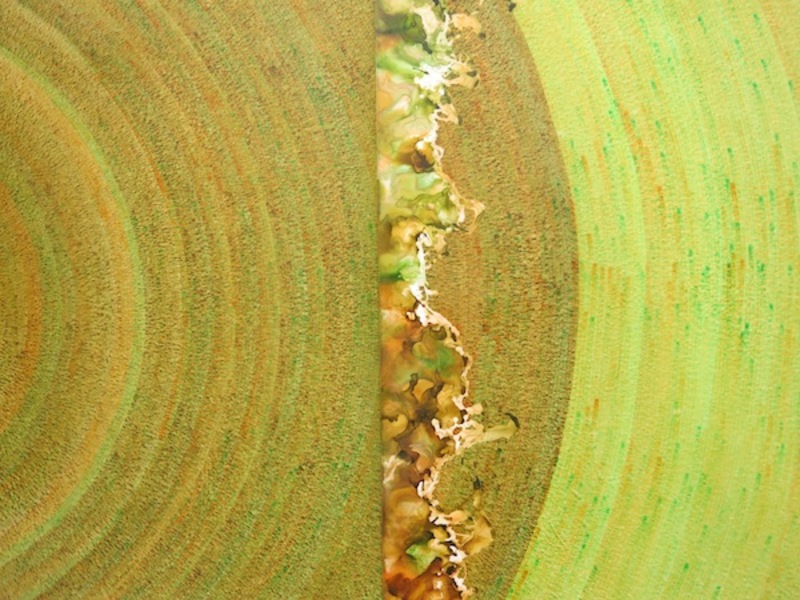 Looking for the Future at Frieze London

Looking around an art fair with a fixed criteria is an amazing thing. I’d recommend it to any visitor as a tool to cut through the vast amount of work that will pass in front of their eyes. It doesn’t have to be fancy or intelligent. It can be as simple as “I’m only looking for blue,” or “ceramics,” or “a piece of work that I would hang above the fireplace.” In all instances it forms connections between works that wouldn’t otherwise be connected, and makes viewing the fair active rather than passive, less monotonous and less tiring.

My personal criteria this year was to look for work that was ultra modern: by this I mean absolutely now, not five years ago, not post-millennial, but right this second. Of course a kind of absurd thing to do, but also if you can’t do it at an art fair where can you? The genesis of the idea came from a show by Jonathan Zawada that was at Beers gallery in East London a few weeks ago.

Zawada is an LA-based Australian-born artist who creates wall pieces and sculptures based on mathematical and cryptogramic functions. Sounds wild. And it is actually wild. The painting/sculpture/thing on the wall pieces he does, where he stretches a mesh over a lazer-cut background, look like OpArt on steroids, the surface of the work shifting and spiralling and making it difficult to look directly at it. Which is of course a wonderful thing. 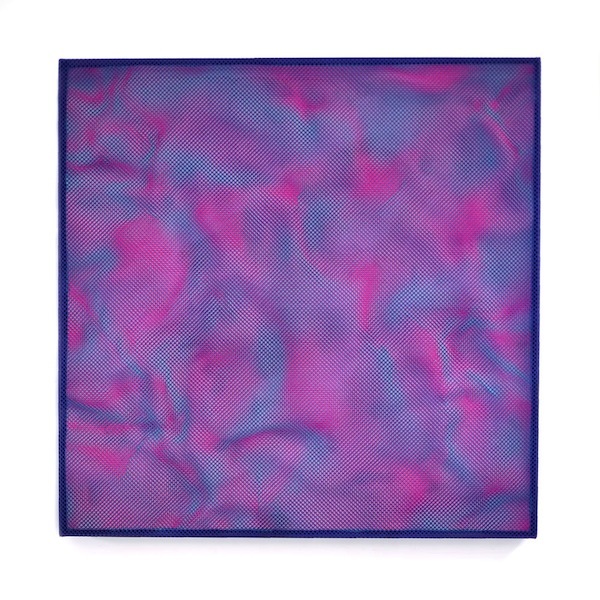 In a weird way they look like the future; but I’ll come back to this.

I wanted to find pieces that wouldn’t have been able to be created fifteen or maybe even ten years ago because you wouldn’t have access to either the laser cutting technology nor the computer power required to make it. But there’s also something about the color here. The two colors you see above, one the color of the mesh, the other the color of the background (it’s the interplay between the two that produces the powerful OpArt effect), have something particularly modern about them. To quote the German artist Elisabeth Reupold, “Neons are the only truly modern colors.” When I first heard this statement a puritanical part of me was offended, as I basically thought these colors were naff. Now I’m not so sure.

I am sure, however, that there are probably important distinctions between these three: neon, day-glo, and fluorescent—but that’s not so important to me for the purposes of this piece. Here, we might just call them Lurid Modern Hues (LMH’s).

The second contributing factor to this article was that the first thing I did on getting into Frieze—and perhaps the highlight—which was to attend a talk with Douglas Coupland and Emily Segal (of trend-predicting artist’s group K-Hole, associated with coining the term "normcore"). I highly recommend you listen to it if you have the time. Not least because (as I mentioned on Twitter) Emily Segal came across as impressively smart and switched on and funny and personable, so much so I started to feel sorry for poor old Coupland.

The talk was about predicting the future, but as Segal says, “[The] future is a way to talk about the present with more credibility.” So when I say Zawada’s work looks like the future, perhaps what I mean is that they look like now. So finally, the three factors that I used to look for work around the Frieze were modern techniques, modern colors, and me perceiving them as modern. What this meant in practice was that if I could immediately reference it to something, say, “it’s a bit like…” or “it references…” then it was out. Here are the examples. 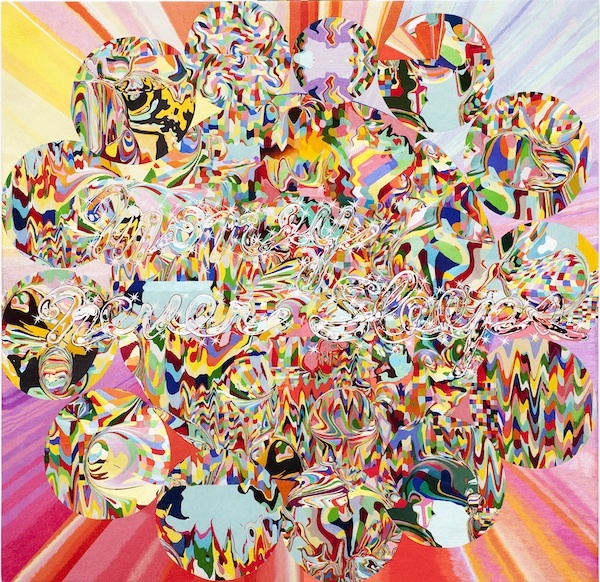 This picture, Money Never Sleeps, by Kyungah Ham, was the first to absolutely launch itself right off the wall and in my direction. The descriptions read “North Korean hand embroidery, silk threads on cotton, middle man, anxiety, censorship, wooden frame, approx. 1200hrs/2 persons.” Between the popping colors, the incredible convolutions, the overlaid message, and circumstances under which it was produced this seems a picture for our times. 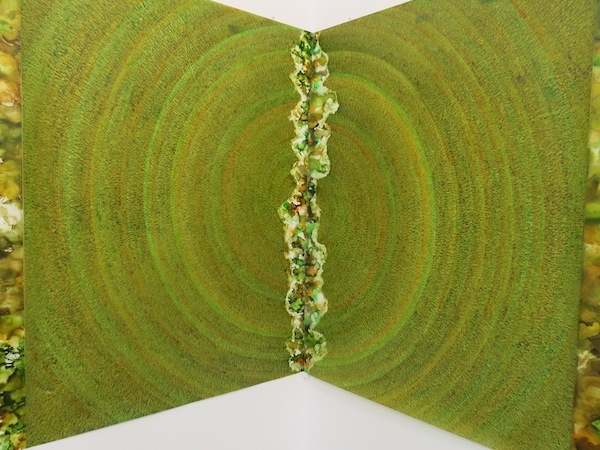 This is a detail of a piece by artist Sandeep Mukherjee called Untitled [pinwheel], that met the criteria, not least because of the green (that was somewhat brighter than in these digital images) but also because of the intense detail of the printing and the acrylic, a strong contrast between the luscious print and low-quality materials. 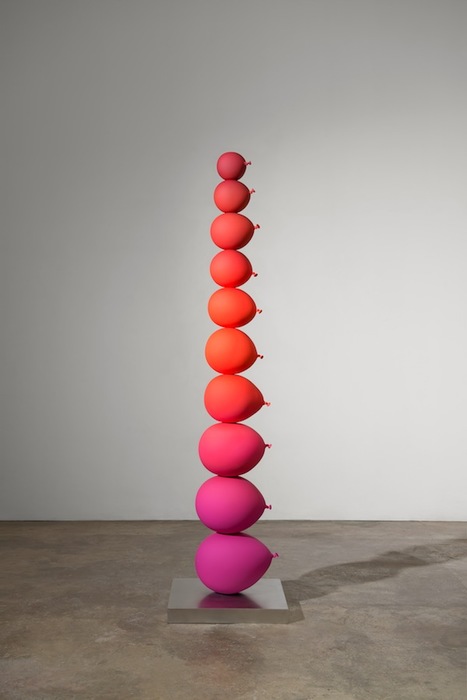 Ten Sizes of Breath by Gimhongsuk, made it onto the list on the use of color alone, but also because of the perfection of the balloons. 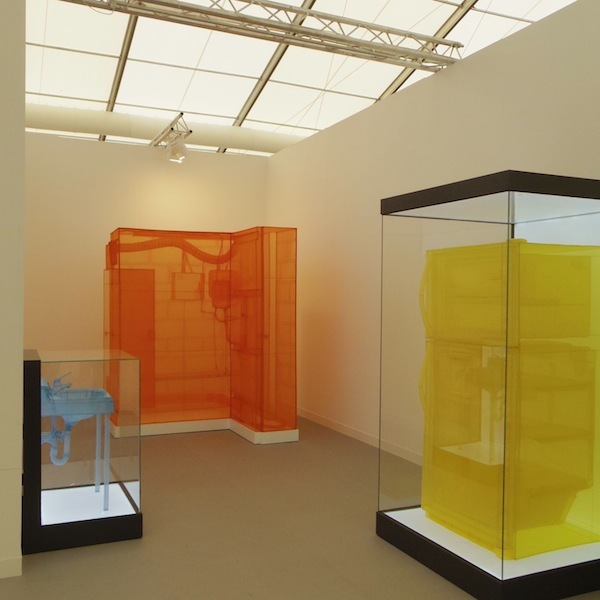 Then, we have the more established Do Ho Suh, who must have been particularly hot this year as he was being shown by three galleries. Do Ho Suh is kind of the older statesperson of this group, and his colors (here suffering somewhat from my photography) aren’t quite a lurid as some, but he gains inclusion as a kind of Rachel Whiteread hypermodern alter-ego. 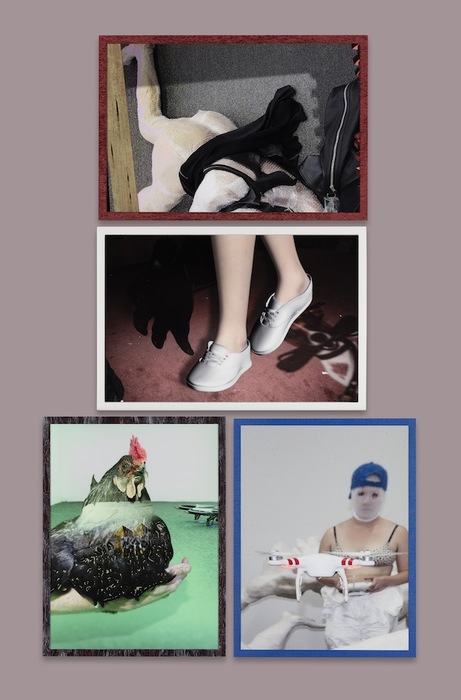 Finally, there's Ryan Trecartin. What can we say about Ryan Trecartin? Well, the American artist is the only Westerner on this list. His images are grotesque, and kind of faible, in a very appealing way, capturing this drone-flying, reality-altering, persona-creating, image-mediated-digital world in which we live.

Conclusions drawn from this exercise? Firstly, that it was interesting for me that the vast majority of work fitting my criteria didn’t come from Western artists or galleries. This perhaps shouldn’t be a surprise. I did question if simply a different visual context was the reason why I perceived these pieces as being "modern."

This might be true, or it might just be the case that Asia is a place where interesting work is being made at the moment. How exclusive my criteria were! In a sense you’d imagine that at one of the world’s biggest contemporary art fairs you wouldn’t be able to move without coming across the new, but this obviously wasn't the case, as so much of the work on display wouldn’t look out of place if shifted back thirty, fifty, eighty years into the past.