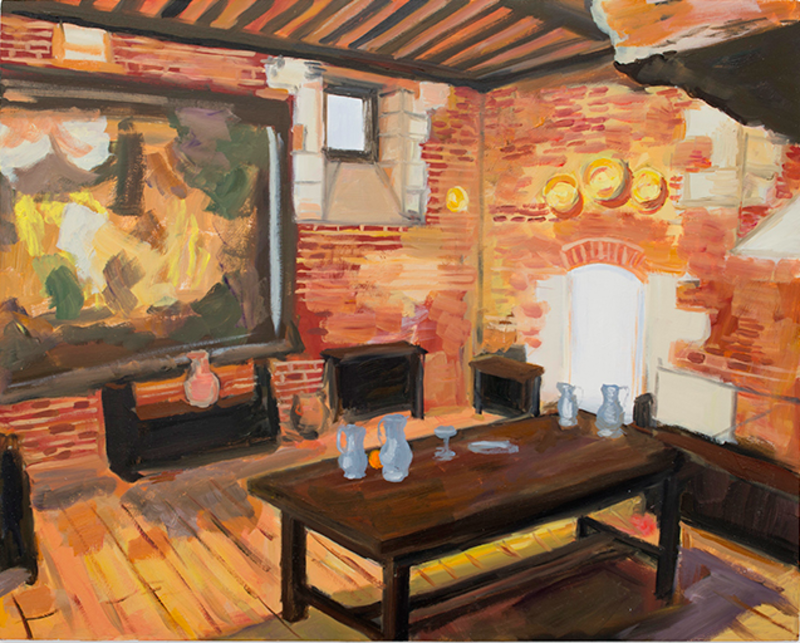 Karen Kilimnik's third exhibition at Sprüth Magers London is suspiciously restrained. There are no added period furnishings or colored walls—just two rooms of carefully sequenced paintings, with a pair of photographs (blue poppies and aging white roses) arranged either side of the doorway as a sort of parting flourish. A closer look reveals that the artist's trademark theatricality is still present, though subdued: the show is peppered with duplications, paintings masquerading as plates, and odd conflicts of scale (the paintings are small with cramped compositions, while the photographs are blown-up macro shots, large and breezy). It's a neat little cabinet of curiosities that should have the usual polarizing effect on its audience—Kilimnik's paintings tend to inspire equal parts love and despair.

Kilimnik's own excessive affections are always center-stage, in lieu of the artist herself, who is content to remain a distant admirer. She loves things that are popular, evoke sentimentality or adoration, or openly declare their attachment to eras or periods, genres or fashions. Her fondness for the mawkish is both embarrassing and infectious. Recurring motifs in her paintings include: celebrity waifs, pets and wild animals, picturesque views, Gothic mansions, ships, ballet, ornaments, flowers, and hundreds of other small fixations—each rendered with disconcerting intensity in Kilimnik's amateurish technique, so that it's difficult to tell whether her silky dogs and wide-eyed girls are sweet, menacing, or indifferent. 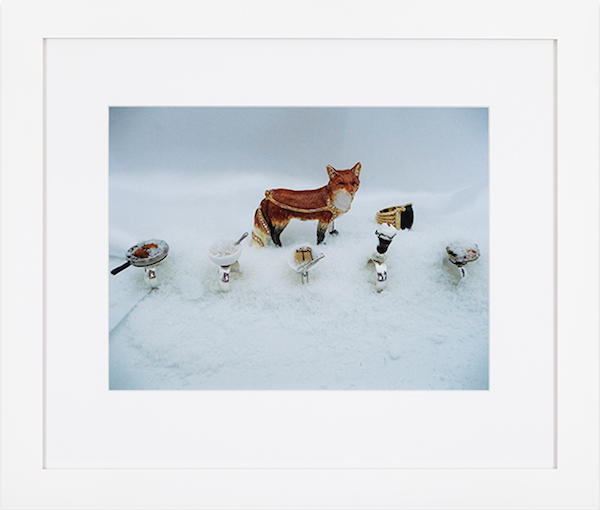 Her source materials are photographs and pictures in books and magazines—often images that are heavily staged (fashion shoots, publicity stills, theatre) or reproductions of reproductions (oil paintings, "authentically restored" period interiors, tapestries, collectables). Images that are popular or valuable enough to have been copied before appeal to Kilimnik. Not the cheap replications of branding, or consumer products—she prefers to appropriate images of things with an "aura," things that people revere for their originality or rarity, whether a painting by Degas or a supermodel. At the same time, her own thrift-shop painting skills and rejection of "tasteful" discrimination deflate the value systems that allow such hierarchies to evolve.

Recent fascinations on display at Sprüth Magers are Europhilic (where better to find old and rare things than in the Old Country?), Leonardo da Vinci, medieval tapestries, heraldry, World War II, and Delftware—a blue-and-white Dutch ceramic clumsier than porcelain, and with a history characterized by appropriation, translation, and reinvention. There is whole room dedicated to Kilimnik's Delftware-inspired landscapes of bridged canals and tree-lined paths, but any pretence of a "collector's set" is superficial: palettes of blue and lilac are not-quite-matching from one canvas to the next, and a tree is never painted the same way twice. Many of the wistful illustrations featured on Delftware plates and tiles are themselves based on works by Dutch landscape painters: a few strokes with Karen's magic brush and they are transformed back to paintings again, rescued from beneath the glaze. 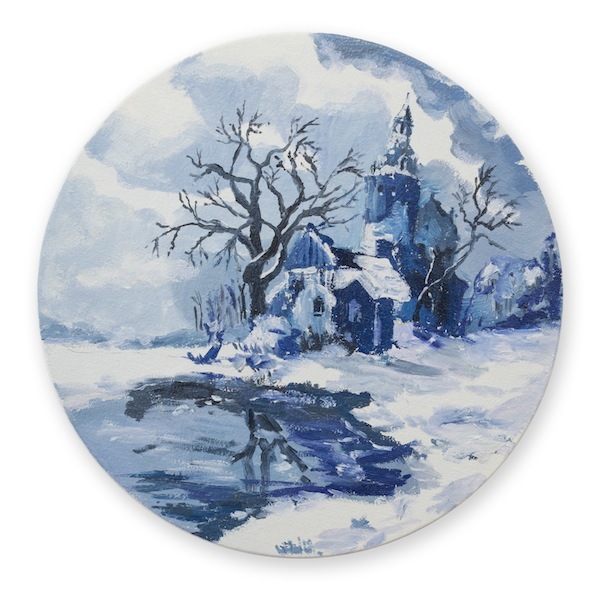 Kilimnik's long-standing interest in theatrical scenery, props, and backdrops is extended to the odd pictorial space of tapestries, and the touristic tableaux of stately homes, in which fashions and tools of diverse centuries are bricolaged together as "the past." This sort of compression is reflected in Kilimnik's claustrophobic compositions, in which even the air seems heavy with matter. A pair of paintings depict a hall in the Château du Clos Lucé in France, in which Leonardo da Vinci undertook his final "artist's residency": Leonardo da Vinci's last home—the dining hall (2014) and Leonardo Da Vinci's living room, Amboise 1500 (2014). Seeing these duplicate versions side-by-side, one is lured into a game of spot-the-difference—which soon turns into a game of spot-the-similarity, as Kilimnik's approach is fundamentally unstable.

Nearby is another double act—two close-ups of a woodland cottage scene cropped from a tapestry: the medieval cottage tapestry (2014) and the green fairie's cottage in the tapestry (2015). The latter includes a couple of lumpy fairies, doused in glitter; it's hard not to cringe. But it's also hard to look away: this conflation of the woven phantasmagorias of the Middle Ages, and the glitter-and-glue fairy paintings that adorn little children's bedroom walls, somehow makes perfect visual sense. 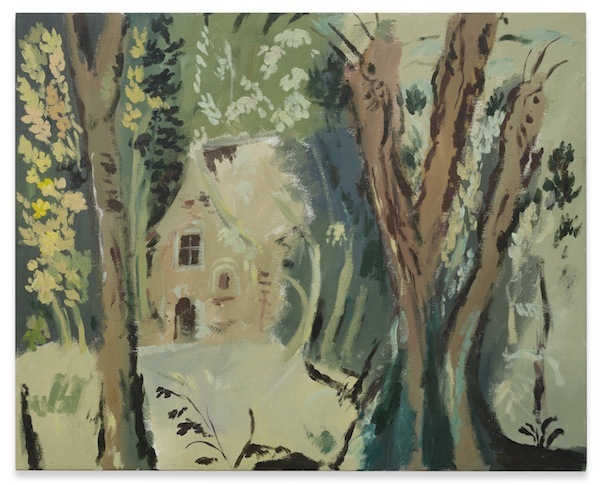 The exhibition's theme of domestic display is most clearly and cleverly distilled in the Fairy cleaning the copper pot with Fairy Dish Soap (2014), a still-life-with-fairy derived from Chardin's Still Life With Herrings (c. 1731). Proust wrote in a letter that “Before having seen some Chardins, I had never realised what was beautiful, in my parents' home, the table disarrayed, a corner of a napkin turned back, a knife against an empty oyster shell....” For Kilimnik, the discovery of a brand of washing-up liquid called Fairy conjures up a similar glamorous transformation of everyday life—a veil (of cooking grease?) is lifted from the eyes to reveal a shining new table-top world. Art and advertising are traced back to a moment of shared history in the still life, a genre in which material fragments bear witness to immaterial forces. 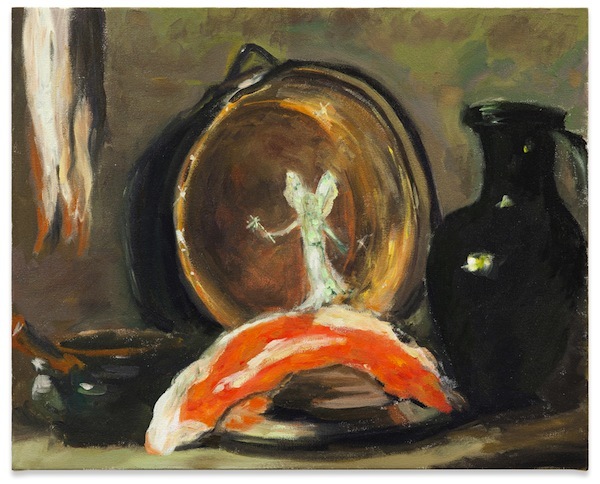 For Kilimnik, color reproductions and photographs are portals; clues to be interpreted; summoning rituals to be transcribed; trapped things to be rescued and set free. They are lenses through which history, fiction and autobiographical memory are concentrated into temporary narratives that overwhelm the source image—a Dutch cottage beside a frozen lake becomes a secret hideout in Poland during World War II; a fishing boat becomes a ghost ship. Her paintings are highly performative: in "copying" an image, Kilimnik is actually fleshing out the imagined narrative that she projects onto that image during her painting process. These thin films of preoccupation overlaying her paintings help to create the tension between distance and closeness that pervades her work.

Kilimnik's realm is the personal bubble, the daydream, the distracted train of thought, the private fantasy. The stories she enacts through her paintings are never put into words, only hinted at through the scraps of language that form her titles. Image-makers hope we will construct narratives around their images—stories reach out, build a personal investment, and hook consumers. Kilimnik's constructions are excessive, warped over-identifications that hjiack whatever vision is being sold and smother it with drama and cheap oil paints.

Kilimnik admires characters who know exactly what they like. She, too, knows what she likes; whereas the ambiguity and unevenness of her work keeps us second-guessing our own judgements. Her fulfilment leaves us feeling incomplete.