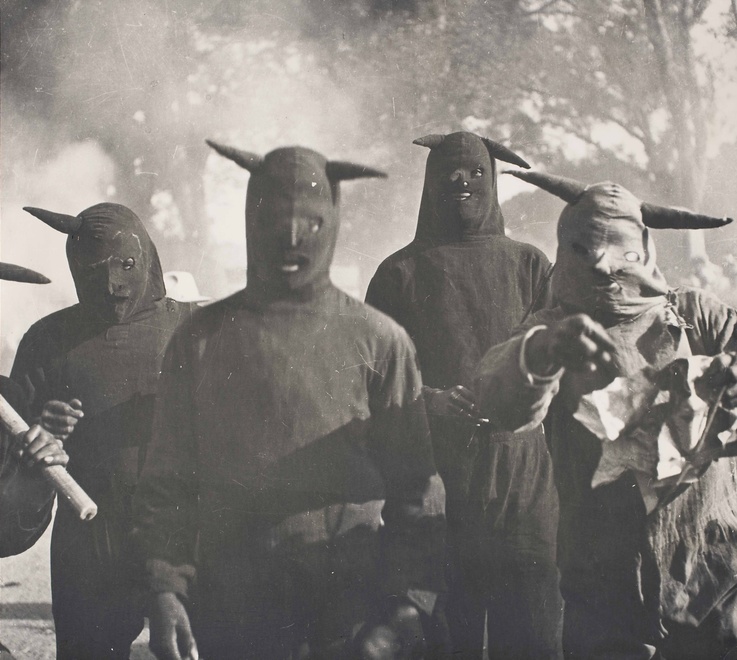 Displacements: the real and surreal photographs of Kati Horna

Despite being at the forefront of documentary photography during the Spanish Civil War in the 1930s and the Mexican Surrealist movement of the 1940s, Hungarian-born Kati Horna (née Deutsch) has remained relatively unknown outside of her adopted country of Mexico. Yet the art world has an ever-growing appetite for unearthing overlooked or forgotten perspectives that wind alongside the dominant Western masculine narratives of the twentieth century, and Horna is a perfect candidate. The focus on her work is entirely deserved; in this first retrospective at Jeu de Paume, Horna's photographs reveal a dynamic practice that was both highly experimental and explicitly political, coupling the social responsibility of the activist with the aesthetic playfulness of the artist.

A photojournalist, war photographer, artist, anarchist, teacher, and chronicler of the mid-century Mexican avant-garde, Kati Horna covered a lot of territory—both physical and creative. This attentive, neatly composed exhibition spotlights Horna's versatility, the series of migrations that took her from Hungary to Mexico via Paris and Spain, and the humanist thread linking both facets of her creative output: photojournalism and fine art photography. Curated by anthropologist Ángeles Alondo Espinosa and historian of the image José Antonio Rodríguez, the retrospective diligently ties each of Horna's works to its time and place, at the risk of imposing a purely biographical reading. But this is a show about looking, not reading; and as Horna was first and foremost a photojournalist, context must be kept in sight.

The unusual composition of Horna's practice—a mix of “straight” documentary photography, staged shots and narrative series, and photomontage—places her between two major visual languages of the 1930s: photojournalism, which had entered its golden age; and Surrealism, which was gaining international notoriety in its second decade. Though Horna was also in contact with other European avant-garde movements such as Russian Constructivism, the Bauhaus, and Neue Sachlichkeit, it was these twin influences that shaped her work from 1933 through to the 1970s. The pairing is not as incongruous as it might first seem. Surrealism had a notable political agenda—attempting to place “the psychic life of the artist in the service of a broad social rebellion,” as Andy Grundberg has termed it—while some documentary photographers represented the anxieties and detachment of Modern life by locating absurdity and the uncanny in the everyday. Furthermore, the boundary between photographic "truth" and fiction was dissolving as artists and advertising men explored the medium's capacity for manipulation.

The exhibition features over 150 prints. None of them are large or famous or flashy, but all of them quietly demand attention, and hold it. This is partly because of Horna's ability to compose and frame shots that are bold and striking, but with odd, intriguing details that keep the eye occupied and trigger the mind's desire for narrative. Her strong visual storytelling is at work both in single images such as Untitled, Carnaval de Huejotzingo, Puebla (1941) and photo series like Mujer y máscara (Woman with Mask, 1963). Both works express the Surrealist fascination with exoticism, performance, theatricality and ritual, and contain a mythic dimension that appears to have strengthened during Horna's Mexican period. 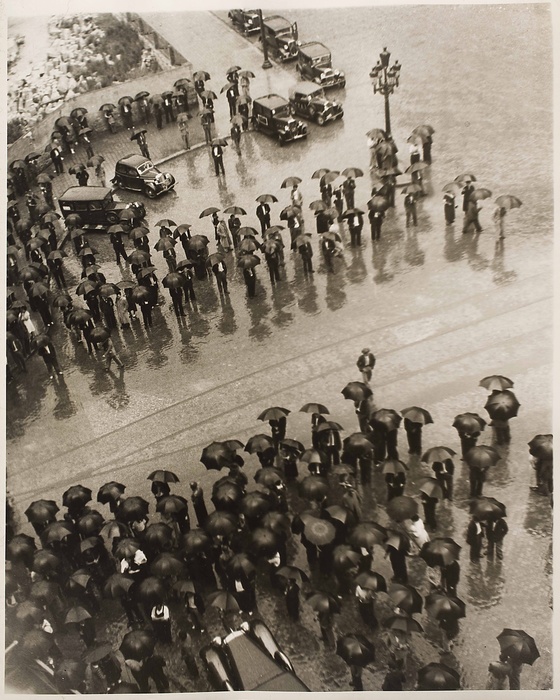 Whether incidental or staged, Horna's images display a high regard for human resourcefulness, resilience, and creativity. Commissioned by the Spanish Government to document the Civil War from 1937–1939, Horna eschewed frontline spectacle as covered by her childhood friend Robert Capa, and instead focused on the human angle: personal stories of dislocation and dispossession, told through both candid shots such as Los Paraguas, mitin de la CNT (Umbrellas, Meeting of the CNT, 1937) and lyrical photomontages such as the ghostly double exposure Subida a la catedral (Ascending to the Cathedral, 1938).

People—whether visible or not—are always at the center of Horna's photographs. Her prints demonstrate both the social concern of the documentary photographer, and the Surrealist fascination with the human form. The early works on display at Jeu de Paume demonstrate a propensity for tight cropping, dramatic composition, and unconventional perspectives, as well as the beginnings of Horna's lifelong interest in bodies and body-substitutes. People are photographed covering their faces in sleep, or from very high or low vantage points that foreshorten, lengthen, or otherwise distort their forms. An early photojournalism series, Marché aux puces (1933) depicts the readymade assemblages of the Parisian flea markets: things of the home displaced and rearranged in the street. Here, too, bodies are always present—dolls, painted portraits, busts, dressmakers' mannequins, statuettes—though not the stallholders themselves.

Dolls and masks are a recurring motif in Horna's work, as are other human surrogates characterised by abruptness and fixity: waxworks, skeletons, statues. People's relationship to the places, things, and surfaces around them is another central concern. A 1938 series, Childhood, depicts children isolated amidst ruinous urban landscapes; by 1939's Muñecas del miedo (Dolls of Fear), the children have themselves become ruins—dolls with detached limbs. Although Horna's photography is decidedly Surrealist, she fleshes out this backbone with a rich range of visual expression: illustrative, symbolic, metaphoric, literal, narrative, propagandistic, Modern, abstract, vernacular, Gothic, romantic. Her retrospective darts between the absurd masquerade of beastliness and creativity that is Pedro Friedeberg disguised as Zebra (1968) and the clean, Modernist forms of a series documenting Mathias Goeritz's Automex Towers for an architectural journal.

Accompanying the prints at Jeu de Paume are a selection of cultural, political, and news periodicals that Horna edited or contributed to, such as Umbral, Libre-Studio, S.nob,and Diseño. It's wonderful to have a chance to see these rare magazines, especially the Salvador Elizondo-headed venture S.nob, which only ran for seven issues in 1962 but is now regarded as one of Mexico's most innovative publications. Horna edited the Fetiches section, in which she published three series of photographs including Oda a la Necrophilia (Ode to Necrophilia) and Paraísos Artificiales (Artificial Paradises). The first series depicts a strange theatrical encounter between a veiled woman and a white, bed-ridden mask; the latter is a series of portraits of a dark-haired woman, impressionistically distorted through a large glass jar, a fogged window, etc. 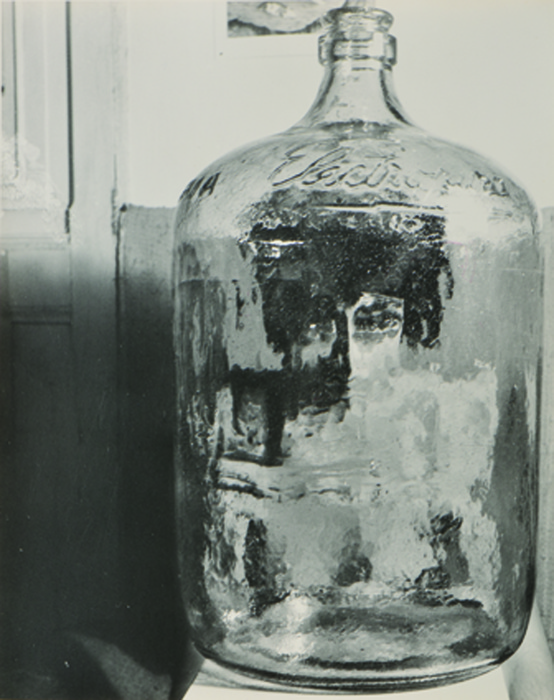 Displaced and dispossessed several times herself, it seems as if Horna sought other fragmented lives to photograph—psychiatric inmates, the homeless, soldiers, civilians uprooted by war. She also used her lens to further splinter previously whole bodies, by cropping, excessive foreshortening, substituting masks or dolls, covering with fabric to conceal and distort physique, double exposure, or photomontage. There is an inevitable vein of the unconscious sexism that accompanied Surrealist photography's disfiguring tendency towards the female body. Yet somehow Horna's photographs never feel malicious or aggressive. There is violence, but it's not of Horna's making; her people and places are always treated with respect.