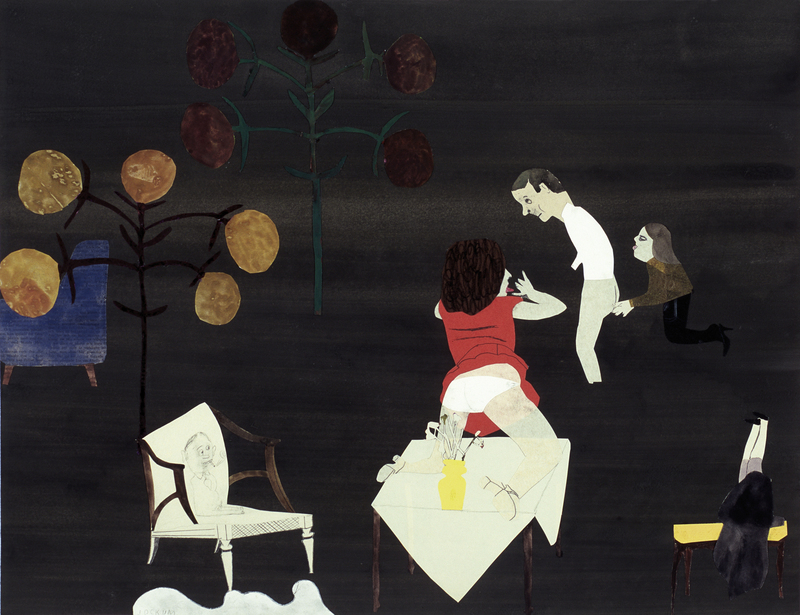 Things touch other things in unusual ways. Beautifully coloured and cut collaged pieces sit together awkwardly: a dog's paw on a woman's leg, a frog leaping from a horse's head, a man's chin touching another’s nose, a bee in the claw of a crab. Dandies, musical quartets, vomiting men, ships, horses, dogs, forests, crabs and sharks with open jaws engage in unwieldy meetings, or display themselves in careful poses.

Clusters of interaction—whether labour or play—are cushioned by giant spaces, voids that connect and separate, gaps in communication that weigh in from all sides. Content is constantly disrupted, marred with naughty scribbles, erasures, scratches and blots. Colours are earthy or watery, seeming a little faded even when fresh. 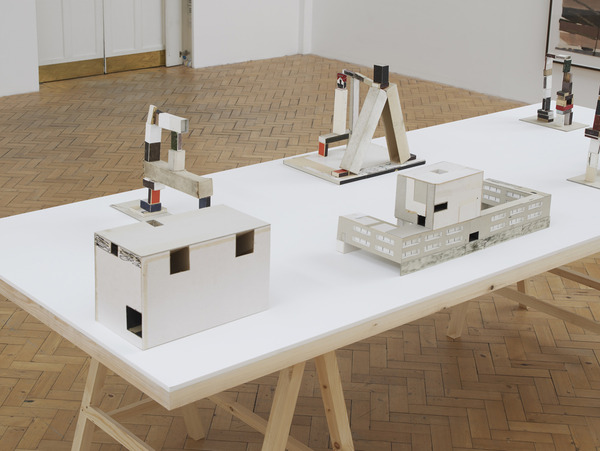 It’s easy to lapse into lists when discussing Nordström’s work. His subjects are so far ranging—despite the many repeats and returns—that it’s difficult to evoke the work’s sprawling nature without them. Though collage is arguably Nordström’s best-known medium, All I Have Learned and Forgotten Again is a seductive introduction to the artist’s broader practice, encompassing watercolour collages, graphite drawings and architectural sculptures made from cardboard and matchboxes. The title of the show is apt; in every media, Nordström keeps to the edge between learning, unlearning, and habitual gesture. The miscellany of characters and objects is matched by a medley of drawing and painting techniques: an underlying stylistic restlessness.

There are strong links to literature and oral storytelling traditions, as well as theatre. Certain works resemble re-imaginings of Greek tragedies, in which animals and humans share an earthly fate, united against the Gods. In fact, by drawing on eras from antiquity to the mid-twentieth century—with a propensity for Victoriana—Nordström's characters inhabit a 'past' which is less a historical representation than an amalgamation of those most interesting archetypes and objects that float free of the textbook or classic novel and wash up in the imagination like odd-shaped driftwood.

Nordström's architectural models are a well-chosen counterpoint to the works on paper, exploring similar fundamentals but in a more pared-back form. The matchbox sculptures are less recognisable buildings than they are collections of spaces to be explored: tunnels and arches, nooks and crannies, entries and exits. Collected together, the sculptures are like small, ruined monuments to the everyday: once useful things now powerless and lost. Triggers for fire become triggers for memories. Larger architectural models made from cardboard—off-whites and buff tones, the palette of an office filing cabinet—are more recognisable as housing facades or tower blocks, but are never complete. 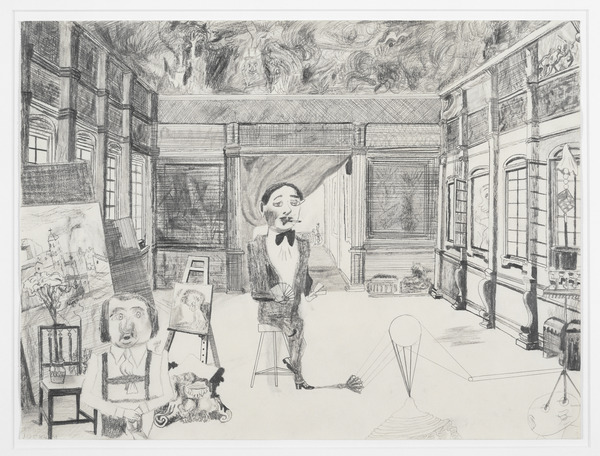 Scale and perspective are noticed, but not adhered to. A child's drawing of a house emphasises the door, because this is the part that has emotional and experiential significance; it is also the threshold between the outside would and the internal world of family, play and imagination. Nordström's models employ this same form of magnification, emphasising the spaces of experience and imagination from amongst these once futuristic social utopias.

It’s telling that the things of greatest importance to Nordström recur more frequently: adventurers (he wanted to grow up to be a sailor); musicians (he is musically accomplished); modernist architecture (he played in such places as a child). All I Have Learned and Forgotten Again reveals what happens when the subconscious subverts culture for personal use.

(Image on top: Jockum Nordström, Barndomens Definitiva Slut / The Final End of Childhood, 2001, graphite, watercolor and collage on paper; Courtesy of the Artist.)