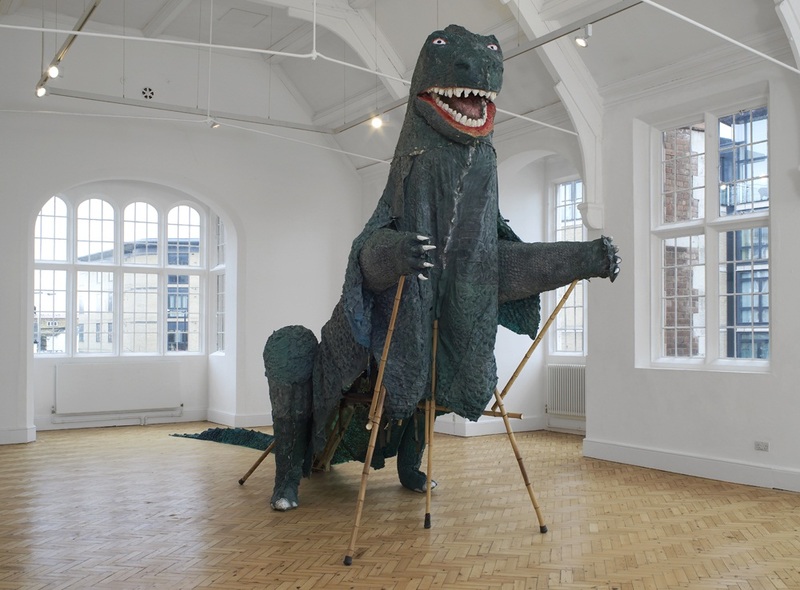 Serena Korda's work is a very practical sort of magic: evoking elaborate mythologies and belief systems of days past, while remaining firmly in the here and now through a lo-fi materiality and engagement with site and community. Aping the Beast, her current exhibition at Camden Arts Centre brings together three works themed around animals, animism and the power of ritual.

Dormant in the centre of the main gallery, like a B-movie prop in cold storage, is a fifteen-foot Godzilla-inspired monster puppet of textured latex over bamboo-poles. Three times the creature will be called into action, in performances devised by Korda to accompany the exhibition. The first, The Awakening, has already taken place: schoolchildren dressed as boggarts (mischievous household spirits) in wizened rubber masks performed a slow, considered dance around the beast, which then began to shake and move. A haunting live score by Grumbling Fur conjured a nervous energy that seemed to become both a summoning chant and the roar of the beast itself. 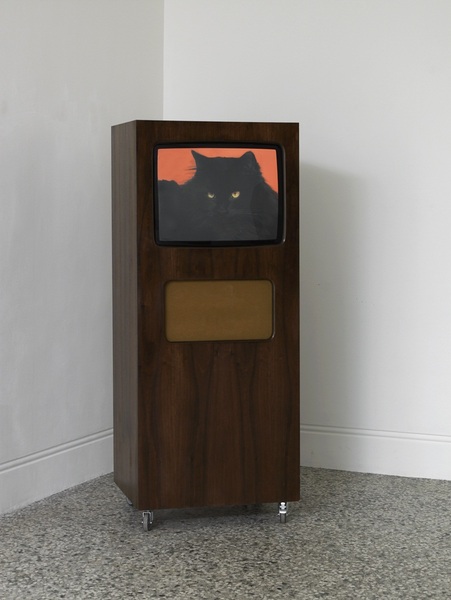 In the corridor space, a wood-panel television cabinet hosts The Prognosticator, a film of a black cat (selected through an apparently lengthy feline audition process) reclining on a cushion, administered to by its Mod chic owner. Portentous synth music lends drama and significance to the cat's stare, its gaze fixed beyond the camera as though witnessing supernatural visions. A spinning gold pendant features an optical illusion of a pyramid, alluding to the mysteries of Ancient Egypt with its animal-headed gods and reverence of cats in both everyday and spiritual life.

The final film, The Transmitters, depicts five young women in the throes of an uncanny singing, dancing ritual. Grumbling Fur again provides accompanying strings and vocal modulation; the musicians have prosthetic third eyes affixed to their foreheads. The girls move as a swarm, compelled by the increasing intensity of the humming strings and sound distortion to surge together and then apart, their movements a choreographed distillation of the behaviour of teenage fans at rock concerts.

There is something fatalistic in this scene: the musicians are a sinister chorus, a tangle of electrical cords at their white-spatted feet like twisted threads of destiny in a Greek tragedy. They move to circle the girls, microphones held out like Geiger counters, forcing their dance inwards and capturing the clicking of their heels, their rustling clothes, their bland, apathetic cries. Cutaway shots of a tarantula add to the sense of creeping menace.

Echoes of the 1950s recur throughout the exhibition—the dancers' gestures, clothing and hairstyles; the TV cabinet and bright Mod colouring of The Prognosticator; Godzilla itself—perhaps because that age is compressed by popular memory into an era of hidden powers, political machinations, conspiracy and cover up, where the line between fact and fiction wore away under increasing Cold War paranoia, the dawning of the New Age movement and the widespread adoption of television sets into family life. Social change, with its accompanying fears of instability and the unknown, required new means of cultural assimilation: hence the boom of the low-budget science-fiction film, in which less tangible terrors were disguised as monsters for the slaying.

It is this coping mechanism—fakery and allegory as manifestations of a need to bring order and meaning to a chaotic existence—that Korda reconstructs and plays upon. Her performances are origin stories, enactments of things and ideas coming into being, in which snatches and scraps of spiritualism, superstition, cultural codes, folklore and history are grafted together to form new traditions. 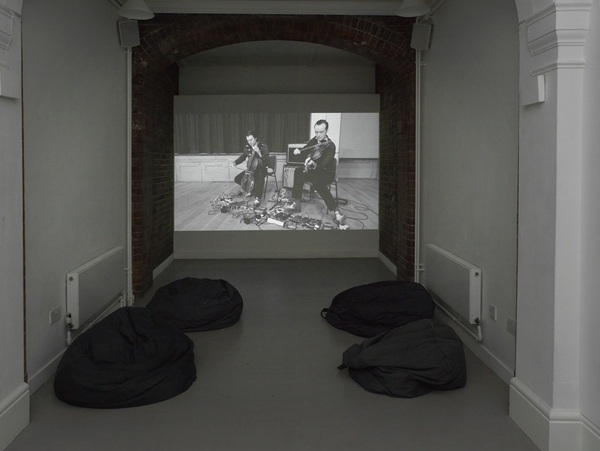 Myths require repetition to survive and evolve, and Korda integrates elements of rhythm and return on both visual and audial levels. In fact her works are powered by non-verbal feedback loops, whether it be the musician and the fan, the cat and its owner, or the monster and its awakening spirits. Each relationship involves a transfer of energy, in which an object or host is symbolically infused with anima—whether the literal activation of the monster by its puppeteers, or the seeming spirit possession that grips the dancers mesmerised by a siren song. The transmission of movement is thus also the transmission of meaning.

Korda's exhibitions often feel like the tip of an iceberg, their power generated by a giant, submerged body of research. Her performances inspire adventure and exploration—of arcane histories, of materials, of cultural symbolisms. Aping the Beast is a wonderful reminder of the pleasures of an enquiring mind.