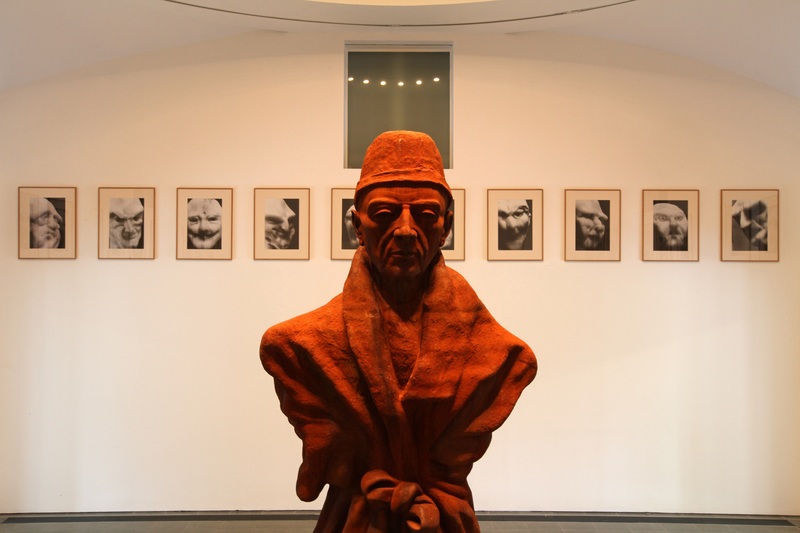 The Arrested Developments of Thomas Schütte

The Serpentine Gallery—which at times can feel like a summer pavilion, a cabin, a conservatory or a private chapel—always seems to attain its most sacred air in the autumn, when the light is failing and the mist rises to blur the view to the road. There is of course a certain degree of standard-issue white-cube-ness to the interior; however, this is offset by architectural hangovers from the building's past life as a 1930s tea house, and the gallery's most successful exhibitions tend to be those whose curation responds to these peculiarities of character.

For Faces & Figures, Thomas Schütte has played up the somewhat religious connotations of the Serpentine's layout, with its vestibule, central domed nave and symmetrically placed transepts, by drawing attention to the existing architecture and elaborating on its shrine-like structure. Sculptural pieces are placed centrally, like hallowed icons, while rings of grim faces cast in bronze or captured in stark monochrome photography stare down from their perches on high. There is a lot of empty space everywhere, recalling that hollow feeling common to the interior of churches. 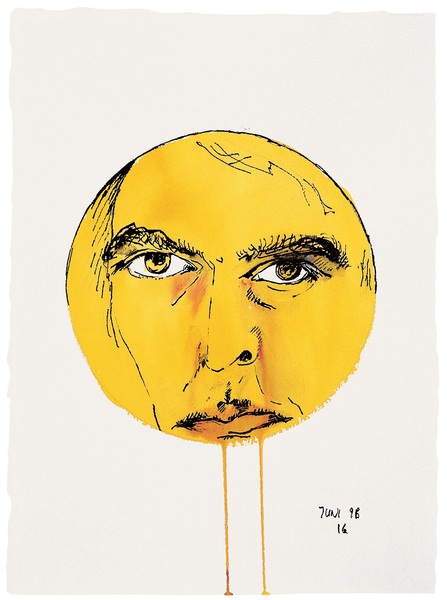 Schütte builds up this sense of a dominant power structure in order to undermine it. He is interested in the physiology of control and the formal language of authority, and how fluctuations in size, shape, material and site can alter perception and reaction. So it is with trademark low-key irony that he has filled this warm huddle of rooms at the edge of a wood (well, if it's dusk and you squint a bit, Kensington Gardens can almost pass for a wood) with various manner of disembodied heads, melding reverence with farce.

Schütte's figures are both awesome and pathetic. At the core of the gallery, like a pit in an apple, looms Vater Staat (2010), a hypnotic effigy in red rusted steel. Subsumed in a robe and cap, tall but armless, the figure seems bulky and forceful as you stand before it but slips into frailty as you move past this initial viewpoint to discover the true gauntness of its body, the narrowness of the waist, the folds of the robe doubling as loose flaps of elderly skin. The monumental is rendered anti-monumental by this one gesture, as Schütte reminds us that we can only really understand form in relation to our own bodies.

Other large sculptures are to be found nearby in the park—United enemies (2011)—and at the artist's concurrent exhibition of new work at Frith Street Gallery, where the front room is staked out by Krieger (2012), a pair of giant sentinels in stained red wood, the grain and knots writhing across their twisted torsos. What is it that is so disconcerting about these beings? Towering overhead, they make one feel like a minor character in some grand, long-forgotten narrative. The unvoiced joke is that Schütte is encompassing us in a miniature world writ large; these sculptures are all up-scaled versions of his comparatively tiny maquettes made from plasticine and scraps of cloth, which accounts for the nagging sense of dislocation and and is perhaps also why they seem to carry with them a vague vulnerability and loneliness—a lingering air of their true forms. 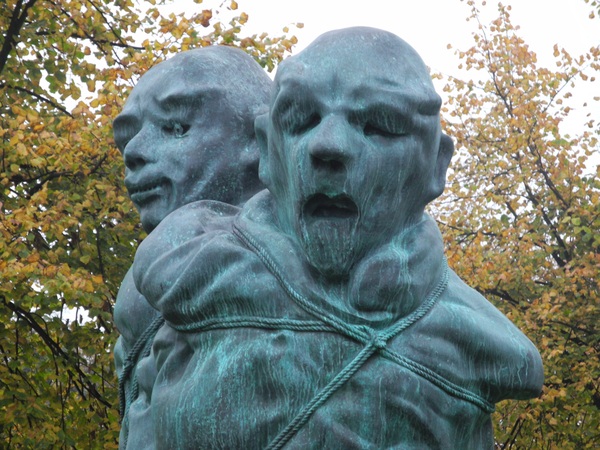 At the other end of the scale, diaristic, off-the-cuff watercolours are prominently featured in both exhibitions, signalling the importance of the sketch to an artist who is self-confident enough to let things bleed—that is, to follow the nature of a material to its logical conclusion. For plasticine and clay, this nature is to be bruised and pushed and grasped into shape, and Schütte's sculptures are laced with traces of gestures standing in for the effects of time and weather and sorrow: fingerprints around the neck, imprints of a blunt tool used to fashion cheekbones, a head that has been grasped and squashed miserably down into its own shoulders. Malleability haunts even the most rigid of materials. Looking at these works, it's impossible to ignore that behind mastery lies instinct, and that the origin of a bold bronze cast is a lump of sweaty plaster.

That which is deformity in a human is just form in a sculpture, and it is this point of crossover that provides fertile ground for an artist such as Schütte, who so obviously delights in the processes of making. Schütte's figurative work is almost always an excursion into the nature of the grotesque. Bakhtin wrote that “the grotesque image ignores the closed, smooth, and impenetrable surface of the body and retains only its excrescences and orifices, only that which leads beyond the body's limited space or into the body's depths.” For Schütte, the grotesque is certainly a form of spatial play defined by a transgressive relation to boundaries. He is adept at capturing instability and transitional states in a manner that evokes both discomfort and empathy, illuminating the lurking presence of the grotesque in modernist culture and asserting the continued relevance of its key components—hybridity, metamorphosis, deformity—to contemporary aesthetics.