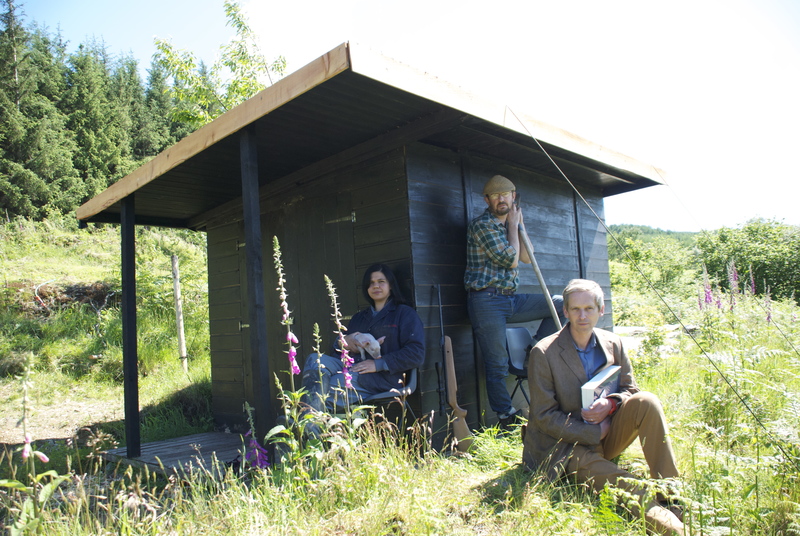 Food is pretty hot right now. Art is also pretty hot right now, perhaps hotter than it's ever been. And both appear to be crisis resistant. The fiscal point isn't however where the similarities end as, if we examine it, food production and artistic production seem to be intertwined in a strangely symbiotic, and occasionally dysfunctional, relationship.

It is not as simple as stating that artists like restaurants and chefs like art, although these things seem to be true; there appears to be an aspirational attraction in either direction, albeit perhaps a dangerous one. It was Anthony Bourdain who reminded us to "beware the chef who claims to be an artist," and likewise it takes only a glance over Marinetti's Manifesto of Futurist Cooking to realise this probably also works in the other direction (even if with the advent of molecular gastronomy his words seem more prescient than ever). Nonetheless with their concern for presentation, the search for new combinations, and focus on creating a magical experience we can see something artistic in the job of the chef. But what though, for the artist, is the attraction? Is it the idea of nourishment? Of feeding people? Or the draw of the quotidian? The way it interacts with memory? Or the way it interacts with our lives, running deep into all its structures, both private and public? Could this ultimately be the goal of art?

Another question is how does it do this? In the other direction, while high-end molecular dishes, like, for example, sardine ice cream, can be seen to be as challenging as any art, most of the time this isn't what people want. They want sausages and mash. The conflict has been illustrated with the Seagram Murals, which were deemed too depressing for the diners at the Four Seasons. The point made by Adrian Searle was that we don't go to a restaurant to contemplate our own demise. In fact, in a sense, we do exactly the opposite; we go to revel in a singularly corporeal pleasure, to wallow in life. This, barring examples like Carsten Höller's slides, is a rare thing in contemporary art.

However, while it's perhaps true that this difference exists, it also isn't sufficient to say it's this simple: that art is an elevated spiritual and intellectual arena, while food is one of base physical pleasure. One can quite easily get stuck in the aporetic between arguing that food is of a higher order than art, more important since without it we die, or vice versa following Bataille and saying that art is what makes us human.

Perhaps we should ignore dialectics entirely and accept it as a pinch of this and a pinch of that and put to one side meaningless conflict between two essential things. We can state that food has always been a rich source of inspiration for art, a trend beginning with Lascaux; and from Giuseppi Arcimboldo to Wolfgang Zelmer artists have been drawn to this base matter of life and humanity for use as, to name a few things, fetish object, meta-symbol, absurdist imposition, medium of formal expression and battleground of ideologies. As for the problems, we might just remember that for every third rate chef who thinks a thick slice of beetroot in a hamburger is a good idea, there is René Redzepi. Likewise with the artists.

Happily at this year's Frieze the place to go for a taste of the meeting of these two worlds is the somewhat unlikely collaboration between the bucolic English farmers of Grizedale Arts and the reformed-alcoholic political calligraphers of China's Yangjiang Group. Taking a slightly different approach to those mentioned above, while perhaps encompassing all of them, their Frieze project will be offering a diverse range of events, discussions, performances, and food, from their custom built pavillion. Their focus will be the "use-value of art". 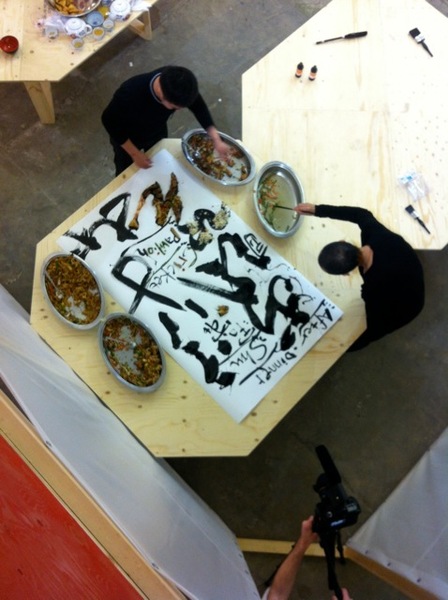 Can you say anything about the relationship between art and food?

Well the project is called the Colosseum of the Consumed and there are clear references there between the world of food and art and the state we're all in right now. Grizedale Arts is an art organisation based on a farm in the English Lake District. Food plays a central part in the programme because we tend to find food is a better form of communication for ideas than contemporary art at this time. The philosophy of our organisation is based around the idea of art being more useful in society and the use of food is a good demonstration of how creativity and aesthetics can play a complete and fundamental role in daily life, without specialised knowledge.

How and why the collaboration?

Frieze wanted to do something about food within the fair, as there is a perceived groundswell of foodiness in the art world, as there is in culture generally. But I think Grizedale Arts has built a reputation for, let's say, subjectiveness and honesty that meant we would perhaps give an angle that wasn't just lip service to a trend. After all we are actually farmers (registered with DEFRA) as well as curators and artists that have feet in both worlds — operating in our village in the Lake District and producing exhibitions and artists' projects internationally. The collaboration with the Yangjiang Group is a good example of that spread — working with an artist collective from Guangzhou to improve the conditions of life in our own village of Coniston. It's important in this to remember we are acting as citizens not just art people.

Is it going to be tasty?

Some of it will be tasty and some perhaps more thought provoking than tasty. Taste is an apt word in this context and there are a wide range of projects within the Colosseum that will cover most angles, from some of the best chefs in the land, to artists making tea, probably badly, and everything in between. Marcus Coates is even offering regurgitated food on his stall, that's not so tasty.

How do you think the context will work?

I'm quite looking forward to seeing the contrast between the extreme consumerism of the art fair and the base instincts of the project, presenting the simplest and most essential of behaviours. Franz West vs a potato cake.

What is the use value of art and why is it important?

The use value of art is something that has been forgotten, or lost in the last 150 years or so and something we are trying to reintroduce into the vocabulary of art. The use value of art in simple terms is being able to use art as a tool, or a means to and end, rather than an object of consumption. Most of the projects we produce these days are designed to have an effect in one way or another, outside the frame of art, in ways that can be valued without recourse to the support structures of the contemporary art world. In fact the Colosseum is that too, as a prototype and fundraiser for a new Cricket Pavilion for our village in Coniston. We all use art, some better than others, and this is particularly visible at an art fair, where people who know how to use art really well thrive. The trick is to remind the wider world that they can use it too, in the same way we use food.

What Do Artists Eat? Studio Cooking Serves Up Performance, Art, and Your Next Meal Meghan Gordon, Arden Ellis Surdam
11/9/15

Parallel & Simultaneous: The White Lodge
4/5/11
COMMENTS (0)
ArtSlant has shutdown. The website is currently running in a view-only mode to allow archiving of the content.