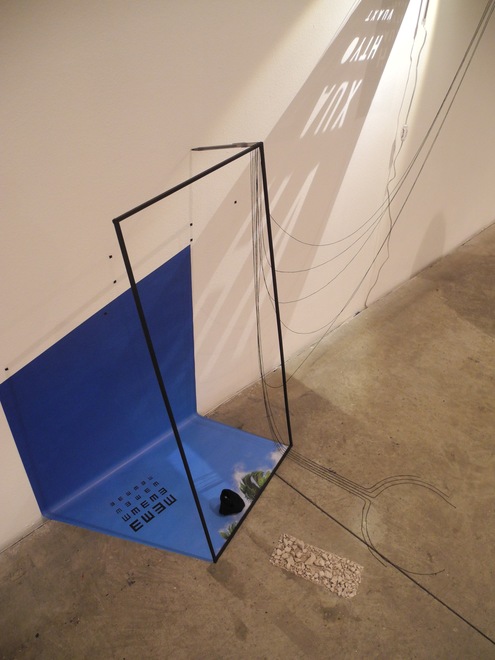 The Charm of Small Things

An over-proliferation of objects can be oppressive, even claustrophobic. Art that manifests in the familiar guises of consumption—from the tightly stacked shelves of a supermarket to the formless chaos of a rubbish heap—risks being choked by its own mass materialism, as subtler concerns are overlooked in favour of the clumsy and well-trodden path of consumerist critique.

For all their material abundance, Sarah Sze's installations at Victoria Miro do not read as a condemnation of a society obsessed with products. Moving amongst and around her arrangements, one does not feel weighed down by the presence of so many 'things'. Rather, the intricate connections she builds between objects—a thread wound around a stone; a wooden board balanced on a basketball; a small handful of clay moulded into the shape of a dead mouse—create a system of such delicately poised detail that one cannot help but undergo a sharpening of the senses, keen not to miss a single delicious moment. Sze’s installations are complex, but not overwhelming. She gives objects space to breathe, orchestrating specific interactions that are neither rigidly ordered nor arbitrarily compiled, but built according to a shifting inner logic that leaves room for the workings of chance and habit. 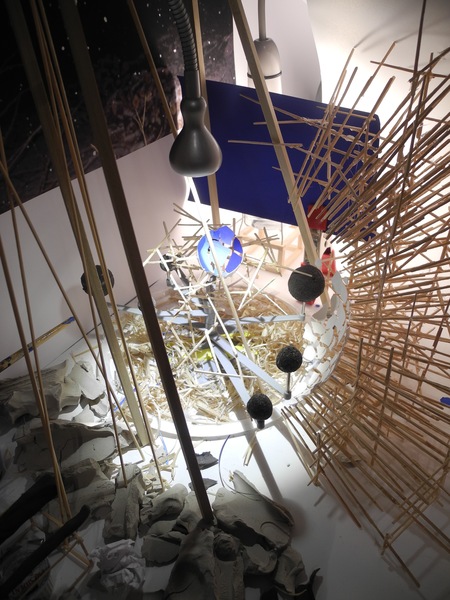 Sarah Sze, Model for a Print (detail), 2012; Courtesy of the artist and Victoria Miro Gallery.

These installations are an expanded structural exploration of those strangely intimate yet often fleeting connections we forge with the things of daily life: a favourite pen, a tiny piece of stray plasticine, a pile of spilled salt, a loose thread. Sze is concerned with matter, not materialism, and her work reasserts the emotional and tactile pleasure to be found in such odds and ends. Symbolism and science coexist: stacks of small black wooden sticks, geometric patterns in string, tiny balls of rolled clay, fish skeletons carved from styrofoam, rows of shiny new nails and screws, and rocks placed neatly on wooden stools are displayed side-by-side, like sacrificial offerings to the imagination.

The exhibition is split across two floors. Downstairs, several discrete works loiter at the edges of the room, each a Frankensteinian amalgamation of wire hanging racks, spools of yarn, mirrors, buckets, paperclips, matchsticks, and other neat detritus common to forgotten drawers or untidy studio workbenches. Awkward tentacles of string or metal clamber nimbly across walls and floor before suddenly expanding their slender protrusions outwards, as though attempting to colonise the void at the centre of the white cube. These works seem to be detail studies for Sze's larger, more complex installations, and exist as both completed composition and distilled moments of work-in-progress.

Upstairs, a dim attic-space houses one of Sze's focused concentrations of energy, Pendulum (2012): a stadium-shaped concave configuration of objects, lit from within so as to cast exotic shadows and scatter points of light like stars against the darkened walls. Pendulum is more overtly theatrical than previous works, recalling the form of a backstage environment that can be circumnavigated, but never fully entered: a secret garden of artefacts that is all the more enticing for being just out of reach. The circle of objects centres on a pendulum that oscillates with measured violence, swinging dangerously close to triggering a chain reaction of collapse amongst the objects beneath. This is movement as a permanent state of 'almost': an embodiment of the constant threat of disintegration that permeates Sze’s installations, which always teeter on the border between taut control and frustrated wildness. 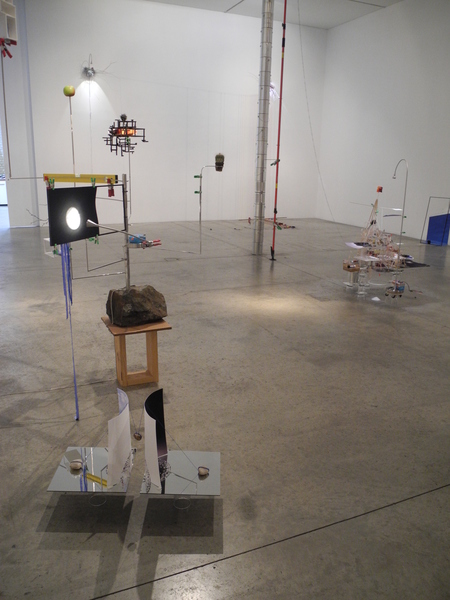 Her conglomerations are almost entirely synthetic, but evoke organic—even viral—growth structures. Sze reminds us that the very small can act in the same way as the very large, and that the patterns of atoms and the patterns of the cosmos have astounding similarities. Pendulum might be a worldview incarnate: a reflection of the human desire to simultaneously grasp both the complexity of the grand structure of the universe, and the minute details that characterise our daily lives.

(Image on top: Sarah Sze, Model for a Left Foot (detail), 2012; Courtesy of the Artist and Victoria Miro Gallery.)