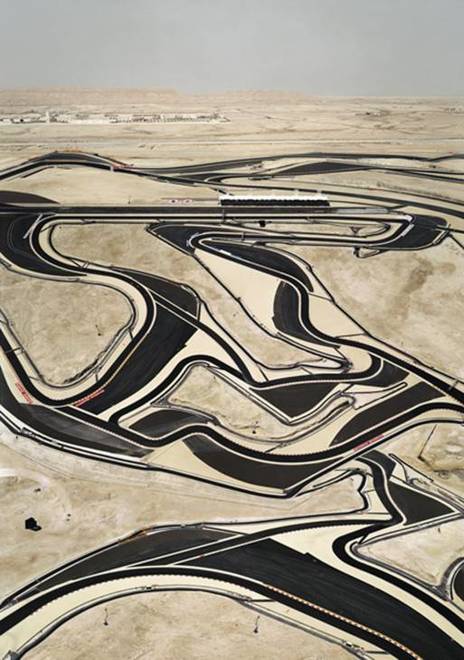 It was unclear to me why Andreas Gursky’s photograph of the Formula One racetrack in Bahrain I, 2005 was included in one of the chapters of the Patrick Keiller curated exhibition in the main hall of the Tate Britain. It may have been there simply because the photograph is owned by the Tate, but it looked out of place among otherwise de-aestheticized or minor works by other leading artists of the past three or four centuries. Similarly, Gursky being German and his subject matter being the Middle East, Bahrain I didn’t have any obvious connection to The Robinson Institute’s polemic on the sorry state of Britain as it is written across the nation’s landscape. Irrespective of its curious inclusion, I was excited to see the photograph in the flesh for the first time. And despite my repeated insistence on the impoverishment of photographic reproductions, I was still surprised to see how powerful Gursky’s photograph is in the flesh.

The first thing that struck me was the impossibility of the perspective on the landscape seen by Bahrain I. Gursky places us, at one and the same time, looking down from on high at the racetrack as it winds through the sand dunes of Bahrain, as well as perpendicular to a diminishing perspective. The built environment in the background, or at the top of the image, depending on how we look at it, recedes towards a horizon marked at its precipice with a sky erased of all detail. The simultaneous horizontality and verticality of Bahrain I, suspending the viewer in a contradictory indecision about how to look, is typical of Gursky’s tendency to push representation right to the edges of abstraction. In a compositional frame that is familiar from Gursky’s other landscapes in particular, the racetrack is simultaneously in the world and reduced to a two dimensional surface made representation by what could be plastic tape. Until, of course, the eye reaches the back of the image and the traces of human life have either been left, or await us, in the form of a man made environment. And then, in that moment of recognition of the city, the racetrack starts to appear to fall down the side of a vertical cliff. 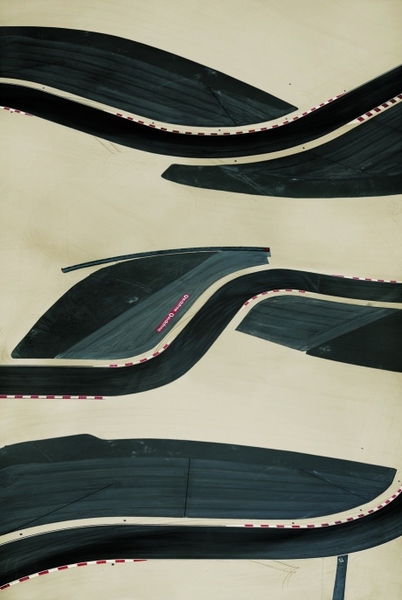 Andreas Gursky, Bahrain I, 2005 (detail); Courtesy of the artist
I have always been skeptical of the argument that the digitalization of Gursky’s photographs effectively erases their relationship to place, culture and politics. Bahrain I surely provides a sturdy example of how such photographs might be read differently. The dominance of this Kingdom in the desert, not only as it is symbolized by the Grand Prix circuit as home to one of the earliest Formula One races in the season, but also by its role in world business, are surely written in the sand by Gursky’s photograph. And in another prophetic script, what is perhaps most disturbing about the image is the thin, but shocking red advertising slogans on the side of the race track, larger than life. Thus, vodaphone also gets its chance to stake a claim on the desert landscape as well as that of the photograph. These realities, like Formula One racing, make Gursky’s image more than complicated aesthetic propositions.

(Image on top right: Andreas Gursky, Bahrain I, 2005; Courtesy of the artist)