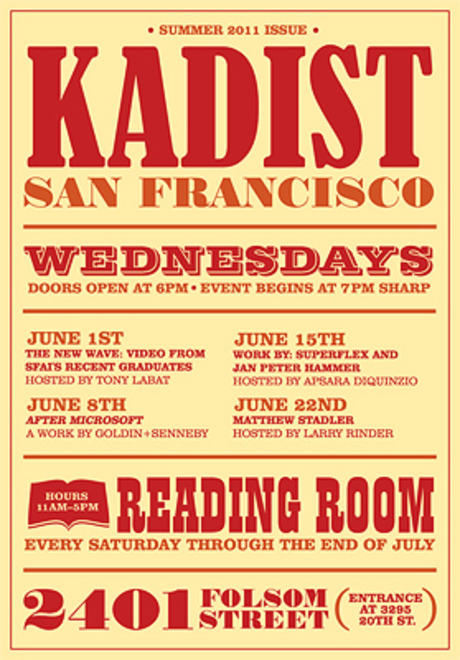 The Lure of Disaster

by Liz Glass
Regular Wednesday lectures and events at the Kadist have recommenced, and this past week on September 14th, Kadist director Joseph del Pesco welcomed Tony Labat and a full house of onlookers to LIVINGROOM 2.0. In this openly-structured event, Labat and del Pesco shared videos and writing contributed (curated?) by a group of artists that Labat had approached—from historical Conceptualist Howard Fried to emerging artists like Chris Sollars and Anthony Discenza. Rather than sending in artworks, per se, these artists sent in YouTube clips that somehow spoke to them. For Labat, he was interested in the way that media is dispersed and received, and what emerged was a handful of works relating—some in odd ways—to individual studio practices, conceptual art, and spectatorship.

The last video submission that Labat presented was sent to him by artist Whitney Lynn showing the gas deposit in the Derweze region of Turkmenistan that has been burning, in a crater-sized hole—the “gate to hell”—since 1971. In her explanation of the video’s significance, Lynn evoked Walter de Maria’s 1960 text, “On the Importance of Natural Disasters,” which reads:

I think natural disasters have been looked upon in the wrong way.
Newspapers always say they are bad. a shame.
I like natural disasters and I think that they may be the highest form of art possible to experience.
For one thing they are impersonal.
I don't think art can stand up to nature.
Put the best object you know next to the grand canyon, Niagra falls, the red woods.
The big things always win.
Now just think of a flood, forest fire, tornado, earthquake, Typhoon, sand storm.
Think of the breaking of the Ice jams. Crunch.
If all of the people who go to museums could just feel an earthquake.
Not to mention the sky and the ocean.
But it is in the unpredictable disasters that the highest forms are realized.
They are rare and we should be thankful for them.

This thought, presented by de Maria and epitomized in glowing red-hot reality through the video taken from Derweze, occurred to me again while re-reading Don DeLillo’s White Noise—in one scene early on in the novel, the characters are awakened from their individual stupor-like orbits by a plane crash. DeLillo writes:

That night, a Friday, we gathered in front of the set, as was the custom and rule, with take-out Chinese. There were floods, earthquakes, mud slides, erupting volcanoes. We’d never before been so attentive to our duty, our Friday assembly. Heinrich was not sullen, I was not bored. Steffie, brought close to tears by a sitcom husband arguing with his wife, appeared totally absorbed in these documentary clips of calamity and death. Babette tried to switch to a comedy series about a group of racially mixed kids who build their own communications satellite. She was startled by the force of our objection. We were otherwise silent, watching houses slide into the ocean, whole villages crackle and ignite in a mass of advancing lava. Every disaster made us wish for more, for something bigger, grander, more sweeping.

The confluence of these ideas over the past few days seemed kismet: a small coincidence that gives me a tinge of self-consciousness. I can easily understand de Maria’s perspective, can slip effortlessly into the mindset of DeLillo’s characters. I often find myself thinking over the phrase “this exhibition will/will not change your life.” In my better moments, I appreciate detail, am drawn into narrative, and like the quietness of static objects, but the expectation for art to take the form of a hammer over my head—or a landslide, earthquake, or endless burning hole—seems an all-too-easy default. As I fight against this impulse, this draw of the larger and louder—in art and other spaces—I find myself wondering this week: how can we learn to cultivate subtlety, gather patience, appreciate silence, and embrace nuance?

—Liz Glass, an artist and writer living in San Francisco.
Top Image: Poster from the June lecture series at Kadist Art Art Foundation.
Posted by Liz Glass on 9/20/11
Tags: land-art conceptual
RELATED ARTICLES
COMMENTS (0)
ArtSlant has shutdown. The website is currently running in a view-only mode to allow archiving of the content.