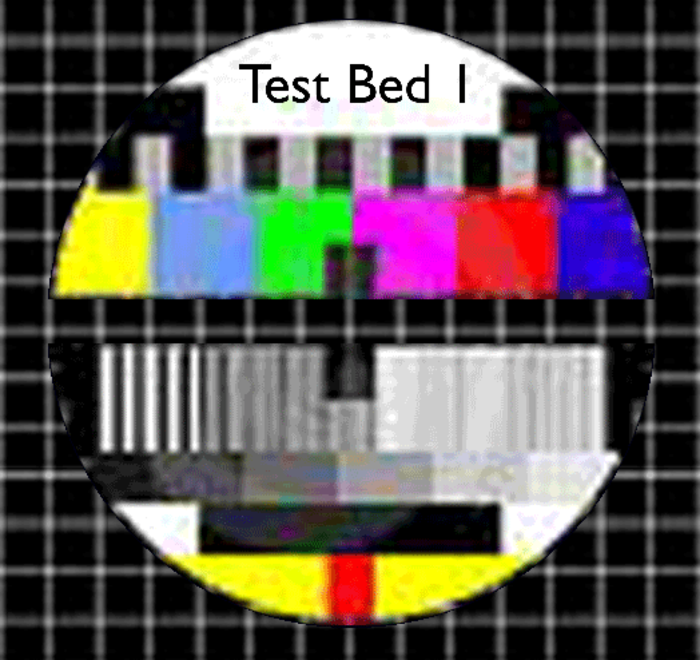 Over the summer Beaconsfield suspended its usual rolling programme and made itself available for a set of consecutive residencies. Renaming itself TestBed 1 for the occasion, the centre transformed its numerous galleries and spaces into a site for the production of 6 new digital screen-based commissions. Working within the limited means that TestBed offered, the organisers describe the scheme as a “curatorial mentoring scheme for emerging artists”, a choice of words which sounds like part education and part reintegration back into society.

Anthony Gross’ film Columbo in: KANE’s Revolutions borrows the character of the cult American detective (played in this instance by Douglas Park) to tell the story of Kane, an evil mastermind who is vying to become mayor of London. The plot serves as a vehicle to map the South London environs and the area around Beaconsfield itself. The film plays on our underlying suspicions of modernist architecture, politics and the dreaded “regeneration”. Icons such as the glistening silver box in the middle of Elephant and Castle roundabout are evoked as sinister and disturbing settings with great effect. To use a much over-used phrase, this piece is an example of psycho-geography; an attempt to map the effect of built environments on the emotions and behavior of individuals whether consciously organized or not. The choice to show the film in the adjoining railway arch contributed to a heightened sense of the uncanny.

A personal favourite was Pil and Galia Kollectiv’s snappily titled Co-Operative Explanatory Capabilities in Organisational Design and Personnel Management. Based on an online image archive documenting the construction and history of an early computer company, the fictional story tells of the development of an experimental approach to worker productivity into a religious cult. With a dry, amusing narrative reminiscent of Patrick Keiller’s Robinson in Space, the film juxtaposes images from the archive with far-fetched speculations on their actions. The economy of telling a story using still images is beautifully exploited and has a pace similar to Chris Marker’s La Jettee ( the film composed of stills upon which Twelve Monkeys was based).

Dafna Talmor’s SpaceShip Earth Build is different to most of the other works in as much as it is documentation of a process. Talmor (and friends) utilised Beaconsfield as a centre for recyling, production and community workshops – what they describe as “a training ground for a better world elsewhere”. The interest in the project lies in the palpable connection between environmentalism and fiction. Not so much the UEA scandal, climate change sceptic sort of fiction, but rather the assumption that much of our understanding about environmentalism is rooted in narrative fictions about Utopias. The physical manifestation of these ideas is a green roofed structure in the Yard at Beaconsfield which was built from reclaimed, salvaged and donated materials.

Many of the offerings that have come out of TestBed have the feeling of being sketches for future work which hold great potential. The organisers themselves point out the obvious constraints of budget and time placed on the artists, however one is certainly able to look beyond the production levels towards the promise of future work. The decision to give turn Beaconsfield into TestBed has certainly done what a good residency programme should and functioned as an incubator for young emerging artists and their nascent works.

All images courtesy the Beaconsfield