Manny Silverman, a native of Los Angeles, has been an active participant in the Los Angeles art scene for over forty years, beginning his career as an assistant at the Ernest Raboff Gallery in the early 1960s. During the 1970s, Silverman established a successful art framing business but his heart remained in dealing. With the encouragement of his good friend Sam Francis, Silverman opened his gallery in 1987 on historic La Cienega Boulevard and relocated to its present West Hollywood location in 1993. manny@mannysilvermangallery.com

Linda Hooper, Director, is a graduate of UCLA’s Art History program. She joined the gallery in 1991 after having spent several years in the New York art scene of the mid 1980s and then as part of the curatorial staff at the Museum of Contemporary Art, Los Angeles, CA. linda@mannysilvermangallery.com

Jamie Adams, Registrar, an artist himself and a graduate of Boston University, Jamie spent several years at prominent galleries in Boston and New York before joining the gallery in 2000. jamie@mannysilvermangallery.com

Established in 1987, Manny Silverman Gallery specializes in American Art of the Post-War Period with a strong emphasis on Abstract Expressionism.

The gallery became a member of the prestigious Art Dealers Association of America in 1994. 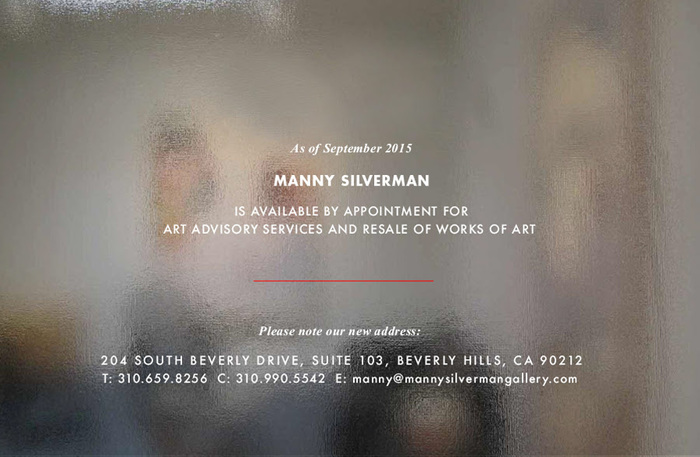