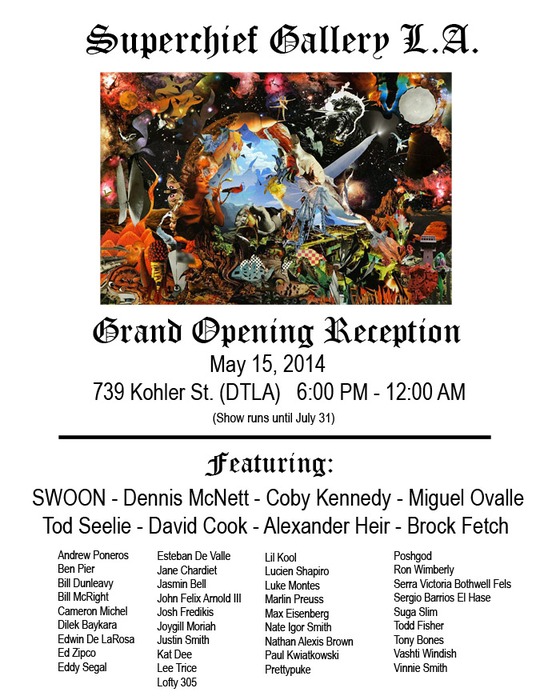 Superchief Gallery is proud to announce the GRAND OPENING and group show at its brand new Downtown Los Angeles location, opening May 15 and running through July 31. This is Superchief’s west coast debut, largest group show yet and most ambitious undertaking since curating 52 week-long shows on the Lower East Side in New York last year.

This year, the gallery has gone bi-coastal. As we continue curating exhibitions in the Lower East Side and in Brooklyn, Superchief Gallery is bringing it’s unique community of New York artists to Los Angeles. Like in New York, the DTLA space will host a wide range of community based events against the backdrop of art exhibitions, such as screenings, lectures, parties, artist residencies, releases and more. We’re excited to bring Superchief Gallery’s brand of visually engaging art to a Los Angeles audience, many of whom will be seeing our our community of artists’ work for the first time. Superchief Gallery L.A. is based in an enormous 4,000 sq. ft warehouse which presents the opportunity to go bigger and better than ever before.

We’re excited to be presenting the work of some extremely talented and upcoming artists including:

SWOON – One of the most acclaimed NYC-based street artists, she just opened her solo exhibition Submerged Motherlands at the Brooklyn Museum in April. She is best known for her delicately crafted and detailed prints which she has been wheat pasting and collaging into the urban landscape around the world for over a decade. She is also well known for her Swimming Cities project that took her around the world with her friends on sculpted art rafts. The voyage is documented in photos in Superchief’s L.A. debut by NYC-based photographer Tod Seelie.

COBY KENNEDY – Assault rifle vending machines and Brooklyn street signs re-appropriated into weapons are staples of the afro-futurist narrative Coby Kennedy develops with his work. He also spent six years in Japan designing concept cars for Honda before returning to the United States to begin making art for a living. Superchief Gallery’s L.A. debut will feature an 11 foot wide painting as well as new dystopian street weaponry from the artist.

MIGUEL OVALLE – With work ranging from 3d interpretations of graffiti to photographic experimentation of light and distortion, Ovalle’s wide range of work reflects his brilliance in the field of design. He even built himself a custom mutant fixed gear bicycle that blends seamlessly with his distinct brand of typography and aesthetics. This year Miguel Ovalle’s talents were appreciated professionally when he was hired as art director for fashion brands Alife and Supreme.