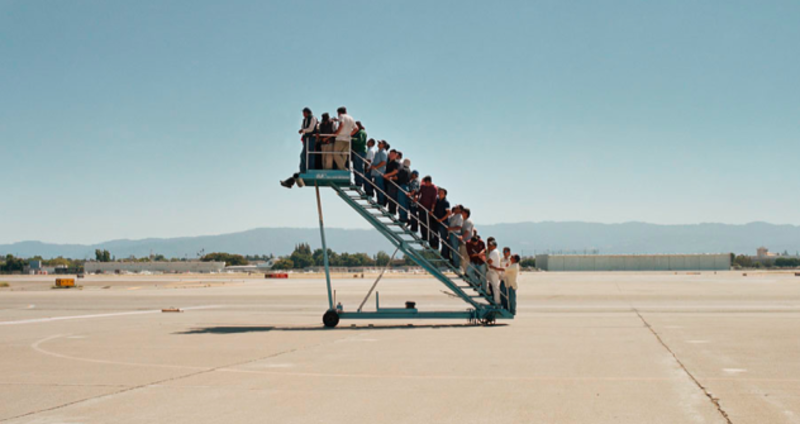 Though of course art has no rules, sometimes it finds itself falling into the terrain of soft sciences like sociology, with which its search for straightforward answers and clean conclusions sidelines certain aspects of art (aesthetics, ambiguity, open-ended inquiry) that, well, makes art art.

In the case of Post-American L.A., sociology is used to look at America’s projected shift and decline as seen through Los Angeles, ten years into the future. An intriguing and perhaps even noble venture, the works in this exhibition fail to justify its conceit. Combining elements of conceptual art, community collaboration, and the heavy-handed tropes of multiculturalism mixed with dashes of pedagogy, Post-American L.A. is disorienting enough, but a vision of 2019 L.A. becomes no more clear than what we might have – though preferred not to – already imagined.

Vincent Johnson comes closest at fulfilling this challenge with his literal stab at envisioning our future selves, with Mexican Los Angeles 2019 and Korean Los Angeles 2019, (both 2009) fun inkjet print photo montages that balance wackiness with austerity by way of convincing us that he’s captured the future. Something about the juxtapositions of taco trucks, stalls hawking wrestlers’ masks and eclectic architecture ranging from the sublime to the ridiculous in Mexican Los Angeles will make you a believer. The Korean version features a couple donning surgical face masks in the foreground of a smoggy cityscape; elaborate food porn; a cropped image of a woman brightly tattooed throughout her torso and face; and yet more crazy modern and futuristic architecture. In concert, the two visions are equally persuasive as a familiar yet foreign future.

Chen Shaoxiong’s Ink City, (2009) projects a full wall animation composed of ink drawings and a skittish ‘urban’ soundtrack. Though on some levels clichéd in its depiction of a hectic metropolis (Shaoxiong uses China’s Guangzhou as a source), the discordance between the audio and the images dials up the universal flavor of any number of dense foreign – i.e. non-North American – cities.  In the context of Post-American L.A., there is eventually a realization that, while L.A., with its endless sprawl, doesn’t currently take on quite the same mega-city vibe that one places with a Lagos, a Mumbai or a Mexico City, perhaps soon enough it will.

An iconic image from Adrian Paci’s Centro di Permanenza Temporanea (2007) shows a cluster of travelers crowding a set of aircraft boarding stairs on an empty tarmac. As intriguing as the photo may be,. the video from which it derives disappoints. In a series of long takes, the limboed travelers – mostly of Mexican and/or Latin American origin, it appears – are shown as the weathered victims of circumstance; they’re filmed with a slow ponderousness that comes off as preachy enough to recall the anti-litter television commercial of the ’70s, where one lonely tear drips down a manipulatively distraught American Indian’s face.

But such preachiness can’s always be blamed on the artist. Glenn Ligon is included in the exhibition with a large silk screen of a crowd of black hands in a black void; as a 13 year-old piece from an artist who’s never been associated with LA, the piece in the show’s context feels like an overweight brick of politically correct inclusion.

There’s no shortage of objects and text to take in in Post-American L.A., should one have the inclination to try and soak it in; but the payoff is less-suited to the art lover than the sociologist, with its uncomplicated hypothesis and readymade solutions. As challenging as it is to take on the present these days, if we are to contemplate our vaguely apocalyptic future through art, then it better, at the very least, be artful.