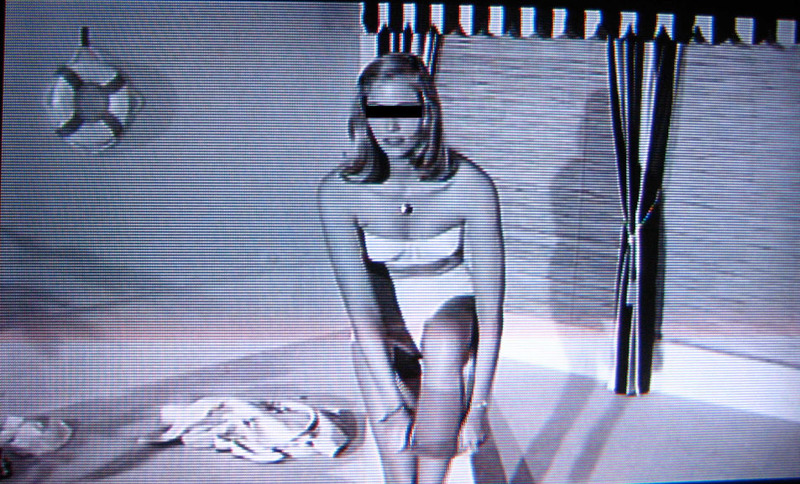 Even though many (if not most) of the eight artists in this swimming pool-themed summer group show are neither from nor based in Southern California, “Deep End” intriguingly taps into regional tropes of sunshine and noir in addition to seasonal tanlines. As curator Anat Ebgi reminds us in her exhibition text, the swimming pool is a fraught cultural symbol of both leisure and lust, childhood and drowning, suburban daydreams of the good life and shady visions tainted with danger. The pool, as an icon within the national collective imagination and fetishized in movies, belongs to Southern California mythology like surfers, palm trees, beaches, cars, and freeways.

All but one of the twenty-one works in the show have been made for the occasion, each a consideration of personal memories (recounted in short artists statements) and the often sinister undercurrents lurking in the pool’s deep end. Three of Alexa Gerrity’s paintings, all titled Close-up, 2009, beautifully capture the ominously woozey distortions dark water effects on aqua tiles plastered into a pool’s basin. A short looping excerpt from Gerrity’s Let’s Call it Valencia, 2009, combines sunshine-noir with Alice-in-Wasteland as a girl in a bright red trench coat, played by two different but interchangeable actresses, carries a dog across concrete drainage ditches ringing the pool-dotted backyards of a suburban tract housing development. Another looping short, Pool Party, 2009, by Jen DeNike, manipulates a tense and poignantly awkward scene of Cybill Sheperd self-consciously undressing for a nude pool party in The Last Picture Show.

In Eric Payson’s triptych of lightbox photographs, Memorial Day, 2009, the repeated image of a pool’s diving board shrouded in the stars of the American flag takes on a funereal air and imbues the garage space it is installed in with the religious aura of stained glass. Elizabeth Huey’s three acrylic paintings envision dream-like pastoral recovery retreats, lush hippie refuges where Bucky-Fuller-esque spheres with nautical portholes in Treatment Pods, 2009, perch on hills and float on bodies of water. They suggest the therapeutic and cleansing power of water, the serenity of weightless floating, and the fried nerves that yearn for such cooling calm.

Like so many themed group shows, “Deep End” is more of a quiet way to pleasantly pass the gallery’s last sleepy summer month than it is an effort to break new ground or formulate insight, but Ebgi has gathered a memorable selection of artists whose sense of play and thoughtfulness in their approach to the pool just may make you want to dive in.

Posted by Sarah Lehrer-Graiwer on 8/23/09
RELATED ARTICLES
COMMENTS (1)
Eric Payson
Okay, if Eric Payson is from the East, I'd never know it. He follows the cutting edge of lifestyles on the streetscape from a street urchin perspective in CA, AZ or any points West!
Comment by: Harlembrown on Tuesday 08/25/09 at 1:13 AM
ArtSlant has shutdown. The website is currently running in a view-only mode to allow archiving of the content.