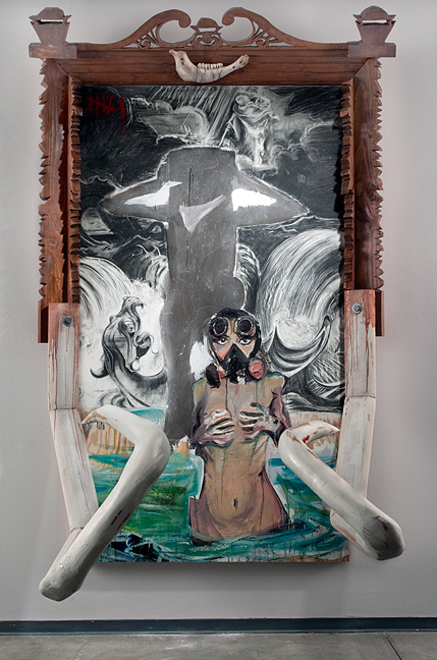 Tales of the Flesh are tales about the spirit and flesh.  Does an unrequited love of the spirit live in the hearts of these five artists?  Whether it does or not, mutiny is not an option.  They're in it for the long haul.  Their personal battles pulsate in their work.

Liz Young's family portraits are a host of small scale paintings of her family and herself at various ages.  The portraits are exhibited in the gallery the way they might be found in her grandmother's living room.  The wonderment of these portraits begins with Liz's blood as her painting medium.  Blood as an art medium has been used since the caveman began drawing in his cave.  Human blood in rituals is a shortcut for making contact with the spirit world.  Liz's creative riturals address the profound intimacy and connections she has with her family.  Liz's portraits at various ages indicate how time overlaps in familial situations.  In one portrait she is a little girl, in another she looks more like grandma.

A couple of feet away from Young's work are Arne Svenson's death mask gelatin prints.  Svenson wrote that these masks are "fornesic facial reconstructions" of unidentified corpses that he discovered while at the Mutter Museum (a medical museum) in Philadelphia.  While anonymous, the individual spirit of each subject is omnipresent in each photograph.

Between Sheppard's substantial paintings are Kaitlynn Redell's three paper cut pieces derived from movie posters of Bruce Lee.  While he was alive Bruce Lee was considered to be super-human and a living icon.  In death his legend and his spirit continues through his films and devotion of people worldwide.  Redell's kinship to Bruce Lee is ancestral and creative.  Being third generation Chinese on her mother's side, Redell has experienced first hand the perception of Western Culture on Eastern culture.  Her introduction of the traditional craft of paper cutting is transformed into three mosaic poems that are linked with Bruce Lee's martial arts postures.  Also, as seen in Eggroll Master 2009,  the super-imposed cut figures, encompassing the original poster, appear to be spirit guides and protectors for the phoenix-like Bruce Lee.

Carole Caroompas'-Before and After Frankenstein: The Woman Who Knew Too Much: The Couple Who Had No Umbilicus, l994, and Hester and Zorro: In Quest of a New World: A Living Hieroglyphic, 1995-96, lament the importance of keeping love in motion.  Before and After Frankenstein...describes creating the perfect mate.  Hester and Zorro...strongly reminded me of The Marriage of Giovanni Arnolfini, and the painting's representation of a marriage certificate.  Caroompas confirmed that the female figure was taken from an unknown mid-fifteenth century Rhenish painter called The Witchcraft of Love.  She's Giovanni's wife without her clothes. In the painting, she is practicing magic-perhaps a love potion for the man at the door.  In Caroompas' painting she seemily walks out of the canvas.  The multi-cryptic painting gives the maiden-witch tattoos from various cultures such as images from Posada's Mexico.  The gallaxy-stained canvas is layered with a spider web design the keeps the figures and their hieroglypich wish a reality. There is also a humorous border of Halloween witches brewing up their brew.

The commonality of these five artists is determined by their individualized focus on conveying their personal messages-whether it is with their life's blood, photographs of corpses, contemporary and mythical iconography and extenuating circumstances.