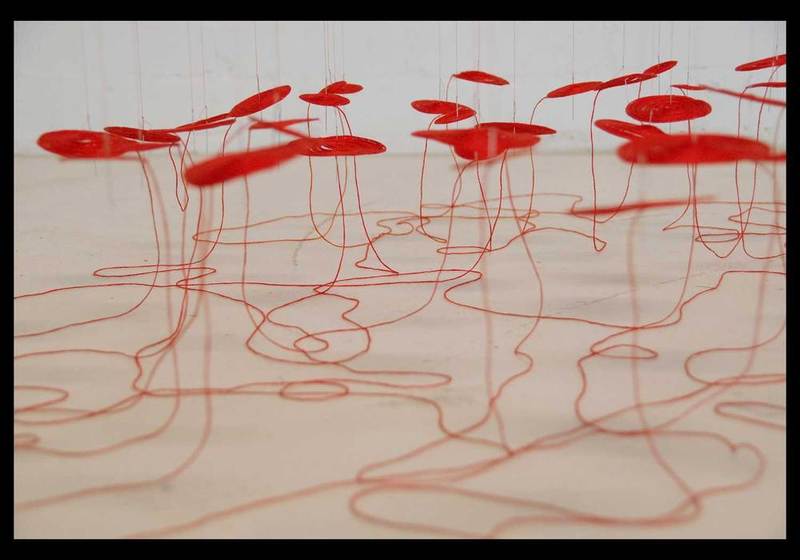 The Wafting Bouquet of Artistic License

I was fortunate to meet Beili on the opening night of her exhibit at the newly located Tarryn Teresa Gallery.  She generously gave me a personal guided tour of each of her pieces in the show.  Beili's Chinese ancestry, its myths, and spirituality, is a dominant presence in her current work.  Before writing the article, I promised to give her a call.  Our telephone conversation took place before the final week of her exhibit.  Prior to our conversation, I had drafted her article in several ways.  However, it was not materializing until we had our second conversation.  The synthesizing of the article was in the interaction and the interconnection with Beili-the artist.  Beili made similar references during our phone conversation when she said that originally her work was about building "cultural bridges" but then realized that she was seeking a "universal " approach and "how people connect".  She continued to define her current art work with words like"fate", "intuitive" and "common thread".

Beili came from China in 1995 at age 21.  In this short time, she has exponentially navigated through the English language and American culture.  Her current exhibition reflects her American influences with the video "Tie and Untie".  In the video, Beili's hands are seen tying and untying red threads under water.  Even though the video is an entity in itself, it appears to be a symbolic demonstration of the installation in the next room named "Lure" which consists of hundreds of 2"-5" coiled discs made and suspended from red thread.  I told her that Americans love "demos" and genuinely express curiosity about how things are made and enjoy recreating them in their homes.

As the choreographer of the exhibit, Beili stated that the dance began with the video, and moved through "Miasma", the installation constructed from wool thread and acrylic medium.  "Miasma" is a forest of shredded dark gray wool fibers hanging from the gallery ceiling.  Miasma by definition refers to a menacing atmosphere of harmful fumes.  Beili was intrigued by the sound of the word and described miasma as representing a dark cloud and worry of our current time.  She questioned the concept of disease being transmitted in the air.  She spoke of the wool fibers as "calligraphic" and "smoke columns rising  or falling".

"Lure" which is the most significant piece in the exhibit, was a counterpoint for "Miasma".  "Lure" was previously exhibited in San Francisco, however Beili indicated that the wide open space of Tarryn Teresa's gallery encouraged "Lure" to transform and grow. Also, the white floors of the gallery strengthened the beauty, clarity, and desirability of the work.  "Lure" was based on the Chinese myth that lovers have red threads tied to their ankles at birth.  Each person has to find their soul match as they journey through their lives.  I imagined, the monochromatic, ripe-tomato-red threads, to be Beili's dedication to the heroic flag of China.

The culminating piece of Beili's dance was a 7'5" disc made from the roles of Chinese Spirit Money.  Half the roles are burned and the other half remained in tack.  The spirit money is ceremonially burned as prayers for ancestors on Chinese New Years.  According to Beili, the white gallery floors also characterized "reflection" and "ancestral presence" over the "Lure" installation.  She also portrayed the distinctiveness of "Origin" as a "meta-guardian", "angel", and "ally".

Beili orginally was trained as a graphic designer but her aesthetic trademark changed during her time in graduate school. She wanted to create work that would be visually interactive for the viewer.  With regards to the prevailing labor intensive quality of her work, she said that she had a "fast learning curve".  Also, she describes the industrious feature of her work to be about  "energy", "breathing", and "the presence of labor"-"a happy slave".